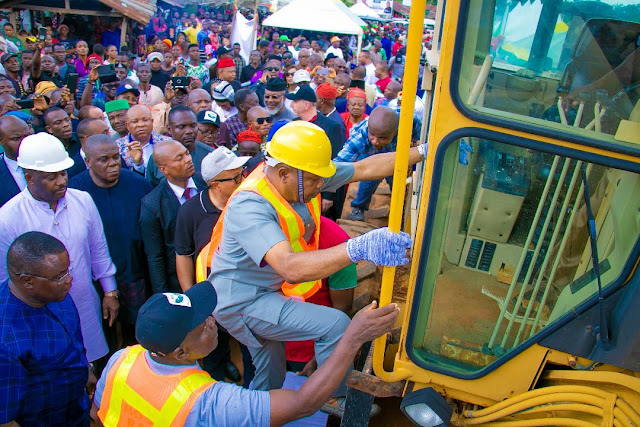 –WHILE WE CELEBRATE IHEDIOHA, WE SHOULD THANK OHAKIM, OKOROCHA AND MADUMERE

The good people of Imo State are now in high spirit anticipating and celebrating the expected positive impact on the rural road networks the flag off of the World Bank assisted Imo Rural Road Access Mobility Projects, RAMP-2 which will touch in many ways the socio-economic and development life wire of the Eastern Heartland and increase its value chain.
This laudable project was an initiative of the Ikedi Ohakim led New Face to Imo administration which ended in 2011. Ohakim after he successfully initiated, launched and flagged off his administration IRROMA Program (Imo Rural Road Maintenance Agency), used the template and approached the world Bank, United Nations and other development Partners. Ohakim’s administration made the application and paid a counterpart fund of N160 million as well as open a joint account with the development partners at first Bank, Owerri. But unfortunately, he lost his reelection in 2011 and handed over to Rochas Okorocha led administration.
Okorocha saw the project in Ohakim’s handover note but failed to take it serious in his first tenure. When some smart brains in his administration pressured on Okorocha, he set up a committee in his 2nd tenure headed by his then Deputy Governor Prince Eze Madumere to pursue the project earlier established by Ohakim.
The over 380 kilometers of rural roads rehabilitation and construction will be funded by the World Bank, through the AFD, Agence Franchise de Developpment or the French Development Agency valued at the cost of 60 million United States of America dollars equivalent to 21 billion Nigeria Naira ($60m =21bn).
Madumere’s Committee which includes Commissioner of Finance Imo State, Dr Edward Ihejirika, Transition Committee Chairmen, Traditional Rulers, Town Union Leaders, Youth and Women Leaders were all involved to work out plan with the representatives of the world banks and other development partners. It wasn't easy at all. Along the line, there were problems because of Okorocha's interest of control which did not go down well with the rules and regulations guiding the processes. He was later made to understand, that the money will not be given to Imo State government, rather his government should lead by showing the representative of the world bank rural agrarian roads that encourages commercial agriculture and trade. One major condition, the beneficial communities MUST be an agaric producing community with a known market. No sentiments! 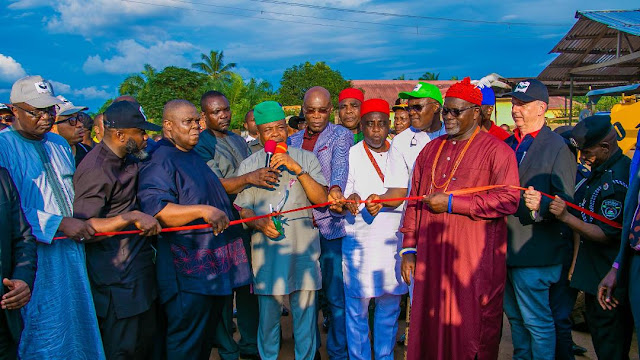 The selection of the road and mapping was difficult because development partners were strict to global standard rules, regulations and procedures. At this point Madumere under the instruction of Okorocha continued to pursue the projects after their own (development partners) payment was lodged into same first bank account opened by Ikedi Ohakim.
The Okorocha’s Commissioners of Finance, Iyke Njoku from Ezinihitte Mbaise, Obinna Mbata from Owerri Municipal, former Commissioner and then Special Adviser to Governor, Dr Edward Ihejirika from Ikeduru, TC Chairman, Traditional Rulers leadership worked day and night with Engr Uzor who coordinates for World Bank and Mr Okey a top Imo State civil servant whom all documents lied in his desk worked day and night with the Federal Minister of finance, Femi Adeosu, National Assembly, etc and successfully it was pulled off.
The contract bidding was done by the world bank development partners themselves through a rigorous bidding process as advertised on national newspapers and televisions . The roads were all mapped out and contracts awarded. The intent of the multilateral and other World Bank donor Agencies was to assist underdeveloped countries to curtail immigration and invasion from into their cities from undeveloped nation. There is no free money in the world, rather interest!
Again in keeping to world Bank rules, states that was in election period were refused access to the money until after election irrespective of who wins.
Construction and rehabilitation of 380 kilometers is no doubt, a big achievement that must be commended by anyone who truly loves Imo State, no matter, the side of the political divide we find ourselves. The local farmers, the petty traders and everyone who has one business or the other to do in Imo State, will definitely benefit from this very wonderful project. While we congratulate Governor Emeka Ihedioha for keying immediately to this wonderful project, Imo people are the ultimate beneficiaries.
The AFD assisted Rural Access and Mobility Project (RAMP) is majorly aimed at opening up better economic access to the rural communities through targeted improvement in road infrastructure. This is in turn, expected to shore up opportunities for rural farmers and other small scale businesses, thereby, enhancing economic opportunities, security and general living standards of the people.
Being an international intervention agency, the National Assembly, Federal Ministry of Finance and of course, the presidency needed to make inputs before Imo could access the funds needed for the execution of the projects.
One of the major selling points in Imo's push for the RAMP projects is the indisputable evidence that the State had done a similar project on its own before seeking for help from the World Bank and its partner, the AFD. Yes, you can hate the face of Ikedi Ohakim, you can't fault his IRROMA initiative and programs, like his other initiatives, IMO CLEAN AND GREEN, OGUTA WONDERLAKE AND CONFERENCE CENTRE, IMO RING ROAD, IMO FREEWAY, OAK REFINERY/ PETROCHEMICAL , etc, good government with focus on developing Imo State should seat down with Ohakim. Yes, no one is perfect in life. Ohakim may not be perfect but you can't fault his Imo development blueprint.
An Imo son, one of the signatory to the account in First Bank, Bar Kelvin Ikechukwu Nwadike while reacting to misinformation credited one Fcc Jones Onwuasoanya had this to say.
"For not recognising the contributions of Ikedi Ohakim who laid the foundation makes you Lie Mohammed  Ohakim paid the  first counter part fund of 160million naira being Local Government contributions the name of the is RAMP which is Rural Access Mobility  Project  and the Account was domiciled with the 1st Bank plc Amakohia or Orlu Road branch which I was a signatory to but what actually attracted the protect was the IRROMA equipment Ohakim  bought which later served as part of the state contributions how when Rochas took over the administration of the state all those equipment disappeared Rochas started using one  Mazi Udensi to renegotiate with the world  bank  and that account with 1st Bank was drawn dawn initially  Rochas thought the World Bank would just hand him over the 60m dollars which is what the intended to contribute  that's when the take off of the project got delayed andre negotiation started  so mysay the truth and be save" 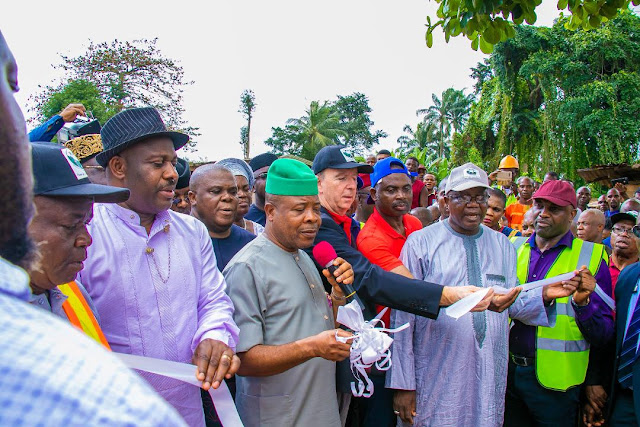 Onwuasoanya FCC Jones perfectly captured it when he said:
"For those who ask questions about why the projects took time in taking off, the best response is to educate them that international development agencies are very thorough and would do anything to ensure that the planning is properly done to avert a failure of the main project. Also, these agencies understand that public infrastructural projects are not done for political purposes, but for developmental and humanistic purposes. They didn't need to impress anyone, but have to do the due diligence to ensure that the projects last the test of time and serve the purpose for which it was designed.
World Bank funds are almost impossible to be diverted, because they are tied to projects, and these projects must be supervised by their officials. They don't just drop the money and allow you to disburse them however you want. They follow the project funding and execution, every step of the way, hence, it is usually difficult for the usual practice of diverting funds meant for such projects by unscrupulous politicians and public officials.
It is however, a win-win situation for Imolites. This is one project that shouldn't be politicized for any reason, as it is going to benefit almost every Imolite, no matter their political persuasions. At over 380 kilometers of rural roads, each LGA in the State should be expecting nothing less than 12 kilometers of brand new road, constructed or rehabilitated."
I, therefore thank Governor Emeka Ihedioha for taking the bold step in the implementation process, Ex-Governor Ikedi Ohakim for initiating, applying and paying the money needed to kick start the process and Ex-Governor Rochas Okorocha for ensuring the realization of the RAMP-2 PROJECT.
In all, Ndi-Imo will be the final beneficiary in this phase one of 13.5bn, phase 2 and possible another support from the international partners if they are impressed with the first phase.