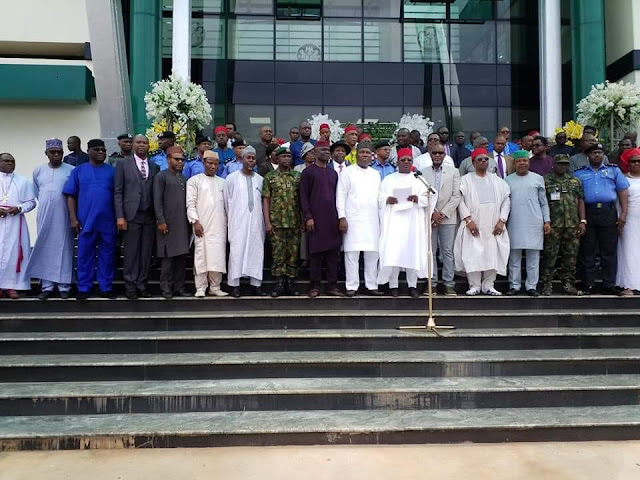 …As Aviation Minister assures standard reconstruction of Enugu Airport
Governors of South East geo-political zone, on Saturday, rose from an expanded meeting with the Minister of Aviation, Senator Hadi Sirika, representative of the Minister of Works, heads of security agencies at the national, zonal and state levels, Managing Director of FAAN, the President General of the Ohanaeze Ndigbo, Chief Nnia Nwodo, Prof Barth Nnaji,  among others and resolved to commence a joint air operation to flush out bandits from all forests in the zone, "and to make it a continuous one".
The governor also restricted inter-state movements of herdsmen and their cattle as well as foot movement of cattle and herdsmen from communities to communities across farmlands in the zone.
In a communiqué issued at the end of the meeting which was attended by Governors Ifeanyi Ugwuanyi of Enugu State, David Umahi of Ebonyi State/Chairman of the Forum, Willie Obiano of Anambra State, Emeka Ihedioha of Imo State and Deputy Governor of Abia State, Rt. Hon. Ude Oko Chukwu, the forum commended Gov. Ugwuanyi for being the first to commence the operation of Forest Guards in the South East and encouraged the remaining states to launch theirs.
The governors “banned herdsmen who move about with AK-47 guns and cutlasses” and asked security agencies in their various states to ensure the implementation.
On Operations Python Dance, the South East Governors Forum, through its Chairman, Gov. Umahi, who read the communiqué said they “never invited the Army nor were South East Governors informed of their Operations Python Dance until the operations were already started in the states".
The governor agreed to write President Muhammadu Buhari for a meeting with him and all the Service Chiefs on security to douse tension in the region.
On the closure of the Akanu Ibiam International Airport, Enugu, the governors disclosed that the Minister of Aviation assured them in the meeting that the airport would be reconstructed to meet the Abuja International Airport standard, adding that the runway repairs and other renovation works will be completed by December this year.
The governor further disclosed “the Sam Mbakwe Airport in Owerri, will be given face-lift to accommodate flights that would be diverted from Enugu Airport to Owerri Airport”.
While acknowledging the safety reasons given by the aviation minister for the closure of Enugu airport, the governors stated that “we support him for closing the Akanu Ibiam International Airport, Enugu to save the lives of our people and our visitors”.
They therefore agreed that “palliative and security measures to be worked out between FAAN, Ministry of Aviation, South East State Governors, Security Agencies and FMoW to ease out inconveniences and make the routes safe through a joint committee”.
“South East Governors and security agencies to patrol all routes leading to where flights will be diverted from Enugu and also provide escorts to all travelers to the airports,” the communiqué added.
Consequently, the governors constituted two committees to interface with Ministry of Aviation, FAAN, Security Agencies and Federal Ministry of Works, while Maj. Gen. Abel Obi Umahi (Rtd.), Capt. Awa Agwu (Rtd.), IGP Ogbonna Onovo (Rtd), CP Ikechukwu Aduba (Rtd.) and Mr. Raymond Nkemdirim, were inaugurated as chairman and members of the joint security committee, respectively, to be located in Enugu State.