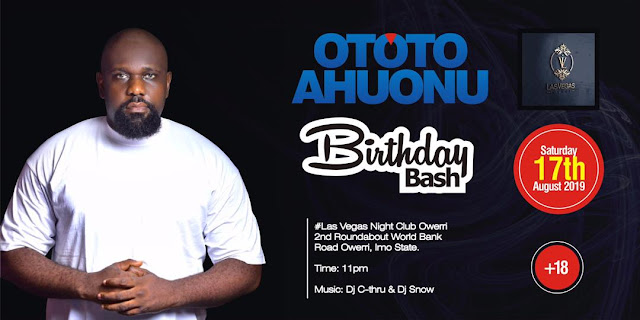 On Saturday August 17th, 2019, Nigerians from all walks of life will congregate at Las Vegas Night Club, situated at Titanic View Hotel Owerri, by 10pm to most respectfully celebrate an iconic show-promoter and celebrity bar-man, Mr Benjamin Okechukwu Nwokorie popularly known as OTOTO Ahuonu in the showbiz and entertainment industry across the country.
OTOTO Ahuonu started his showbiz as a Night Club head of security in old NV Night Club at All Seasons Hotel Owerri, he later got a job in the Nation's federal capital territory Abuja with Kryxtal Champagne Lounge and doubled as head of Club security as well as P.R.O. Ahuonu worked excellently that his former boss Myke Ikoku, the CEO All Seasons Hotel Owerri brought him back to Owerri to manage his Ultra Modern Bush Bar called MIMI PLACE and his rebranded night club called NV Lounge Owerri. OTOTO as fondly called handled it perfectly well to the admiration of fun seekers.
His work ethics attracted the management of  Orange Room Club/Lounge who engaged him as a floor manager. Ahuonu distinguished himself to the envy of club owners, no wonder on the opening of Las Vegas Night Club and Lounge, the Chief Executive, Chief Ifeanyi Opara sought the hand of OTOTO AHUONU as the manager of Las Vegas Lounge & Night Club, a business he took from scratch and today it is a force to reckon with in night club business throughout the country.
OTOTO AHUONU is a pioneer practitioner and a big player in the entertainment, event and hospitality industry of Owerri and beyond. In an interview with IfeanyiCy Blog, he make bold to say "I am one of the people that has put Owerri in the world map as the entertainment and hospitality hub of Africa and beyond, today Owerri is the first port of Call of seekers of quality entertainment and hospitality in nigeria."
OTOTO outside club business is a happy family man, he is married to Mrs Jovita Chisara Nwokorie from Late Celestine Uchegbu’s compound in Umuaghara Ogbe in Ahiazu Mbaise LGA Imo State and the union is blessed with three children; two boys and a girl.
Aside showbiz, OTOTO is a politician, he ran for councilorship position of GRA ward Owerri in 2010 under the platform of PPA, an election that was supposed to take place in 2006 November, and in 2015 Mr Okechukwu Nwokorie ran for House of Assembly in Ehime Mbano LGA and in 2019 general election he was the flag bearer of  Action Alliance (AA) for a seat in the Federal House of Representatives, seeking to represent Ehime Mbano/Obowo/Ihitte Uboma federal constituency before he withdrew on personal grounds.
Back to business, OTOTO is into hospitality and entertainment consultancy. His company-
Accolades Consult is a hospitality and entertainment consultancy firm based in Owerri, Imo State, South East Nigeria.
Accolades is made up of seasoned veterans in the industry with several years of experience in numerous sectors of the industry. OTOTO said
"We bring to bear extensive and valuable contacts and relationships as well as tremendous goodwill.
We consult at all levels of the business from set-up, take-off, running and  winding down."
He has equally moved into football and player management. He run a football Academy and Football club named Good Soccer Academy. The Academy is a football outfit based in Owerri Imo State that is poised in harnessing young soccer talents and bringing to the limelight in football. Ahuonu said "we seek to de-radicalize young people through football."