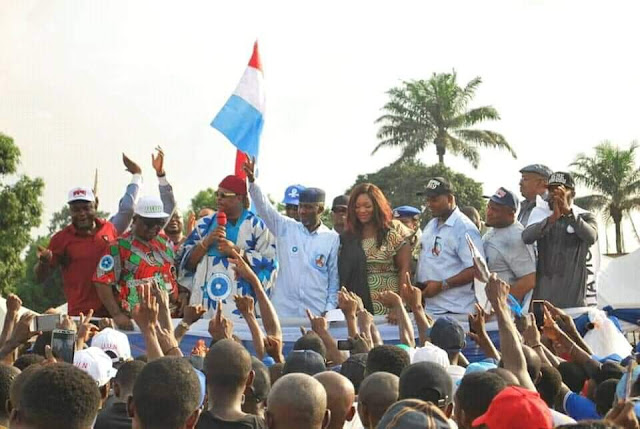 The 2019 Imo Governorship Candidate of the Action Alliance, AA, Ugwumba Uche Nwosu has directed his lawyers to appeal, the Federal High Court ruling nullifying his candidature for the 2019 Imo gubernatorial election over what the planttif referred to as double registerion.

The Federal High Court sitting in Abuja and presided over by Justice Ekwo In suit no: FHC/ABJ/CS/235/2019 BETWEEN ACTION PEOPLE'S PARTY AND ANOR. VS. INEC AND 2ORS, had awhile ago nailed the aspiration of Uche Nwosu of  becoming the Governor of Imo State for being nominated by APC and AA on 5th and 6th of Oct 2018 which amounts to multiple/double nomination and therefore offends the provisions of section 87 of the electoral act 2010 as amended.

In a suit filed by the National Chairman of the Action Peoples Party, APP, seeking judicial interpretation on the clear violation of relevant sections of the Nigeria constitution and electoral act, honourable Justice Ekwo voided the candidature of ex-governor Rocha Okorocha's Son-in-law, Uche Nwosu.

Read the press statement below:

"Earlier today, some paid hands of the Ihedioha administration, went wild in excitement over reports that a Federal High Court sitting in Abuja has nullified the candidature of His Excellency Ugwumba Uche Nwosu, as the governorship candidate of the Action Alliance (AA), in the March 9th, 2019, governorship election in Imo State. Following inquiries from anxious supporters of our youthful candidate and disheartened non-partisans who fear that their only hope of being rescued from the outrageous mal-governance happening in Imo State, may have been affected by this judgement, we wish to stay as follows:

1. But for the desperation of a known usurper to prolong his illegal stay in the Imo State Government House, there would not have been any further attempt to disturb and possibly discredit the judiciary with such frivolous petitions, as the Supreme Court, being the highest court in the land, had already rested every matter concerning the candidacy of His Excellency Ugwumba Uche Nwosu, and affirmed him duly nominated.

3. That the only Party whose candidate he was and still is, for the 2019 general elections, is the Action Alliance (AA). Therefore, the issue of double nomination does not arise.

4. That the National Chairman of the Action People's Party lacks the locus to institute this matter in the first place, and that the issue under review is already statute barred, as it was filed outside the 14 days stipulated by Section 285(9) of the Constitution of the Federal Republic of Nigeria (As Amended).

5. That the honorable Justice Inyang Ekwo was misled by the plaintiff to enter this erroneous judgement, and His Excellency Ugwumba Uche Nwosu has instructed his lawyers to immediately proceed on Appeal.

6. That while the recorded plaintiff in this matter is a certain Michael Ikeagwuonu, alias, Ikenga Imo Ugochinyere, we know that the real plaintiff is sitting cool on Imo funds with which he goes on many wild goose chases in a desperate, but ridiculous attempt to prolong the illegality of his present position, and if possible, override clear-cut Constitutional requirements.

7. That we further request the pro tem governor of Imo State, His Excellency Rt Hon Emeka Ihedioha to desist from squandering Imo's funds in attempts to obtain easy escape from the hovering Constitutional hammer, and rather deploy the huge sum of money, available to him, to tackle issues of governance.

Finally, we encourage our teeming supporters and all Imolites to remain unshaken in their faith for a working government, led by the man they overwhelmingly voted for in the last election, His Excellency Ugwumba Uche Nwosu, as their desire may be delayed, but never denied.