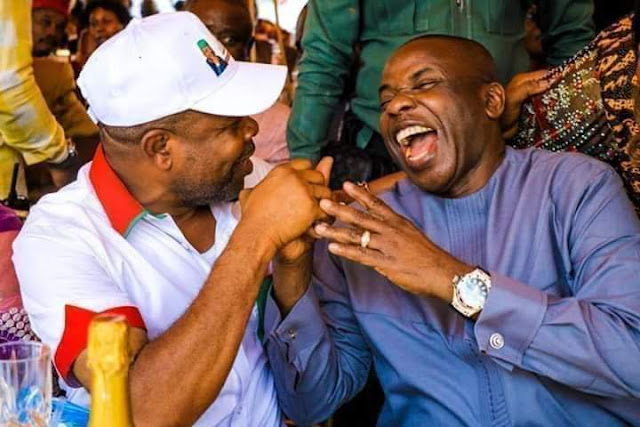 Apart from the comatose state the failed immediate former governor Rochas Okorocha left the state in, another challenge that the Gov. Ihedioha led RebuildImo government will face will be the scourge of FAKE news as the disgraced family government of Okorocha has sworn to deal with the new government with FALSEHOODS, OUTRIGHT MISREPRESENTATION OF GOVERNMENT POLICIES  AND CONTINUOUS SPREAD OF FAKENEWS with many recruited social media groups on hand to do the hatchet jobs but the bad news for them is that people like us as self appointed ambassadors of anti FAKE news will always be handy to correct wrong interpretations of the government policies with the right and gazetted information.

Earlier in the day, the governor announced the appointment of some prominent Imolites into an implementation committee that will herald the instrumentalities of the state to achieving the mark of the cleanest state in the country.

With this committee: they will plan, sensitize and Implement out a workable modal framework which will set in motion to propeling the state to the pedestals as the most environmentally friendly and cleanest state of the federation using this month of July as a pilot start.

This committee is a high powered team; having our former governor H. E Dr. Ikedi Ohakim as the chairman, the commander of the 34 artillery brigade Obinze as the Deputy chairman. Also it has the commissioner of police as a member as well as many other prominent persons and prominent organisations.

This committee, of course, is not expected to work in perpetuity meaning that they will have a time frame to work and hand over to the body which their policy framework must have set up.

Our governor is an administrator per excellence and he sure knows where and how to deploy professionalism and people to achieve results.

People like the former governor are great assets to the state whom their knowledge and wealth of experiences shall always be explored to help reposition and rebuild the state.

Some few uninformed persons are mischievously asserting that the former governor is accepting an appointment as "sanitary prefect", some say "dirty chairman" and other mischief induced comments.

It is a thing is shame to good sense that the psyche of some people have been so destroyed that doing the right things procedurally now portends to a thing of joke to them because they have been used to executive rascality. But then, you wouldn't really  blame a people who were subjected to an uninterrupted  8 year reign of executive impunity, lack of due process and iberiberism system elevated to a state policy. Shame!

Dr. Ikedi Ohakim is coming to serve as a father figure and a special consultant to the governor in areas of his professional specialism as one of the state governors who won laurels (back to back awards of excellence) in areas of environment and sanitation when they held sway... And there is no single doubt in my mind that His Excellency our dear former governor will deploy the strategies he used at the time now to make Imo clean and stay green again.

It is a common saying that no sane mind changes a winning formula else you will be on the part of failure.

So who wouldn't tap into that model? Who wouldn't key into the mechanism that kept our state as the cleanest state in Nigeria for three consecutive years?

Gov. Emeka Ihedioha was very sincere when he promised to return our state to its lost glorious years as environmentally friendly and cleanest state and he just made an emphatic step at actualisation by making the man who drove that team to replicate what he did In Imo those years of glory.

Some have also ignorantly asserted why must it be Ohakim? Haven't he trained people he could have nominated?

Setting the records straight: His Excellency our dear former governor is not coming to usurp the place of his mentees, rather, he is coming to set the ball rolling for them and set up the pace for their smooth transition by setting up the modal machineries and pilot scheme.
Posted by IfeanyiCy Njoku
Labels: Opinion