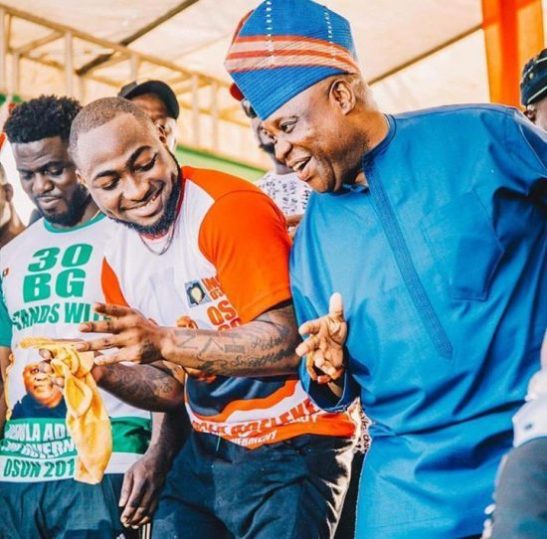 Supreme Court may have shattered the hope of Nigeria’s Afro-pop star David Adeleke popularly known as Davido over the Osun governorship election dispute.
The apex court had affirmed Adegboyega Oyetola as the duly elected governor of Osun State, leaving Davido’s uncle Senator Ademola Adeleke in the cold.
On 3 July, Davido in three retweets hoped that victory would swing to his uncle’s way.
In a reply to a tweet by @fholarwealth on Wednesdsay, that he had a dream that the Supreme Court ruled in favour of Senator Ademola Adeleke, Davido stated: ”This dream shall pass in the mighty name of Jesus”.
Davido was also bubbling with hope when he retweeted his uncle’s “All I see is Victory…”, tweet on same 3 July. “Yes unc!!!!! It’s boutta be LITT!!!”, he replied.
In another retweet of an Atiku and PDP loyalist, who wrote: FRIDAY!! SUPREME COURT JUDGEMENT!! ADELEKE TÍ DE!”, Davido gleefully added: ‘Gonna be a great day By Grace of God!”
And a bad day it turned as the Supreme Court has left the 26 year-old popular singer literally shattered.
The 26 year-old musician, born as David Adedeji Adeleke had made Osun governorship election a main project. He sang at the rallies of his uncle in the run-up to the 22 September governorship election in Osun state. He used Twitter, Instagram to mobilise support for him. He was understandably Senator Adeleke’s biggest cheerleader.
Davido got entangled with the election in the state with reports that his account and dad’s own were frozen by EFCC. This was quickly debunked by the EFCC as fake news.
Then after the first poll on 22 September, with the race heading for the wire, Davido challenged INEC over the results of Oshogbo local government, the last council result being expected to know the winner.
“We have the original results for Oshogbo ! @inecnigeria don’t try shit !!,” the singer screamed in a tweet.
But alas, there was no such alteration done by INEC, as the election was declared inconclusive. INEC ordered a rerun in some polling units. 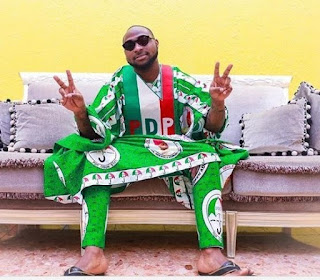 Davido went ballistic in a tweet: “No re run !! Announce winner now @inecnigeria !! Stop waiting on that call! It won’t come! @IsiakaAdeleke1! THE WORLD IS WATCHING”.
A day to the rerun election, Davido posted an understandably partisan message, rallying voters for his uncle and at the same time, hitting the Big Man in Lagos:
He wrote: “To all patriotic Osun citizens on the way to Osun decides, I salute you for the ‘mileage’ you have covered thus far during this election.
“I salute your support and resilience for Senator Ademola Adeleke, the soon to be the cheerful and Dancing Governor.
“I salute your ability to vote and deal with poor governance and the incumbent administration.
“It should be noted that Osun State is not an annexe of Lagos but a state of its own and as such, all sorts of sugar-coated political suzerainty should be rejected, expunged and decimated.
“Don’t be sugar-coated by their blatant promises. As you cast your vote tomorrow for the rerun, vote for PDP.”
When Ademola Adeleke lost in the rerun, wounded Davido was stupefied and kept quiet for some days. But thereafter, after getting healed of his emotions, he wrote: ‘God knows best ! Best believe he will come thru soon.’ And at a Felabration concert, he actually turned himself into INEC by calling his uncle the authentic governor of Osun State.
“I want to give a shout out to His Excellency, Governor Nurudeen Ademola Adeleke, the Governor of Osun State”, he said on stage.
The ‘best’ for Davido finally came in March after the election tribunal ruled in Ademola Adeleke’s favour.
“God no dey sleep!!! Mandate returned!!! Imole ti de!! Osun I’m on my way!!”, Davido wrote on Instagram.
And on his Twitter handle, he shared a photo from the 2018 campaign trail, and tweeted, “Imole ti de!!!!!! Congratulations to the great people of Osun State!”.
It was not over until it’s over. Oyetola and his party took their case to the Appeal court in Abuja. The court in a split decision of 4-1 ruled in Oyetola’s favour.
Davido reacted in a long post on Instagram: “My people, we cannot hide our disappointment. This judgment of the Court of the Appeal. It hurts, it’s extremely painful, but guess what? It is not the end. Far from it.
“Everyone, remain calm. I want to urge all our supporters to remain calm at this time. As you all know, there is one last and important lap.
“It is time for the last lap and the God I know and serve is in control.
“We have won the first leg. We have lost the second leg but I am certain that the highest court in the land will rectify and restore all that has been stolen from us with this judgment.
“Everyone stay calm and stay safe! See you at the Supreme court,” he wrote.
Today, Davido’s hope was dashed as the Supreme Court resolved the dispute in Oyetola’s favour, in all finality.
Davido was on tour of Amsterdam, Australia, China when the shattering judgment was read.
But on 3 July he had expressed hope that his uncle would carry the day, when he retweeted his uncle’s “All I see is Victory…”, tweet on 3 July. “Yes unc!!!!! It’s boutta be LITT!!!”, he replied.
The same day, he had also retweeted two tweet, one of them by @ fholarwealth, who had tagged him about a dream he had.
@fholarwealth wrote: I had a dream last night that Supreme Court have ruled the Osun election petition in favour of @IsiakaAdeleke1. Come July 5 we celebrate by Gods grace”.
Davido said in his retweet: This dream shall pass in the mighty name of Jesus!!.
In another retweet of an Atiku and PDP loyalist, who wrote: FRIDAY!! SUPREME COURT JUDGEMENT!! ADELEKE TÍ DE!”, Davido gleefully added: ‘Gonna be a great day By Grace of God!”
Posted by IfeanyiCy Njoku
Labels: Celebrity gist, Politics