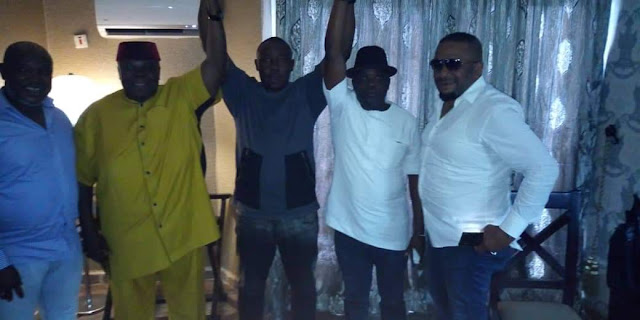 After months of political battles, PDP candidate in Isiala Mbano LGA in the 2019 election, Chukwuka Agwunobi, popularly known as Sir Duke, has embraced his elder brother, Chiji Collins, who is the speaker of the Imo state House of Assembly.

The peace meeting which was brokered by prominent sons and daughters of the state is the beginning to the end of the litigation filed by SIR DUKE challenging the reelection of Chiji.

SIR DUKE had informed the tribunal that he was already settling with his brother out of the court .

The speaker had defeated other candidates to emerge the reelected member for Isiala Mbano state constituency during the last election.
Posted by IfeanyiCy Njoku
Labels: Politics