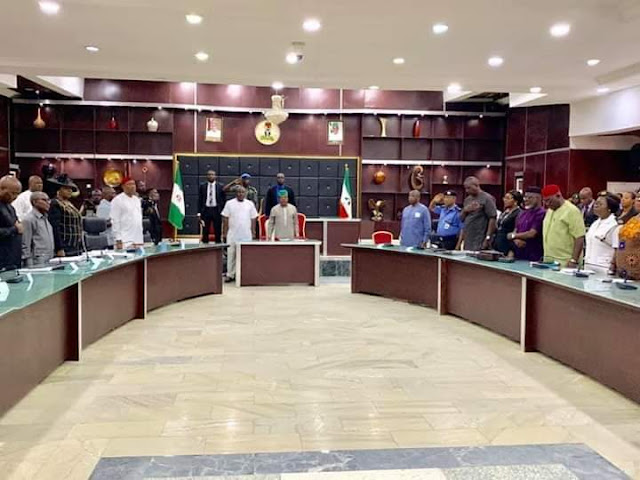 Recall that Governor Emeka Ihedioha had on Monday, July 15, 2019, announced the reinstitution of the monthly cleanup exercise and the Monthly Cleanup Governor's Prize.

The Governor named Ohakim as the Chairman of the Committee to plan, sensitize and implement the July 2019 cleanup exercise and its prizes.

In a press release made available to the press in Owerri on Tuesday, Ohakim noted that though the Committee is an adhoc committee, he accepted it and would give his best, stressing that "Service doesn't have to be big and grandiose to make a difference".

Ohakim said that as an environmentalist, his core interest has always been to have a healthy and clean environment where human beings can live healthy lives and do their legitimate businesses.

He recalled that "For his love for a clean and healthy environment he created the Clean and Green Initiative, the Imo State Environmental Transformation Commission (ENTRACO) and the Imo Roads Maintenance Agency (IROMA) while he was Governor between 2007 and 2011. In April 2019 he was recognized with Fellowship Award by the Nigerian Society for Landscape Architects, a Fellowship Award by the International Society of Landscape Architects, among numerous other numerous awards in recognition of his love for the environment.

"Ohakim is the President and Founder of Clean and Green Africa Foundation. He is passionate about the environment and would avail the state his knowledge and services to achieve a clean and healthy environment".

The former Governor called on other members of the Committee to put in their best towards the achievement of their set targets. He also called on the youths of Imo State to support the Ihedioha administration by volunteering towards achieving a clean and healthy environment for all.

He further assured that "if we join hands together we will have a better and healthy Imo State", even as he thanked Governor Emeka Ihedioha for taking the bull by the horn in all his appointments and pronouncements since becoming Governor on May 29, 2019.
Posted by IfeanyiCy Njoku
Labels: News