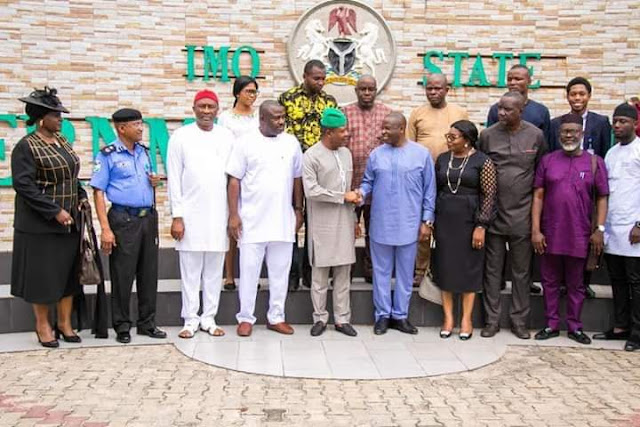 Imo State governor, His Excellency Rt. Hon Emeka Ihedioha, has stated the determination of his administration to make the state the cleanest in the federation.

The governor who spoke at the government house, Owerri, on Wednesday, during the inauguration of the Planning, Sensitization and Implementation Committee for the July, 2019 clean-up exercise, said the health of the state's citizens was threatened by unhealthy environment.

He said that between 2008 and 2011, the state was adjudged the cleanest in the country by the federal ministry of environment.

He decried that in the last 8 years, the state had become one of the dirtiest.

Gov. Ihedioha thanked the committee headed by former governor, Chief Ikedi Ohakim, for accepting the responsibility and expressed confidence that the former Imo Chief Executive will lead the committee "in style".

"I thank all of you for accepting to render this voluntary service to our state. When the chairman of this committee was governor between 2007 and 2011, our state won accolades as the cleanest in Nigeria in 2009, 2010 and 2011. For this, I consider him best suited for this responsibility", he said.

"I have no doubt that he will lead this committee in style. Imo will soon leapfrog other states and reach the top".

The governor also announced that he has instituted monthly prices for the cleanest local government and autonomous community in the state.

The committee was charged with sourcing sponsorships and partnerships with Banks, Hotels, Construction companies, Telecom companies, Transporters and other businesses.

It will also organize volunteers, create and manage brand materials, publicity and media; organize and manage the evacuation of refuse and dump sites; enforce total compliance; recommend and organize Governor’s Prize;  Audit and handover for the August committee.