Menu
Home » Politics » Imo North: Uwajumogu will not intimidate us to give him certificate of return —INEC

Imo North: Uwajumogu will not intimidate us to give him certificate of return —INEC 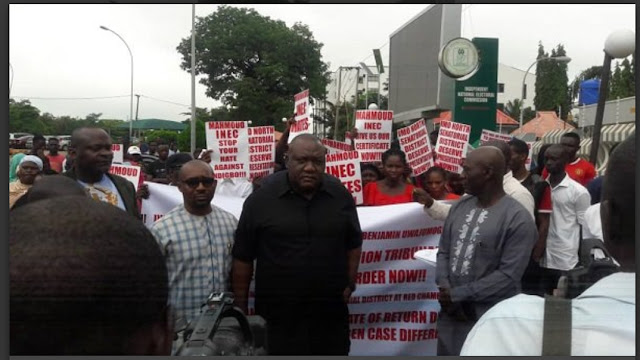 The Independent National Electoral Commission has said that it would not be stampeded into issuing a certificate of return to the senatorial candidate of the All Progressives Congress for Imo North in the last general elections, Senator Benjamin Uwajumogu.

The Commission said this in a statement issued by the National Commissioner in charge of Information and Voter Education, Mr. Festus Okoye, and made available to newsmen on Tuesday in Abuja.

Uwajumogu had, on Monday, led a protest to the INEC headquarters demanding that a certificate of return be issued to him based on the order of an Abuja Federal High Court.


Okoye said though INEC had been served with the court judgment on July 16, it had yet to take a decision on the matter.

“The said judgement could not undergo the regular processes and procedures of the Commission; and must wait for the next Commission’s meeting.

“The Commission will not be stampeded into taking precipitate action or decision that may be detrimental to the electoral process and procedures,” Okoye said.


He said INEC was committed to the rule of law and the enthronement of clean electoral process in the discharge of its duty, saying, “the Commission will not waiver, be blackmailed or intimidated.”’

“The Commission is therefore interested in obeying the courts and this has nothing to do with the political affiliation of the candidates or the aggrieved parties.”

He said the Commission was interested in the rule of law and due process, adding that INEC did not make a distinction between orders made in its favour and orders made against it.


He disclosed that all court orders are subjected to the processes and procedures of the Commission to prevent giving in to fraudulent court orders or giving wrong interpretation to orders of court.

“We have instances where the Commission declared as unenforceable court orders that required it to issue certificates of return in respect of constituencies and senatorial districts not known to the law and the Constitution.”