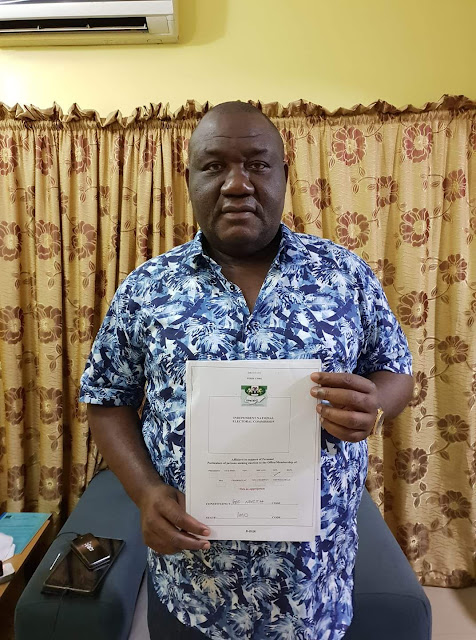 The Independent National Electoral Commission (INEC) has been served an order of the Federal High Court sitting in Abuja directing it to immediately issue a certificate of return to  as the duly elected senator for Imo West Senatorial district.

The Commission had withheld the certificate of the APC senator on the ground that he was not validly elected because the electoral process was marred by irregularities.
Senator Uwajumogu had approached the court seeking for an order to compel INEC to issue him Certificate of Return having been announced as winner of the Senatorial election by the Returning Officer.
In its judgement delivered on July 4th, 2019, Presiding Justice Taiwo Taiwo ordered the commission to issue Uwajumogu his certificate.
In the order, the court ruled “that the Independent National Electoral Commission does not have the power and right under any law in Nigeria to review or otherwise deal with any question related or connected to the declaration and return of the applicant for the Imo North Senatorial District election on the 23rd of February and 9th March 2019 after the returning officer had taken a decision”.
The court among others also ruled “that an order of mandatory injunction is hereby made compelling the Independent National Electoral Commission to immediately issue the applicant Senator Benjamin Uwajumogu a sealed Certificate of Return for the Imo North Senatorial District”.
Reacting to the judgement, Senator Uwajumogu expressed satisfaction that justice had been served but regretted that he had to miss being inaugurated alongside his colleagues owing to the legal impediments.
“I am highly elated with the declarative order compelling INEC to issue me Certificate of Return. I give glory to God. However, i would expect INEC to swiftly comply with the order without wasting time to save me more precious time being wasted in serving the good people of Imo North in the Red Chambers. Already, INEC,s decision to hold on to my Certificate of Return after the Returning Officer had announced me as winner had caused me incalculable damage but that can be remedied to a large extent if i am issued my Certificate”
Posted by IfeanyiCy Njoku
Labels: News