Highest paid CEOs in Nigeria earn N5.4bn as salaries in 2018 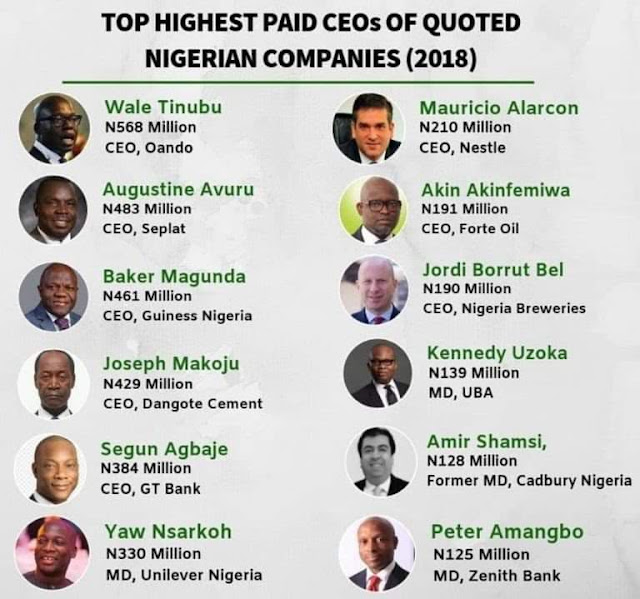 Uneasy lies the head that wears the crown and so does the compensation that goes with it. The Chief Executive Officers (CEOs) of some of the largest publicly quoted companies on the Nigerian Stock Exchange (NSE) earned a whopping N5.459 billion in 2018, a 26.4% rise from the N4.317 billion earned in 2017.

These companies, 20 in number, span across the various sectors of the Nigerian economy from banking to oil and gas, cement, food & beverage, brewery, and telecoms.

The NSE has about 169 quoted companies with a market capitalization of about N13.69 trillion. These companies make up over 60% of the total recapitalization in the stock exchange.

Highest Earner:  MTN’s Fredy Moolman topped the chart with a total executive compensation (comps) of N571 million for the year ended December 2018. His salary is up by a whopping 89.1% from the N302 million earned in 2017. Moolman took over as MTN chief in 2015 following the devastating $1 billion fine imposed on the telecommunication giants for SIM card infractions by the Nigerian government.

Soon after his appointment in 2015 MTN recorded its first loss in over 20 years, posting a $108 million loss in 2016. Since then, the company has returned to profitability, posting an astonishing N98 billion in half-year profits for MTN Nigerian alone this year. The company also concluded payment of the fines this year.

Under the guidance of Moolman, MTN also survived several challenges in the last four years, particularly the crisis with the Central Bank of Nigeria (CBN) and Ministry of Justice over the $8.1 billion dividend repatriation.

The successful listing of MTN on the Nigerian Stock Exchange

In the spotlight: There is no gainsaying that the erudite Oando Group CEO, Wale Tinubu, is one of the most controversial CEOs on the Nigerian corporate scene. JAT, as he is popularly called earned a whopping N568 million in 2018, a 67% increase from the N340 million he earned a year earlier.  Tinubu is now the highest-earning indigenous CEO among NSE quoted companies.

In terms of profitability, Oando group’s profits had increased by 113.8% from N13.4 billion in 2017 to N28.7 billion in 2018. Despite this impressive turnaround in the company’s fortunes, he remains in the spotlight over his current tussle with Security and Exchange Commission (SEC) which had asked him to resign as the firm CEO.

Although Oando has failed to live up to expectations of stakeholders in the oil and gas industry who had expected the company to transform into a dominant player in both the upstream and downstream sectors of the industry, Tinubu deserves credit for helping the company to avoid an imminent bankruptcy in the wake of the 2014  global oil price crash. Shareholders of Oando are still reeling from a massive loss of market value following the crash and will have to manage a couple of more years without dividend payment.

Oversaw the negotiations of restructuring of loans of over N250 billion.

Successfully spun off key operating assets raising cash to pay down some debts
Restructured the company and allowing smaller entities to function as profit centers.

Least Earner: Surprisingly, one of the richest men in Nigeria and one of the only CEOs and co-founders of a major corporation in Nigeria is the least earner on our list.

Despite the flat growth in his personal compensations, Wigwe helped the bank grow its profits from N53.6 billion to N94.9 billion in 2018, representing a 77% growth.

Led the bank through the recession and keep it profitable over the years.

Foreign Legion: Nigeria’s corporate landscape is largely led by foreigners who are brought in for their experience and expertise. They mostly dominate the consumer goods sector where their Nigerian counterparts have largely failed.

While MTN’s Moolman tops the list, he is closely followed by Guinness Nigeria CEO, Baker Magunda. Uganda- born Magunda earned a whopping N461 million in executive compensation in 2018, a 148% rise from the N186 million earned a year earlier.

Guinness has gone through a rough patch of late, raking in losses amidst stiff competition and change in taste of younger alcohol drinkers. However, he helped return the company to profitability in 2018.

Lafarge Wapco has had a tumultuous few years. Their share price has fallen from about N100 to under N10 earlier this year, lowest in about 5 years. However, since the spin-off of their loss-making South African Entity, they have had some respite. Nevertheless, Michel Puchercos, its CEO earned about N312 million up 21% from the year before.

Unilever’s Yaw Nsarkoh, a Ghanaian, earned N330 million in 2018 up by 50.3% when compared to the N220 million earned a year earlier. Unilever has struggled through the bad years of the recession but has since seen its profits rise to N9.1 billion in 2018.

Julius Berger has had it rough under President  Muhammadu Buhari but seems to have turned the corner. Last year it reported a profit of N6.1 billion up from N2.5 billion in 2017. The turnaround was led by Wolfgang Goetsch who retired in 2018. Dr. Lars Richter took over in October 2018. Between him and Wolfgang, the company incurred compensations of N319 million.

Nestle is one of the most profitable company in Nigeria and has been a consistent performer. Its Mexican CEO, Mauricio Alarcon, earned N210 million in 2018, up by 23.8% from N170 million the previous year.
Modest by most standards, especially if you consider how well run the company is.
Nestle profits rose 27.5% to N43 billion in 2018.

Dangote Cement is one of the most profitable companies in Nigeria and on the continent.

Engr. Joseph Makoju was made the substantive CEO in April 2019 after he was appointed to the role albeit in acting capacity in October 2018.
He earned N429 million as CEO during the year.