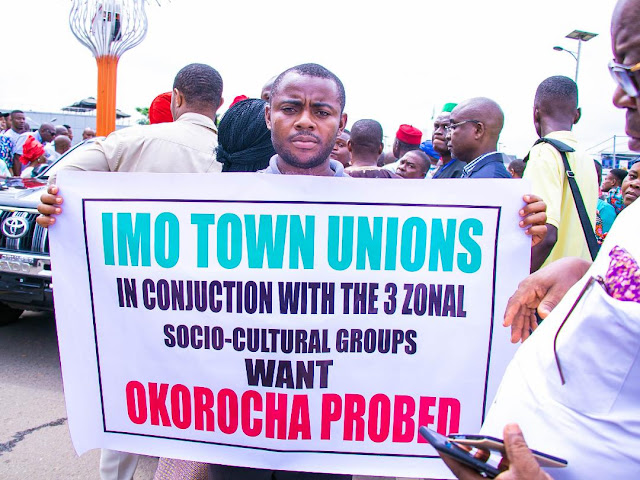 Owerri, the Imo State capital today witnessed massive protest as community leaders, women, youths, students, religious, disabled and civil society organisations all marched in the streets of Owerri and ended at government house in a peaceful demonstration demanding from the Governor of Imo State, Hon Emeka Ihedioha and government of Imo State to immediately start the process of recovering of Imo assets sold by the Okorocha’s administration and use all relevant state legal instruments and federal laws to probe former Governor Rochas Okorocha’s financial recklessness, assets conversion to private use, crime and unprecedented and unbridled plunder of Imo's common patrimony

The letter addressed to Imo State Governor and signed by ten (10) signatories captioned "DEMAND FOR URGENT PROBE AND RECOVERY OF IMO ASSETS FROM FORMER GOVERNOR ROCHAS OKOROCHA AND HIS ACCOMPLICES" reads :

"The Town Unions of the over six hundred Autonomous Communities and collaborating Apex Zonal Social Cultural Organization rising from the conviction that the eight years that Chief Rochas Okorocha held sway as Governor of Imo State were characterized by unprecedented and unbridled plunder of our common patrimony have come to demand justice. We are the leadership of the Association of Imo State Indigenous Town Unions (AISITU) in collaboration with Orluzurumee, Olu Owerri, Olu Okigwe, Amalgamation of Imo Professional Associations (AIPA), the students unions and the various youth groups in the State. We are concerned and indeed compelled to protest and make this demand on Governor Emeka Ihedioha to act because we represent the vast majority of the poor and defenceless citizens of Imo State at grassroots who suffer the greatest detriments of bad governance. 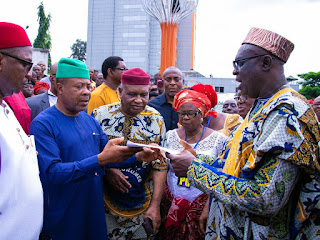 During the ruinous misrule of Okorocha, Imo went through a sort of untold financial hemorrhage, as resources were frittered away and public assets looted and converted to private use.
As if that was not enough, Chief Okorocha so cruelly plunged the State into irredeemable debt slavery to the tune of over N200 billion, a debt stock that will remain unpayable even by ten generations unborn.  Yet under the watch of Chief Okorocha, the bailout funds to Imo State inexplicably disappeared under the match of his son-in-law, Uche Nwosu, and he neither budged nor stirred. Worse still, allocations to the twenty-seven local government areas of the State were hijacked and looted, and the system stifled and made moribund. On this note, we wish to inform the Governor, Rt. Hon. Emeka Ihedioha, that we deeply appreciate his innovative approach to the Imo Local Government system which now makes the Local Government Areas of the State have their complete monthly allocations.
Staggering sums were voted for the construction of supposed general hospitals which never saw the light of the day. Revenue-spinning investments of the State, notably the Concorde Hotels and Adapalm etc., were sold off to unknown investors and at unknown rates. The Internally Generated Revenues (IGR) of the State were literally handed out to family and friends and on a monthly basis nearly one billion Naira disappeared through that channel, even the civil servants got their salaries slashed by thirty to forty percent. Imo pensioners, men and women who expended their youthfulness, their brains and their brawns in service of our State, were left unpaid for nearly sixty months and they died in their tens on a daily basis. These senior citizens were subjected to the most excruciating torture by Okorocha so much so that even their three successive chairmen died in quick succession holding dud cheques in their hands. These pensioners are still dying till date. Indeed, Imo had a Governor that was any other creature other than human beings. We therefore call on Governor Ihedioha to kindly intervene to save our pensioners from further deaths. 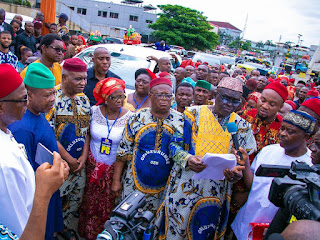 We are worried beyond words that till this moment not so much has been done by the Government of Rt. Hon. Emeka Ihedioha, pertaining to the general cries that all which were looted by Chief Rochas Okorocha should be recovered and reassigned to serve collective purposes. We enjoin the Governor to entrust this recovery process into the hands of persons of credibility and integrity so that the recovered assets do not go the way of the  recovered Abacha loots, which can only be heard but can never be seen.
In order to conceal his infamy, Chief Okorocha has proceeded to invest heavily in propaganda and has retained and recruited many willing tools to do the hatchet job. These hack writers now labour profusely to rewrite the narratives and stand history on its head. We are aware of the identities of those elements, and we wish to let them know that Imo people will stand up to them squarely.
We are aware also that there are some people who preach that let bygone be bygone, and that the incumbent Governor should forget everything that happened in the past. We wish to assert categorically that anyone who holds such opinion is equally a suspect in the plunder of Imo State. The insistence of Imo people is that everything stolen by the past administration must be recovered with mathematical precision. This must done in a civilized and legally permissible manner because that is what good governance is all about.
Our conviction is that if the current administration could achieve this recovery of Imo assets and probe and punish those found culpable, it would have gone halfway into sanitizing the system and engendering good governance. We want this to serve as a deterrent to other persons who hold public offices in Imo and to remind them that one day they shall also be made to face the music. Again, we are of the view that the proceeds from the recovery exercise will so greatly assist the State to meet up with its many pressing developmental challenges which the past administration had marginalized. 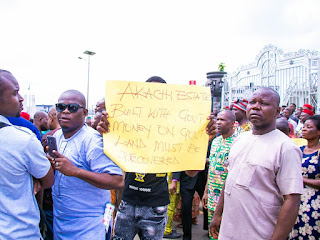 In specific terms, we call on Governor Emeka Ihedioha to quickly act and recover the following from Chief Okorocha and his accomplices:
1. The N21.6 billion taken from the local government system of the State by Okorocha.
2. The Eastern Palm University built with our money but personalized by Okorocha. This University was approved by the Nigerian Universities Commission, NUC, as the 42nd State University. Before the previous Governor sought and got approval for the said university, he had acquired land with government instruments and built all the houses at the University premises for the relocation of the Imo State University to his Community, Ogboko, where the University is situated today, a plot we resisted, prompting him to jettison the idea of relocation to apply for license from NUC. Today, the former Governor goes around saying that Imo State has ten percent equity in the Eastern Pam University while his Rochas Foundation has ninety percent. We demand that this State owned university be recovered without further delay.
3. The N96 billion being the stolen portion of Imo's IGR for eight years.
4. Over N40 billion looted through the failed 27 general hospital projects.
5. The Old IBC premises at Orji: Before now, everybody in Imo State knows that the Old Imo Broadcasting Corporation premises at Orji is a government land. The former Governor used his office as Governor to convert the asset to himself, after building gigantic blocks at the facility with government money. We request that this government property be recovered without further delay.
6. The Nekede and Orji Mechanic Villages:
We also wish to inform the public that the vast expanse of land occupied by the artisans and mechanics at the Nakede mechanic village as well as Orji Mechanic village was forcefully taken by the former Governor and given to his family members and cronies.
7. Also, vast expanse of land on the Sam Mbakwe Airport road was acquired by the Government for the purpose of attracting a Naval Base. To our dismay, over seventy percent of the said land was converted to a personal estate by the former Governor. We demand the recovery of these and other lands without further delay.
8. The Adapalm in Ohaji which Okorocha said was leased out to investors and left in ruins till date. 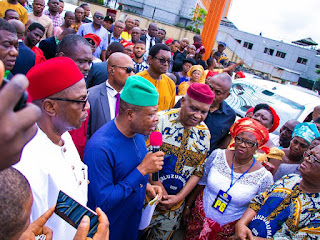 9. The Concorde Hotels, an enviable investment of the State which was acquired by Okorocha through some proxies.
10. Westbrook Hotels which is linked to Okorocha's son-in-law, Uche Nwosu.
11. WODDI Wellness Center owned by Okorocha's wife, Nkechi, built on the former Imo State Secretariat Annex, a land forcefully acquired from the State by Uche Nwosu as Commissioner for Lands.
12. The Reach FM owned by Uche Nwosu, without any know legitimate means of owning such huge property.
13. The multi billion Naira Farmers Market built by Geraldine, Okorocha's sister, on a land belonging to the State.
14. Over twenty-five plots State land acquired by Uche Nwosu upon which El Freeda Foundation was built. This is the Foundation through which billions of Naira have been laundered out of the State.
15. Extervia Mega Supermarket opposite Civic Center Estate owned by Ogechi Ololo, Okorocha's sister.
16. Municipal Plaza owned by Nkechi Okorocha built on a land forcefully acquired from a civil servant by Uche Nwosu.
17. Twitter Bites acquired by Geraldine Okorocha forcefully from Mr. Fans.
18. Spibat Estate most of which land was forcefully taken from Mbieri people by Okorocha.
19. House of Freeda Malls in Owerri, Abuja and Lagos built by Uloma, Uche Nwosu's wife.
20. A mighty poultry farm beside Shoprite owned by Uche Nwosu on a land forcefully acquired.
21. A probe into the JPROS financial sleaze perpetrated in Okorocha's first term.
22. Recovery of over N800 million given to Okorocha's sister, Geraldine per annum, for Christmas trees.
23. Recovery of the N600 million diverted through the supposed renovation of the Imo State Secretariat.
24. Recovery of the N18 billion looted through the alleged construction of primary school blocks across the State.
25. Recovery of all the markets in the State which Okorocha has claimed 30% ownership.
26. Recovery of the ISOPADEC funds and the 13% oil derivation funds which amount to over N20 billion.
27. Recovery of the cardboard industry at Owerri-Ebeiri in Orlu.
28. Recovery of the N2 billion diverted through the construction of the completely worthless Akachi Tower.
29. A probe into and recovery of over N120 billion diverted through failed road projects. There is no single road project done by Okorocha that is not a failure.
30. Recovery of hundreds of plots of land taken from the State by Okorocha and family, spread across the state.
31. Recovery of Imo's security votes which Okorocha personalized for eight years.
32. Recovery of the billions of Naira looted through the construction of deadly concrete beams on the roads and overhead iron projectiles, which serves no purpose while people are dying daily of hunger. These death traps should be dismantled.
33. Recovery of IRROMA equipment worth billions of Naira looted by Okorocha.
34. Recovery of ITC vehicles and investment looted by Okorocha, and many more loots!
35. High powered probe of all the billions wasted in the "supposed" infrastructural development of the new universities in the state, as none of the substandard buildings have been completed.
More startling reports and revelations are coming and as the do we continue to update your Excellency and the public.
We urge the Governor to swing into action and ensure that justice is done in Imo State.