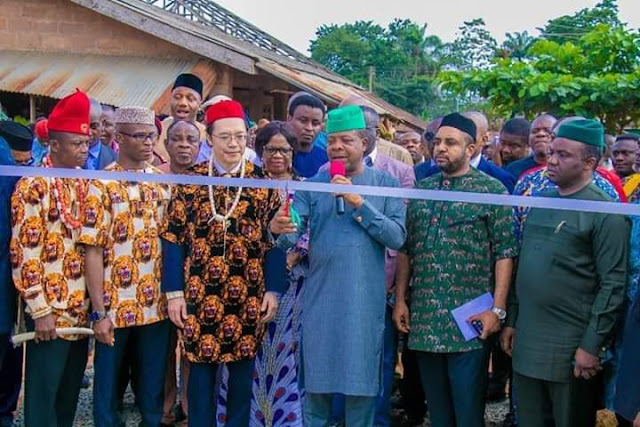 The governor of Imo state, Rt Hon Emeka Ihedioha, CON,  has inaugurated the installation of over 100 solar street lights at Ezeagbogu community in Ezinihitte Mbaise Local Government of Imo state.

The governor extolled the Japanese ambassador to Nigeria, His Exellency Yataka Kikuta, for partnering with Development Dynamics, a reputable NGO, to ensure that the project is completed for the use of the people.

The Governor urged the youths of the area and by extension, Imo State, to borrow a leaf from the program director of Development Dynamics Mr Jude Ohanele, who attracted the project to benefit his community. The governor noted that all hands must be on deck to ensure that the project is maintained for maximum impact.

On his path, the Japanese ambassador to Nigeria, Mr Kikuta, in his address said that the project will enhance the security of lives and contribute to sustainable community development.

His words, "from today, your community will have Japanese solar powered street lightings, which automatically turn-on at night and turn-off at day break. The lights last for 30 straight hours after an 8-hour charge.

"There is a renewed sense of safety and security in Ezeagbogu since the completion of this project, especially around Eke Ezeagbogu which is the center of economic activities in this community. This has increased the number of business hours available to the people here and influenced positively their struggle against hunger and poverty. It has also made the nights in Ezeagbogu safer, " Ohanele disclosed.

The Highpoint of the event was the conferment of a  Chieftaincy title of “Ezi Enyi Ndi Ezeagbogu” on the Japanese Ambassador by the Traditional Rulers of the Community.