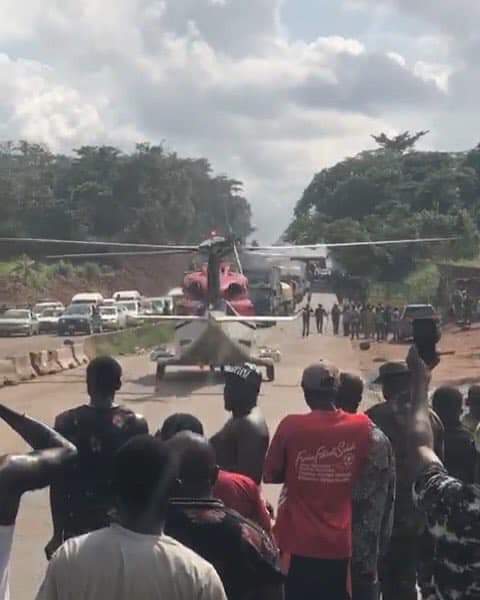 A man who was picked up by a helicopter in the middle of a huge traffic jam in Nigeria Benin Orie road had suffered a stroke, the helicopter company has told the BBC.

The video from Sunday spread widely on social media, with many speculating it showed a billionaire who had called the helicopter to escape the four-hour long traffic jam.

The video provoked condemnation about the behaviour of Nigeria's super rich.

But the helicopter operator says it is normal to respond to emergency calls.

The luxury brand Julian's Luxury appears to have been one of the first to spread the idea that the video showed a billionaire being rescued from a traffic jam.

"Real Luxury Lifestyle... the Power of Money... picking up a VIP who is stuck in traffic on the Lagos Benin Expressway," it said.

Another rumour that spread was that the helicopter was rescuing the girlfriend of a billionaire.

This theory was put forward by actor Deyemi Okanlawon who went on to condemn the act as "lawlessness".

Three days later, on Wednesday, Nigeria's Civil Aviation authority said that it had launched an investigation into the incident.

Femi Adeniji from Tropical Arctic Logistics Ltd told the BBC that he didn't understand why the video had caused such a fuss.

He said it was normal for their company to respond to emergency situations, as there is no such public emergency service available - and they had done so six times in the last two months.

He said that there was no truth in the speculation that the helicopter was called by a billionaire who wanted to escape the huge traffic jam.

Instead he said that the man had been suffering from high blood pressure and his driver had panicked.

A doctor who was also struck in the traffic was helping the man and the helicopter was called.

It landed on Ore road which connects the south west to the southern part of Nigeria.