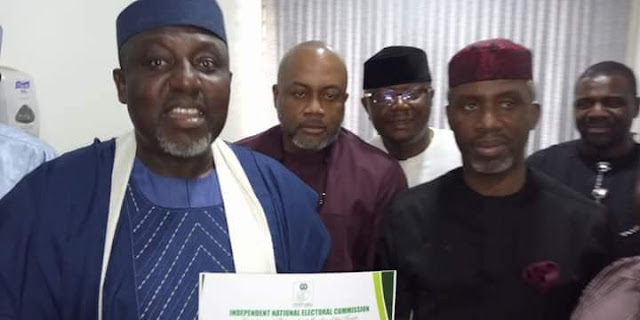 Chairman of the task force, Jasper Ndubuaku, while briefing newsmen in Owerri, noted that the forceful approach had become necessary following the refusal of most of the culprits to willingly submit the properties.
He said, “As I speak, the formr governor has about 60 vehicles including the outriders he was using when he was in government intact; his wife has about seven vehicles; his driver has a land cruiser jeep.”
Ndubuaku, however, disclosed that the governor and his wife and some of his aides were not making their jobs easier as they continually held on to them.

According to him, the task force would use the people aggrieved by the poor achievement of the past government to recover the vehicles.
“We would use the people to recover our property; most of them such as the mechanics have already indicated interest in working with us; by the time we move in with about 6,000 people, they wouldn’t have the choice than to submit them,” Ndubuaku said.
Ndubuaku also disclosed that seven vehicles were found in the premises of the former ADC to Senator Okorocha but added that one had been recovered so far.

He further disclosed that the 27 vehicles bought for the council chairmen during Okorocha’s tenure had been converted to school busses and missionary buses by those in whose care they formerly were.
“All the busses bought by the former governor for the 27 council chairmen in the state have been converted to school buses and missionary busses; even the 27 tipper lorries and payloaders have all disappeared; if you go to the ministry, even the smallest generators cannot be found,” Ndubuaku said.
The task force chairman who said they had been mandated by Governor Emeka Ihedioha to recover all the movable properties has vowed to do exactly what he was assigned to do.