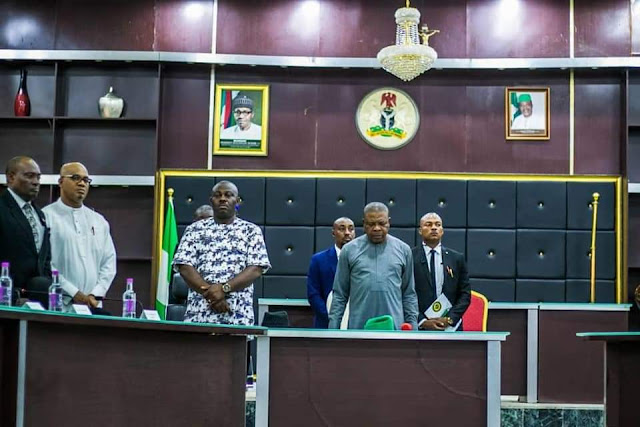 –Tells Ihedioha to use EFCC to recover stolen properties and funds

The Imo State House of Assembly led by Chinedu Offor yesterday suspended the 27 local government chairmen and 645 councilors in the state indefinitely.

In a motion moved by Bruno Ukoha (Ezin-Ihitte Mbaise Constituency), the House directed the suspended council bosses to immediately handover to directors of administration in their councils.

The lawmakers also ordered the Clerk, Chinelo Emeghara, to convey the House’ resolution to Governor Emeka Ihedioha and other appropriate quarters, saying the decision was taken following the chairmen’s neglect and refusal to appear before the House when they were summoned.

They equally enjoined Governor Ihedioha to set up a panel of inquiry to probe activities of the immediate past governor, Rochas Okorocha.

They argued that when constituted, the panel would review all debts and financial obligations, as well as determine whether they were duly incurred and whether recoveries could be made through relevant agencies.

It advised Ihedioha to engage anti-graft agencies to recover all looted state’s funds and government property.

Also in a motion by Mike Iheanatu (Aboh Mbaise Constituency), the lawmakers asked for a review of all land allocations, financial transactions and take inventory of all government assets and property, among other resolutions.

Onyeaaguocha, a former member of the House of Representatives made the allegation during his 54th birthday at his country home in Obinze, Owerri West Local Government Area at the weekend.

He also accused Okorocha of removing government vehicles and sensitive documents, which has made it difficult for the new administration to operate.

But Okorocha has refuted the allegations, saying he left a brand new Government House for Ihedioha and subsequent administrations to deliver smoothly.

However, Ihedioha has ordered all Permanent Secretaries to ensure that all documents used by the immediate past administration were handed over immediately.

He gave the directive during the swearing-in ceremony of Onyeaguocha and Chief of Staff, Chris Okewulonu, at Government House, Owerri.

The governor gave the Head, Imo Civil Service, Ama Eluwa and Principal Secretary, Government House, Emeka Duru till the end of today to comply with the directive.

He also ordered security personnel at Government House not to hinder any Imo indigene who wish to inspect the level of decay in the state access to the facility.

Meanwhile, Okorocha has asked Ihedioha to stop accusing him on daily basis and face the challenges of governance, just as he urged Ihedioha to search for where he kept his handover note.

In a statement issued yesterday by Okorocha’s Special Adviser on Media, Sam Onwuemeodo, the former governor also urged Ihedioha to stop blackmailing him.