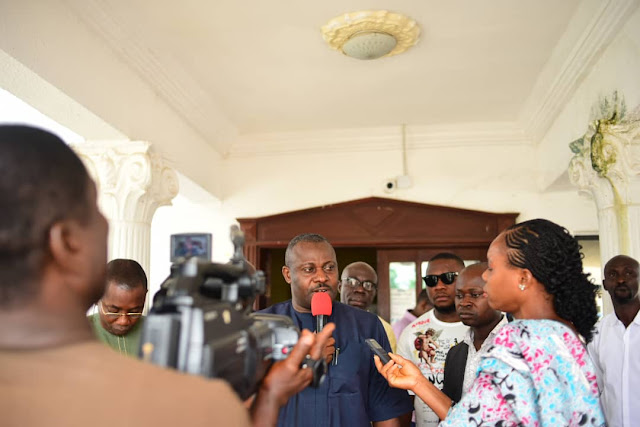 The Deputy Governor of Imo State, His Excellency Hon (Engr.) Gerald Irona, on Sunday assured the people of the state that the state government led by the Governor, His Excellency Rt. Hon. Emeka Ihedioha CON, is committed to tackling the security challenges in the state, especially addressing the menace of kidnapping, robbery, armed robbery, child theft and militancy in the oil producing communities of the state.

The Deputy Governor gave the assurance while addressing the press at the Sam Mbakwe Airport, Owerri, upon his arrival from Abuja where he had earlier in the week represented the Governor at the inaugural meeting of the National Economic Council (NEC).

He said that it was in furtherance to the government's commitment to provide security for all in the state that the Governor appointed one of the best security experts in the country who was a Director in the Department of State Services (DSS), Raymond Nkemdirim, as his Special Adviser on security to help fashion out strategies for adequate security in the state.

Noting that Mr. President had while inaugurating the National Executive Council (NEC) at the State House, Abuja, urged the state governments to tackle issues of insecurity, agriculture, health and education, the Deputy Governor assured that though there have been security challenges in the state, the state government under the leadership of Governor Emeka Ihedioha, is committed to addressing them.

He said: "There have been a lot of security challenges in the state: kidnapping, robbery, armed robbery, child theft and militancy in the oil producing communities, but we are going to tackle all of them.

"We needed a well experienced security officer to help the security chiefs in the state. That was why the Governor appointed Raymond Nkemdirim, one of our best in the country. He is from Anambra State but the Governor found him worthy for the job. He made the best catch by that appointment."

According to the Deputy Governor, the people of Imo State will soon begin to enjoy more of the government's policies with the inauguration of commissioners soon, which would give the government the full complement of the state executive council.

He assured that the state government will implement its robust policy on Agriculture, stressing that it would provide jobs and food security for the people.
Posted by IfeanyiCy Njoku
Labels: News