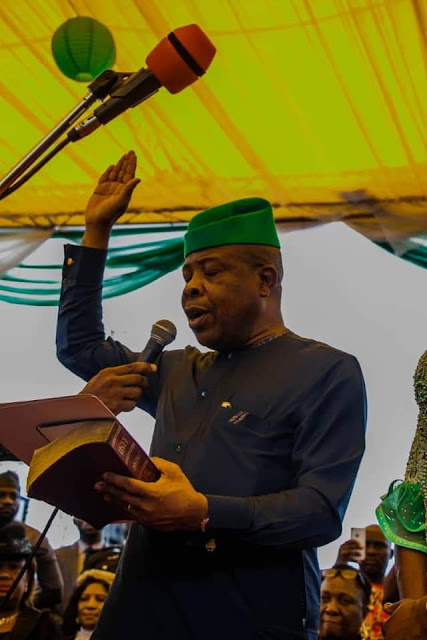 Okorocha, who made the announcement in Owerri through his Chief Press Secretary, Sam Onwuemedo, while swearing in 11 permanent secretaries as well as the new Accountant-General among others a week to handover to his successor in office, also explained what the money was meant for and banks they were lodged.

Former Governor Okorocha also claimed that he could not have access to the funds because of the several petitions written against him (Okorocha) to the Economic Financial Crimes Commission, EFCC, by Peoples Democratic Party, PDP, chieftains necessitating the blockage of the fund by the anti-crime agancy, EFCC.

He mentioned three banks where some of the monies were lodged to include:

According to the release, “Governor Rochas Okorocha has disclosed that he has kept N42.5 billion for his successor, Chief Emeka Ihedioha, stating that he decided to keep such amount for the incoming governor so that there won’t be excuses in carrying out activities of the government. 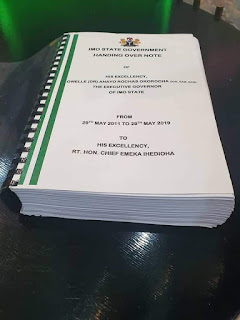 Okorocha breaks  down the funds as follows:

“The N8.1 billion that came into Imo State coffers from the state, local government and FAAC has not been expended; not even one naira has been taken away from it."

"N5.2 billion is the remnant of the Paris Club funds. Not one naira has been removed from it."

“The fourth is the RAMP fund of $60 million (N21.6 billion) and is also in Imo State Government’s account. The money is also here in Imo State and no one naira has been touched."

What Ihedioha is expected to do is to tell Imolites if truly the alleged amount by his predecessor as allegedly handed over to him is true to help Ndi-Imo situate and evaluate his administration going forward.

Was the said amount captured in the 2019 budget? For accountability and transparency in governance.

It's true that the Peoples Democratic Party led government in Imo State had set up an 8-member committee to review all financial transaction carried out by the Okorocha's administration and to carry out a forensic audit to establish sources of funds and how they are disbursed.

The committee, which is headed by Dr. Abraham Nwankwo, as Financial Advisory Committee, was tasked by Governor Emeka Ihedioha with the major responsibility of ascertaining and documenting the locations and balances on all bank accounts operated by Imo State government, its ministries, departments, and agencies as at May 29, 2019. 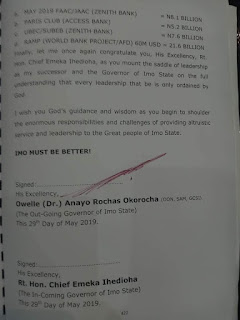 What Okorocha is not saying:

Several labour unions accused then Governor Rochas Okorocha of owing them salaries for more than a year.

Doctors in the state had embarked on a strike during the last month of Okorocha's administration and accused the Governor of paying only 70% of their salaries in about four years.

Pensioners in the state were owned by the Okorocha's administration running into billions of naira, Not forgetting contractual and judgment debts running in billions.

With all of these hanging over the head of Hon Emeka Ihedioha's administration, I, IfeanyiCy Njoku, Executive Director, Centre for Youth Development and Peace Initiative expect the newly sworn-in Governor of Imo State, who had received his predecessor's handover note through the Secretary to the Government of Imo state, Hon Uche Onyeagocha, to address Ndi-Imo, nay Nigerians and state clearly and factually the true financial position of the state, what he received from Okorocha's administration, assets and liabilities because in record keeping, and measurement of governance indices, his administration will be made to account for the income and expenditure of the state going forward, so the allegation by the Okorocha's regime must be properly cleared and situated.