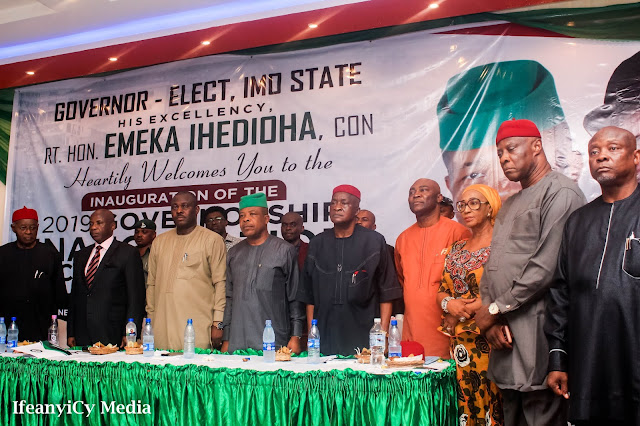 Unpleasant events in Nigeria, especially the events surrounding the civil war and events in the post civil war Nigeria, had forced many Nigerians, especially those from the Igbo extraction, to consider the mantra of one Nigeria as a boring, overused cliché often touted by those who preside over our commonwealth to make Nigerians look the other way while they pillage our treasury and run roughshod on the Nigerian people. Many people do not comprehend why the Igbo people who had just come out of the brutal civil war with millions of lives lost could be subjugated to very harsh economic conditions. Even a blind man could see clearly that the some people were carefully screwed in those policies, especially the indigenization policy.

To capture succinctly the brazen hypocrisy that characterize the claim of one Nigeria, former President Goodluck Jonathan noted in his book, My Transition Hours: "When some individuals preach one Nigeria in public, those who know them better in private simply chuckle...One Nigeria assumes profound differences in the polity. While some people use it as a prop for sloganeering, there are only few who mean it...For some people one Nigeria is an organism with mutative powers. Nothing is constant. It is a virtual reality device which they alter, degrade and upgrade, depending on the trend of the hour and as it suits their 'enlightened' self and group interests".

Nigeria operated under this climate at the time Yar'Adua became President. But with him as President it dawned on many that Nigeria stands a chance to be one united country in words and in deeds.

Born into an aristocratic family in Katsina State on August 15, 1951, Umau Musa Yar'Adua became the President of the Federal Republic of Nigeria on May 29, 2007. He died on May 5, 2010 and was buried in his Danmama home in Katsina State on May 6, 2010. Yar’Adua struck the international cord on his merit when he admitted that the presidential election of April 21, 2007, that brought him in as President was flawed. He initiated an electoral reform process to ensure that general elections across the country were transparent, fair and credible. This public acceptance and the subsequent action brought him international acclaim and also improved Nigeria's chequered international standing. Though he was President for less than three years, due to the impact of his policies, Nigerians have the feeling that he was President for decades.

President Yar’Adua was known across the country and beyond as a man of unquestionable integrity. He was seen as a man that was not corrupt. Though he was of an aristocratic family, he was more gentle than the dove and trustworthy. His integrity was attested to by his chieftaincy title, Matawalle, meaning, The Custodian of The Royal Treasury of the Katsina Emirate. Yar’Adua brought quality to governance. He was unarguably the first Nigerian President who was a graduate, having graduated from the Ahmadu Bello University in 1975 with B.Sc. in Education and Chemistry. He was also the first President who was Governor before becoming President. He served as the Governor of Katsina State from 1999 when Nigeria returned to democratic rule to 2007. His handling of the affairs of the country and the peace he brought signposted the hope that Nigeria could work again.

Yar’Adua’s Vice and eventual successor, Dr. Goodluck Ebele Jonathan, underscored his integrity when he eulogized the late President in his Facebook post on Sunday, April 5, marking the ninth year of the President’s death. He said that “President Yar'Adua was a man of integrity with a humble spirit who always took upon himself the burden of national reconciliation, peace-building, and democratic consolidation”. He was noted for saving up to N40bn for his state, Katsina, upon leaving office in 2007 as Governor, at a time most governors left empty treasury. This also portrayed him as a prudent manager of public resources.

Among the legacies Yar’Adua brought to Nigeria was the Rule of Law. It was one of the items on his seven-point agenda. Yar’Adua did not only preach the Rule of Law, he personified the Rule of Law in the Nigerian governance climate. Not long after he assumed office as President, he walked his talk on the Rule of Law by reversing Obasanjo’s twin increments on the Value Added Tax (VAT) and the pump price of fuel in the wake of protests by the Nigeria Labour Congress (NLC) and the Trade Union Congress (TUC). He based his action on the fact that his predecessor did not follow due process and the rule of law. This action endeared him to the Nigerian populace and gave them trust in the government. This was more striking considering that Yar’Adua became President on the back of massive support by President Obasanjo. Many Nigerians and the international community did not only see this as the adherence to the Rule of Law but the demonstration of uncommon courage in tackling the myriad of challenges confronting the nation no matter whose ox was gored.

President Yar’Adua also struck a critical cord with the Nigerian people when he deviated from what had become the norm and openly declared his assets and asked his appointees to follow suit. He also promptly enforced the Supreme Court ruling on the governorship of Anambra State, thereby making Mr. Peter Obi the first beneficiary of the rule of law as enunciated by the President. He also endeared himself to Nigerians when reversed the sale of refineries and other national assets by the Obasanjo administration and also refunded to Lagos State their federal allocation hitherto withheld by the erstwhile Obasanjo administration for years.

Perhaps the most united era in the annals of Nigeria is the time Yar’Adua held sway as President. Though a Muslim from the Northern part of Nigeria, he betrayed religious attachment when he embraced both Christians and Muslims alike. His love for Nigeria’s unity was also underlined by President Jonathan when he said in his post on his Facebook page that Yar’Adua used “the opportunity he had in public service to build bridges of love, foster unity and give hope to Nigerians”.

In a similar vein, former Governor of Imo, Dr. Ikedi Ohakim who shared close friendship with President Yar’Adua also underscored the late President’s knack for the unity of the country. In a statement on Sunday, he noted that “Under his watch, an Igbo man, Air Marshall Paul Dike, was the Chief of Defence Staff. Under his watch, A Yoruba man, Air Marshal Oluseyi Petinrin, was Air Force Chief. He didn't appoint all the Service Chiefs from his zone so as not to make it clear to others that they don't belong. He made us all feel like Nigerians”. He added that during the Yar’Adua’s presidency, “an Igbo man for the first time in Nigeria's history became the Inspector General of Police, and not only one but two Igbo men consecutively - Mike Mbama Okiro (2007 - 2009) and Ogbonna Okechukwu Onovo (2009 - 2010) - were appointed Inspector General of Police. He understood the pains of marginalization and under his watch, peace returned to the creeks”.

Ohakim also noted that the President handled the insecurity in the country, stressing that he “understood that the smile of a crocodile wasn't the way to gain the trust and acceptance of a people neither did he allow pythons to dance across the Southeast as we see today which has turned the once restive Ala-Igbo into a pensive zone sitting on a keg of TNT”.

As noted by former Governor Ikedi Ohakim, Yar’Adua’s era marked a watershed in proffering a holistic solution to difficult situations in the country. He did not unleash the full strength of his office in addressing the challenges posed by the Niger Delta militants both to the security and economy of the country. With effect from August 6, 2009, the federal government’s amnesty programme for militants in the Niger Delta started addressing the militancy in the region. The programme was designed to reduce the unrest in the oil-rich Niger Delta and create a conducive environment for socioeconomic and political activities to thrive. As part of the programme, the President offered unconditional pardon, trainings and cash payments to the militants who agreed to lay down their arms and embrace the programme, with the target of 10,000 militants. The federal government gave the militants a period of 60 days during which they could embrace the programme.

To further demonstrate his commitment to the programme, the federal government released Henry Okah, a leader of the Movement for the Emancipation of the Niger Delta (MEND), the most active militant group with another agreement to release former Governor of Bayelsa State, late Chief Diepreye Alamieyeseigha, who had been in detention.

“The number of participants in the amnesty programme, which expired on Sunday, exceeded government expectations and has already raised questions about how such large numbers of former fighters can be rehabilitated and reintegrated…Yar'Adua's amnesty offer was one of the most serious attempts yet to stem unrest which has prevented Nigeria from pumping much above two-thirds of its oil capacity, costing it billions of dollars in lost revenue”, said the report.

President Yar’Adua’s successful amnesty deal for the Niger Delta militants stands diametrical to the Operation Python Dance launched in the Southeast by the Buhari administration as a way of addressing the non-armed agitation in the Southeast for the restoration of Biafra by the use of military force with heavy casualties.

The takeaway is that while Yar’Adua would have preferred a peaceful resolution of the agitation in the Southeast region of Nigeria, President Buhari has no qualms allowing pythons to dance across the breadth and length of the Southeast or crocodile smiling across the South-South and South West. He would even declare that only the 95% that voted for him would benefit from his government, while the 7% would not, further aggravating the hot joints in the country. No wonder Nigerians miss President Yar’Adua, nine years after, and they will continue to miss him.

Collins Ughalaa could be reached via email: ughalaacollins@gmail.com, or by telephone:07066222944.
Posted by IfeanyiCy Njoku
Labels: Opinion