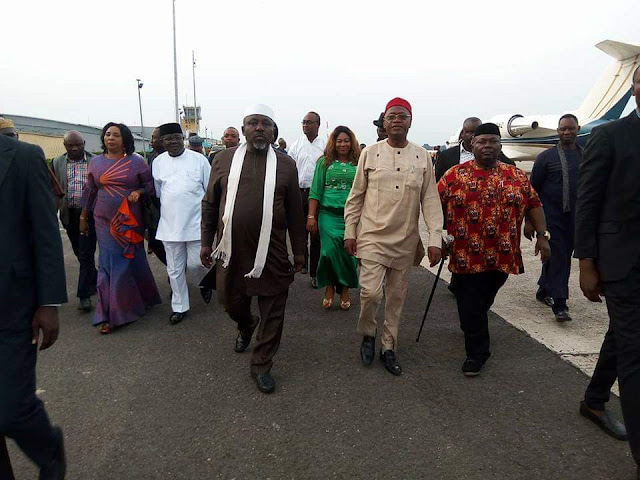 Imo State Governor, Rochas Okorocha, said the ruling All Progressives Congress(APC) has inflicted the greatest devilish political machinations against his person ten times more than what he would have experienced were he to be in the People’s Democratic Party (PDP).

Okorocha, who said he remains a staunch member of the APC despite efforts to frustrate him out of the party, berated its National Chairman, Adams Oshimhole and some leaders for working with the Independent National Electoral Commission (INEC) to ensure he does not get his certificate of return as the duly elected senator for Imo West Senatorial District.

He said it was regrettable the evil that made him to leave the PDP and join forces with the progressives had become more fiery within the ruling party and large dose of that was being inflicted on him with aim of damaging his political career.

The embattled governor spoke at an interactive session with newsmen in Abuja. He said: “The evil I feared in the PDP has befallen me ten times in the APC. Last week, I wrote a letter to INEC for the first time myself, informing INEC of their wrong doings and illegal actions taken by INEC to withhold my certificate on mere allegations of duress which was never founded, neither was there any committee set up to investigate the matter.


“So, INEC on their own believe the reports of their Returning Officer without investigating the authenticity of the investigation. So, there was no issue of fair hearing at all.

“What is important here is that INEC does not have the power to withhold the certificate of return having declared the result. I believe the INEC chairman is up to a game with the chairman of the APC who are being used as the people to frustrate my coming to the Senate and this is politically motivated. I’ve given enough time that INEC might correct itself and do the needful and issue me my certificate of return but to no avail.

“Many things have happened so far and these should be of concern to everyone. INEC that made the submission to the tribunal have gone back requesting to withdraw it because the submission was defending the declaration by INEC.

“But because the submission seems to be in my favour, they have said they want to withdraw the affidavit which is out of time. The withdrawal was made by one of their staff, who said that Festus Okoye, a Commissioner in INEC, has threatened to sack him if he does not withdraw it.

“So, there is a huge threat going on in INEC. Festus Okoye is presently being used as the hatchet man; he has gone to the tribunal in Imo asking to withdraw the affidavit that has been filed defending APC.

“I wonder what they want to do with the certificate, if they don’t give it to me, who will they give it to? Maybe they will give it to Festus Okoye because he is from my Senatorial zone but what they are doing is presenting INEC as a lying organisation and that is dangerous for our democracy because, as it stands right now, the image of INEC is bastardised.

“What it means is that tomorrow somebody can withhold the certificate of anybody because you don’t like his face because you feel that he wants to politically challenge you in future. “Asked why he has not taken advantage of his close relationship to President  Muhammadu Buhari to seek for his intervention with the leadership of the party, Okorocha said he did not want to bother the President with such an issue especially  as it concerns INEC.

“If you know the President well, you would know that he will never intervene as he would only keep mute. But whether President Buhari speaks or not, INEC should do the right thing by giving me my certificate of return,” he declared.