I will Not Witch-hunt Anyone As Governor - Ihedioha 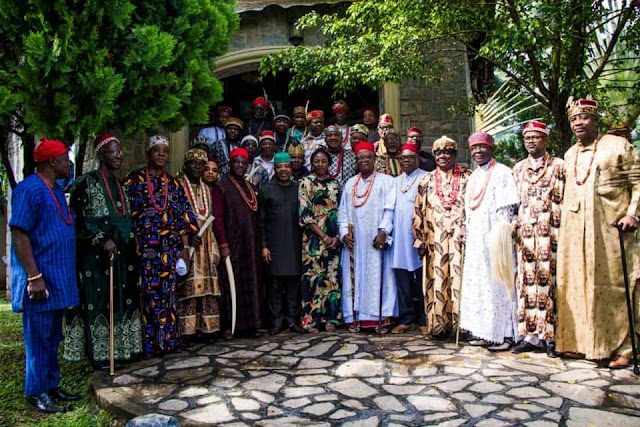 The Imo State Governor-Elect, Rt. Hon. Emeka Ihedioha has assured that his administration will not witch-hunt anyone or group who did not support nor voted for his party at the last governorship election held in the State.

Addressing the leadership of the Imo State Council of Ndi Eze, led by HRM, Eze Samuel Agunwa Ohiri, at his Mbutu Mbaise country home, yesterday when the Royal rulers paid him a courtesy Visit, He noted that he has already extended hands of fellowship to his follow Governorship contestants at the polls immediately the Independent National Electoral Commision(INEC) declared him winner.

He appealed to all Stakeholders in the State to join hands with him to rebuild Imo and transform it to the Imo of our collective dreams, reassuring that his administration will uphold rule of law, accountability, transparency and due process.

He charged the Monarchs to ensure that they identify the bad eggs within their various communities, stressing that Imo under his watch will ensure that the autonomy status of their various communities are respected. He thanked the traditional rulers for warmly receiving him and the PDP campaign train in all the LGAs visited during the election, noting that at no point did any traditional ruler declined to grant them audience.

Speaking further, the Governor Elect urged the traditional rulers to always carry their people along, while emphasizing that His duty as a governor will not be to select traditional rulers for communities but abide by the wishes of the people. He maintained that the incoming administration will allow communities choose their monarchs to ensure unity, peace and harmony across the communities.

Earlier, the Chairman Imo State Council of Ndi Eze, HRM, Eze Samuel Ohiri who congratulated the Governor Elect on his victory at the last Governorship election in the State, described his victory as an act of God and a collective will of Ndi Imo. He assured the Governor Elect of the support of the traditional rulers in making sure that His messages and policies are taken to the grassroots.

Eze Ohiri noted that He has no doubt that the Governor Elect, His Excellency, Rt. Hon. Emeka Ihedioha, will bring his wealth of experience to bear on his new assignment,having served as the Deputy Speaker, House of Representatives, where he maintained an unbeatable track record and antecedents.

The delegation had representatives of Traditional Rulers from the 27 Local Government in the State.
Posted by IfeanyiCy Njoku
Labels: News