Governor Rochas Okorocha Fires Back at EFCC Chairman Over His Investigation 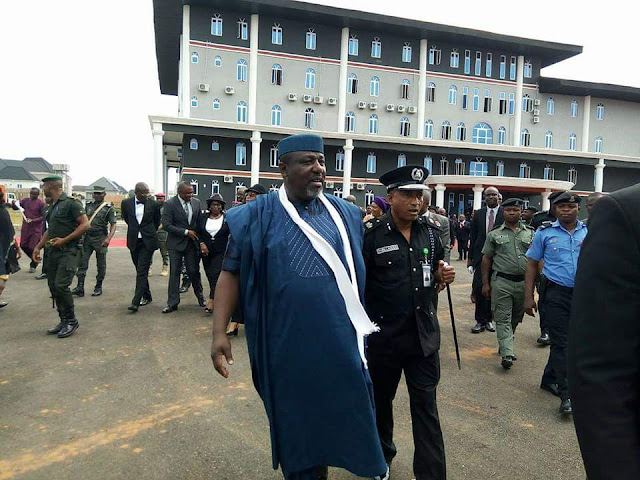 Governor of Imo State, Rochas Okorocha, has warned the Acting Chairman of the Economic and Financial Crimes Commission (EFCC), Ibrahim Magu, to stick strictly to the mandate of the commission and not be a tool in hands of politicians.
Magu had during a conference in London, disclosed that Okorocha was under the watchlist of EFCC.
Also, last week, the Commission’s zonal head for South East, Usman Imam, disclosed that it was investigating Okorocha and the state government for alleged money laundering.
According to Imam, the Imo State Government used funds meant for workers during the just concluded elections.

Reacting in a statement, the Governor’s Chief Press Secretary, Sam Onwuemeodo, said, “On Monday, May 20, 2019, the Chairman of the Economic and Financial Crime Commission, EFCC, Alhaji Ibrahim Magu was quoted to have told Journalists at a Press Conference in London that the Commission was investigating Governor Rochas Okorocha over the bailout fund.

“Also on Friday, May 17, 2019, the Commission’s Zonal Head for South-East, Mr. Usman Imam held a Press Conference in Enugu where he told the world too that the Commission was investigating Governor Okorocha.


“So, Mr. Imam holding his own Press Conference on Okorocha on Friday, May 17, 2019, in Enugu and the Chairman of the Commission himself Alhaji Magu holding his own press conference also on Okorocha, on Monday, May 20, 2019, and only two days after, raises genuine concern. And has also added fillip to the governor’s earlier worry that those behind the drama over his Certificate of Return have not gone to sleep but have continued to spread their dragnets or tentacles.

“If you ask us, we won’t join issues with the EFCC as an Institution and with Alhaji Magu as an individual. Investigating individuals, governments, institutions etc, is part of the Commission’s own rules of engagement and nobody should prevent them or begrudge them for doing that. We only pray that the Commission should not allow undue infiltration.

“Good enough, both Alhaji Magu and Mr. Imam never accused the governor of mismanagement or diversion, looking at the Contents of their Press Conferences. They confirmed that the Commission is in Custody of the money. Out of the N8billion they quoted, they also confirmed that N7.9billion is what they blocked. Then, what is Owelle’s case? And the governor is not owing salary.”


It added that “Mr. Imam also threw a kite which could not fly when he told his audience that if not for their timely intervention“Over N5billion would have allegedly been deployed in vote-buying by Okorocha’s administration.

“How he arrived at that conclusion is what he never said. In other words, he believed what the petitioners wrote. Since investigation is still on, perhaps, at the end of it, the truth will become clearer especially when the incident happened long before the 2019 elections. And one could not have bought votes in the vacuum. Ultimately, vote-buying must be on the election day and perhaps, at the Polling Units where the voters were expected to be.

“Alhaji Magu is doing a good job as the head of the EFCC. But he should keep the 5th columnists at arms length. He should not eat with them even with the longest spoon. With more than one thousand landmark and verifiable projects to his credit, Governor Okorocha must have managed the resources of the State in his time as governor with high sense of prudence. And for patriotic Imo people, he remains the Defending Champion of the Imo governorship since what he has achieved in eight years exceeded all that those before him had achieved put together.”