Menu
Home » Features » As Okorocha Steps Out, Ihedioha Moves In

As Okorocha Steps Out, Ihedioha Moves In 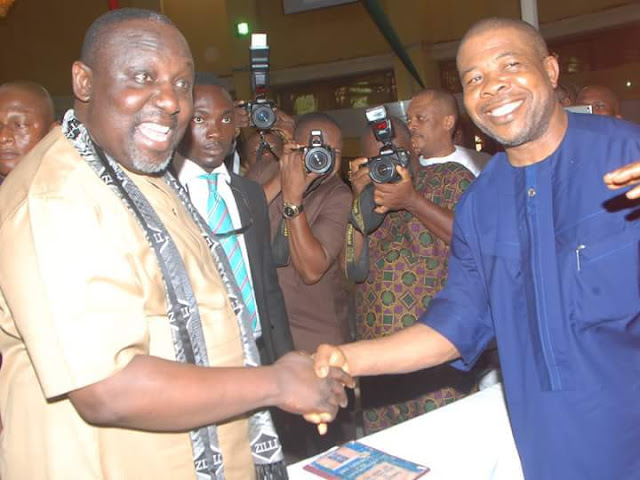 Everything that has a beginning has an end. By 12Noon on Wednesday May 29,2019, one era will end in Imo State, while another begins.
That particular day, Chief Rochas Okorocha will cease to be the Chief Executive of the State, while Rt Hon Emeka Ihedioha takes the seat as the 6th Civilian Governor of Imo State.

For many people, the outgoing Governor means different things to them. While a majority see the Okorocha regime as tumultuous and harsh on the masses, some people also describe it as the best thing ever to happen to them. It is different strokes for different people.

But for people like us, the Okorocha regime was rough, tough, harsh, psychologically draining and tasking, as things took a dive for  the worse every day. One for eight years slept with two eyes open, because I choose to xray the happenings in the Okorocha administration, by honestly advising him as an outsider who sought for no favour from the Government but for the interest of the Governor and Imo people.

However, sycophants and hangers-on never gave the outgoing Governor the space to look through the “window” and see things for himself.
But thank God, from next Wednesday, Okorocha will know who really his friends are. He will soon discover that his friends are those who  had continued to tell him the truth even at the risk of their lives.

When Okorocha leaves Douglas House finally on Wednesday, he will discover that even those he took as his closest allies will not stick with him for too long. Power attracts “friends” like Bees to Honey.

Those who wake him up with “shouts” of “His Excellency” every morning will still remain in the Douglas House to serve the next occupant (Tenant) who will live there  for the next four years, or more, if his mandate is renewed.

When Governor Okorocha reappeared in 2011 after his first trial to be Governor of Imo State in 1999 (12years then) he posed like a Dove and an emancipator of the poor, through his Rochas Foundation, which attracted the electorate to his side.

The mantra then was that if he could use his personal funds to provide succor to the poor, what would he then do if he is allowed to get hold of Imo funds that run into Billions.

Okorocha even capped it all by saying that he was making sacrifice for the masses of Imo State for descending low from his Abuja height to contest for Governorship seat of Imo.

The Carmel's back was broken when he said he was on a “Rescue Mission” and will quit office just after one term of four years under which period he would have salvaged Imo.

Imo Electorate had no alternative than to fall for Okorocha whose mien and candour then could have swept off the most pessimist.

Now, the journey which began in 2011 will  come to an end on Wednesday. Therefore, the Chicken has finally come home to roost. Whatever Okorocha is leaving behind now would be dumped on the door step of Rt Hon Emeka Ihedioha his successor.  Both  Assets and Liabilities.

However, I would have been happy if Ihedioha  inherits more Assets than Liabilities so that the suffering Imo populace could breath fresh air for once after Eight years of strife and hunger. They went through a lot of Economic trauma and political experiment in the hands of Okorocha.

From all indications, what will face Ihedioha will baffle him. Indeed, Okorocha shook the table so much that a lot of things fell  on the ground. It therefore requires extra ordinary effort  for Ihedioha to pick them up all.

To many who believe in window-dressing, grandstanding and playing to the gallery, Okorocha achieved a lot. But if you take a deep look into all the sectors of Imo State during his era, you will discover that there is a lot to be done to remedy the State now. 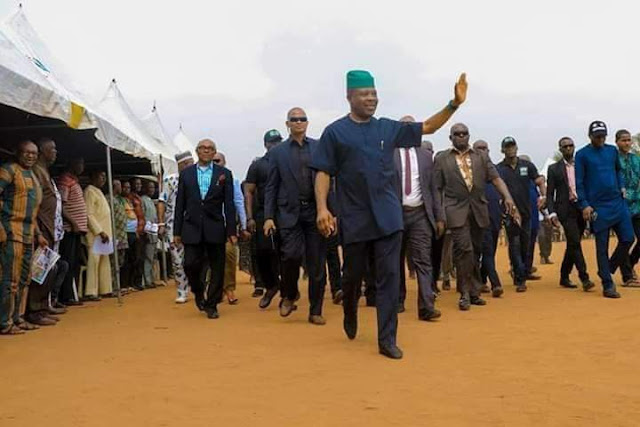 Unfortunately in the last eight years, Okorocha touched a lot of things in Imo and left them undone. His administration was never focused but impressionist. Had Okorocha concentrated in some of the policies he initiated than dabbling into many things at the same time, a majority of Imo people would be missing him from Wednesday.

He said he was in a hurry because he had just one term to fix Imo troubles and therefore adopted “no due process” method, which Imo people tolerated earlier on, provided that will lead the Governor achieve laudable ventures for Imo people.
But the masses were shocked when he moved for a second term against his earlier promise of one term, and continued with his “No due process” for eight years.

For being in a “hurry” Okorocha “attacked” the civil service system and completely over turned every existing ethic of that sector.
Permanent Secretaries were sacked without querry, workers wore uniforms like primary school students, civil servants salaries were negotiated, while allowances of pensioners never came.
At a point civil servants were charged to come to work three days, a week while the remaining days should be spent in their farms.

Okorocha, of course built roads. But that effort was destroyed on the altar of unprofessional and inferior roads that could not last more than a few months. The frequent cries of Imo people could not stop Okorocha from constructing what the people called “China roads”.

Unfortunately, all that are now to the detriment of Okorocha himself and his regime, as most of those roads will collapse and disappear before Okorocha spends three months out of office. Is that a good a legacy for an era?

Imo people will ever remember that it was the Okorocha's regime that destroyed most of the structures erected by former administrations with Imo State tax payers money.

He demolished Family Support Program FSP premises Wetheral road that was constructed by Col. Zubuiru’s wife that Housed Restaurants, gyms, churches, supermarkets etc and replaced it with three empty Halls now called Imo exhibition center. To exhibit what when peoples sources of income were destroyed? He mauled down Dan Anyiam and Old Stadium shopping Malls for what only God knows!

Okorocha demolished Water Corporation and for eight years there was no pipe borne water in the State capital Owerri. He destroyed Eke Ukwu Owerri, Orie Amaraku, Ubomiri, Mbidi and other markets even when his administration could not employ new workers. Those employed by other regimes were sacked by him. Unfortunately, markets are the only “Factories” that employ our teeming unemployed graduates.

In the Health Sector, the General Hospitals that were giving moderate services to the sick were destroyed for “Big House” General Hospitals. And till date those Buildings are still uncompleted and never equipped.

Even if the job of all Imo citizens is to get sick every day, the State does not deserve twenty seven General Hospitals.

I visited the Stadia in Okigwe and Orlu last week. They are good jobs. But why did the Governor allow the main State Stadium in Owerri to decay beyond repair? Was it intentional to built new Stadia and abandon old ones? It sounds penny wise pounds foolish.

For the first time in Imo, the State Football Club, Heartland FC was demoted to second Division under Okorocha. And presently, if time is not taken the club is heading for perdition.

Unfortunately, the Okorocha administration did not listen to anybody but only to itself.
He destroyed the Local Government system by not conducting LGA elections for seven years. His birthdays were declared as public Holidays in Imo, and questions were not asked.

This was the reason the Governor will come before the Press and desecrate the same throne he is occupying by abusing his predecessors, including the revered Sam Mbakwe.

He saw the position of Governor as a competition with everybody in the State and in the process ostracized a lot of Imo citizens and was at peace that a majority of Imo people were chased away by his regime.

At a time Okorocha voluntarily told the world that he had retired all politicians in Imo State including his predecessors in office. But soon Okorocha would be Ex- Governor. How would he feel when his successor says he has retired him.
Okorocha was the King of Imo State. He was Imo and Imo was him

Remember he solely by himself pegged the age of his predecessor at Fifty years.
On his own, without consulting Imo people, he shared all political positions from the Governorship to Chairmen and Councilors of LGAs.
But unfortunately, Imo State is a democratic society and owned by Orlu, Okigwe and Owerri people. The State elects its Governors every four years.

However, Imo State is very difficult to governor. You take the people for granted at your own peril.
The Imo masses always look gullible, but they are highly educated and like to mind their businesses but never incur their wrath like Okorocha when you push them to the wall and they will show you they are hard nuts.

Okorocha had plans to bestrode Imo like a colossus, but that tall dream has collapsed.  The chance is lost and lost forever.
But soon, no matter what Okorocha must have done, he will become history. Imo people forget and forgive easily and soon the focus will shift to Emeka Ihedioha. Imo people are difficult to please. Ihedioha must gird his loin, but must be a good history student by lifting a few pages from Okorocha's scenario. Meanwhile, thank you, Okorocha for coming. we shall miss you.
Posted by IfeanyiCy Njoku
Labels: Features