Okorocha Hits Hard on Achike Udenwa, Says He is the Worst Imo Governor 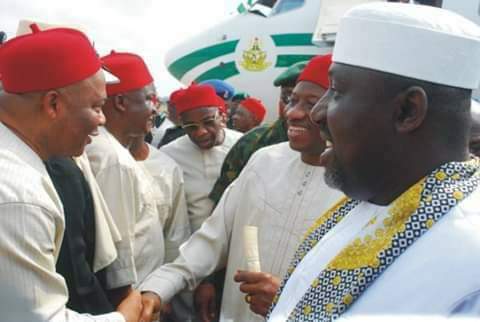 Okorocha said apart from paying special attention to gossips and frivolities, Udenwa scuttled the political dreams of many young men who served under him.


Rochas Okorocha, Governor of Imo State, says former Governor Achike Udenwa, is the worst governor the state has ever had.

In a statement issued by Sam Obwuemeodo, the Chief Press Secretary to Okorocha, the governor challenged Udenwa to publish his achievements in the eight years he served as governor for Imo people to compare notes.

He described the former governor’s reign as a waste.

Okorocha said apart from paying special attention to gossips and frivolities, Udenwa scuttled the political dreams of many young men who served under him.

Okorocha, who decried the recent incessant attacks on him and his immediate predecessor, Ikedi Ohakim, by Udenwa, said he had earlier chosen to ignore him because sometimes silence was golden.

The statement read: “In less than four weeks, Chief Achike Udenwa who governed Imo State from 1999 to 2007 has launched unprecedented media attacks against Governor Okorocha, Chief Ohakim and President Buhari.

“While Chief Ohakim had replied him, we decided to hold our peace because we believe that at times, silence is golden. But the two-term former governor has continued the attack on Imo governor for reasons that could only be known to him.

“Chief Udenwa is adjudged the worst governor Imo State has had; both military and civilian. He blew away the eight years he held sway as governor and should not blame anybody but himself.