IHEDIOHA NEEDS NO DISTRACTION, OHAKIM URGES AGGRIEVED GUBER CANDIDATES TO WITHDRAW THEIR CASES FROM THE TRIBUNAL 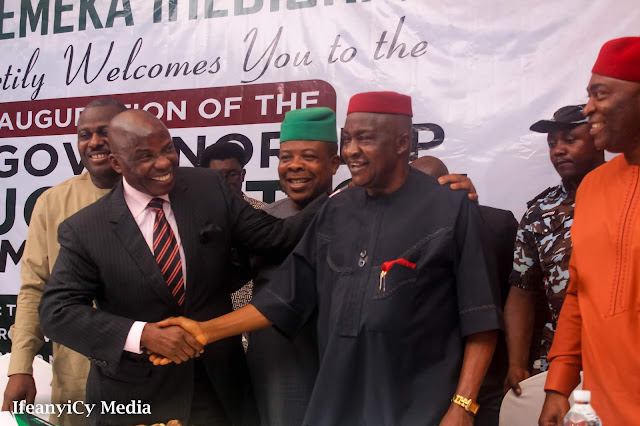 His Excellency Dr. Ikedi Ohakim, the immediate past Governor of Imo State, has called on the governorship candidates in the last governorship election in Imo State who feel aggrieved over the outcome of the polls to sheathe the sword and withdraw their petitions from the Tribunal, saying that doing so is in the best interest of the state.

Ohakim disclosed this while speaking at the inauguration of the 2019 Inauguration Planning and Handover Committee of the Governor-Elect, His Excellency Rt. Hon. Emeka Ihedioha, on Tuesday at the New Hall of Rockview Hotel, Owerri.

Ohakim said that the aggrieved governorship candidates would be helping the state when they withdraw their petitions, saying that he suffered suck fate when he faced 19 court cases for the period of four years he was Governor, and therefore would not want Ihedioha to pass through same horrible experiences and distractions.

Noting that continuing with the court cases would be inimical to the progress of the state, Ohakim explained that it would scare away development partners and other investors because investors do not  invest where there are litigations. He said the numerous litigations he faced was the reason the foreign partners for the refinery project located at Ohaji/Egbema Local Government Area pulled out.

He observed that Ihedioha is coming to lead in a collapsed state and therefore does not need distractions but prayers and support from all and sundry.

He said that Ihedioha possesses the qualities needed to deliver and called on the members of the Inauguration Planning and Handover Committee to be good representatives of the Governor-Elect in their communities and and wards.

However, the Governor-Elect, Rt. Hon. Emeka Ihedioha, has commended Dr. Ikedi Ohakim for his display of the spirit of sportsmanship, assuring that Imo State will rise again under his watch.