WHY I DONT ENVY IHEDIOHA By HENRY EKPE 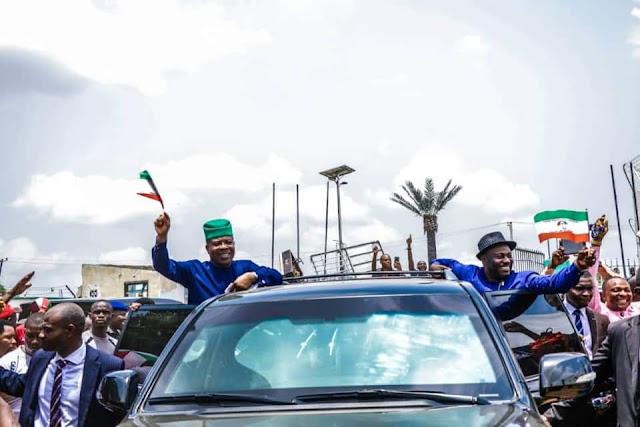 Rt. Hon Emeka Ihedioha is the Governor-elect of Imo State. On May 29, 2019, he would be officially sworn-in as the sixth civilian Governor of the state after Dr Sam Mbakwe, Senator Evan Enwerem, Chief Achike Udenwa, Dr Ikedi Ohakim, and the out-going Owelle Rochas Okorocha, in that order.

But I don't envy Ihedioha. He has to gird his loin, because the task facing him as the next chief executive of Imo State from 2019 to 2023 is enormous.
The reason is simple. The out-going Okorocha's regime has raped Imo State, vandalized its economy, leaving the State prostrate.

Therefore, the first few years in office will be hazardous for Ihedioha and his team, because apart from the comatose state Okorocha left Imo State and its citizens, he would use the remaining few weeks in office to lay bobby traps for Ihedioha, for the incoming Governor not to have a smooth start in office.

However, from all indications, Ihedioha with the experience he had acquired so far from politics and economy will be equal to the task ahead.

When Okorocha in 2011 was about hoodwinking Imo electorate into mistaking him as the Messiah they have all been waiting for, he dubbed his campaign organization “Rescue Mission”. But eight years after, Imo people can now attest if really Okorocha came to “rescue” the masses, or himself, family, friends and cronies.

By every imagination, Imo State is left worse by Okorocha than he met it in 2011.
This is where Ihedioha's job is cut out for him. The new Governor must be bold and focused to redeem and rebuild all that Okorocha's invading Army of occupation have left vandalized and looted.

When Okorocha arrived in 2011, Imo State capital, Owerri city was the cleanest in Nigeria, with paved paths, green grasses and ornamented flowers. Owerri had clean Pipe Borne water and working Roads with drainages. Today all those are gone and needs to be fixed and corrected.
Mountain of refuse bins have returned with metric tones of dirts scattered everywhere.

Motor parks, artisans, hoodlums, hawkers and task forces who never existed before are now the major eye sights, but eye sores beheld now in the city of Owerri that used to be the beauty of all eyes.

Lack of Industries has remained been the bane of Imo, even before Okorocha arrived, as there are no places to engage the teeming graduates that are churned out every year by the numerous high Institutions that are in Owerri.

Believing that Okorocha meant business when he said he was going to provide Factories and Industries , the masses fell for his “Industry Industry” Job, Job” slogan.
After so many trips to Turkey, Kosovo, Vietman etc with party members who passed for Industrialists and Business men, Okorocha is leaving office after Eight years without attracting even one “Pure water” company to Imo State.

Imo people are majorly civil servants and Traders, but rather than improve the welfare of the civil servants and build more markets, which will oil the economy of Imo State by circulating wealth, the story is now pathetic after Okorocha's eight miserable years.

The Okorocha expiring regime deprived civil servants of their monthly pay, and whenever the poor workers are remembered, they get as salaries whatever pleased the Governor.
Pensioners are owed endlessly and their Graduated children have no jobs, which eventually led to the sudden death of most of them who could not afford drugs for sicknesses caused by old age and stress.

Rather than improve the state economy powered by commerce, Okorocha mauled down markets around the State capital, Owerri and capped it with the demolition of Ekeukwu Owerri Market which served as the major Industry that employs over one million Imo citizens.

As if that was not enough, big Shopping plazas that boomed the town were destroyed.
Old Stadium, New Stadium, and Ikenegbu Shopping Plazas were pulled down, with nothing of any economic value put in their places till date.
The Ikenegbu Plaza was replaced with “Eze Imo” palace, where the legendary Mbari Imo that represented our culture and custom was destroyed.

The family support programe (FSP) complex at wethral road that housed shops, eatries, halls, churches and children play grounds was demolished and four structures that look like mosques have now taken over the place, with over-grown weeds.

With this scary situation, can I envy Ihedioha? Rather he needs support and prayers because the matter is serious.

When Okorocha came, Imo State had a functional local government system, and development centre councils with periodic elections that produced elected council chairmen and councilors. But eight years after, the twenty seven LGAs in Imo State are dead and buried.

During the reign of Achike Udenwa and Ikedi Ohakim, the LGAs served as conduits through which power was deployed to the grass roots, which necessitated rapid development in the communities.

When Okorocha arrived, he rather created his own obnoxious local government system and called it CGC with GLO and others.
(Whatever that meant). Along the way he abandoned these self-created systems and the entire Imo State collapsed. This is because there cannot be Imo State without her LGAs.

Okorocha directed all funds going to LGAs to himself, and dished out stipends to the masses who own the money through hand-picked stooges as TC Chairmen.
From May 29, 2019, the LGAs will be Ihedoha's major headache because Okorocha has destroyed that arm of Government.

But Ihedioha has promised to recover Imo LGAs from its present ruin. Luckily it was Ihedioha that headed the Committee on Local Government reforms while serving as Deputy Speaker of House of Representatives.

Ihedioha, I also pity you in the Sports sector of Imo State. That area is also dead.Before Okorocha came, the Dan Anyiam stadium Owerri was one of the best in Nigeria. But today, the State-owned football Team, Heartland Football club has been banished to Okigwe stadium, because Dan Anyiam does not measure up to NFA standard.
Heartland FC was for the first time in the history of Imo State relegated to second Division under Okorocha's regime. The club managed to return to the elite division now due to the personal contributions of some Imolites who felt humiliated that dear darling Team could be so abandoned, and this was a team that had won many National and International laurels before Okorocha arrived the scene
On the education sector which the outgoing regime usually boast of, it is a story of motion without movement.

Based on the indices available, Imo State, which used to be among the first four in WAEC and NECO now comes a distance tenth. Many Departments in IMSU have been de-accredited. Number of Imo born students into IMSU have also dropped due to Okorocha's “highest Bidder” system of Education.

In some secondary schools in Imo, only two Teachers take on over six hundred students in all subjects available. Teachers are not paid as at when due.A quality education is better than a quantity education.
Okorocha's regime sunk millions of naira into agriculture with nothing to show for it.
Remember “Ikuola Nkwu?” mantra. At a point Okorocha reduced working days to only three days for Imo workers to engage in farming. But with such bizarre system which raised much eye brow in the entire federation, what did Okorocha have for Imo people on the Agricultural sector now he is leaving?. Instead he went and packaged Rice grown elsewhere and called it “Imo Rice”.

On the area of road project, it is true Okorocha embarked on too many of them. But the question now is; as he leaves office next few months, how many of these roads are still standing today?
Instead of planting Trees that will not only beautify the State, but also provide shade and control erosion, Okorocha erected over one Hundred thousand pillars on Owerri Roads, with Iron bars, which have no socio-economic value to Imo people but death traps in the future.

Rather than put street lights, the out-going administration “planted” artificial palm Trees whose meaning no Town Planner can decipher.
In the Area of Judiciary, Okorocha did not mince words when he told Imo people immediately he was sworn in that he abhors rules and regulations when he said he will not adhere to “due process”.

For the Eight years he was in office, Okorocha did not obey one court order, except those that suits his whims and caprices.

The Imo Health sector was functional with modest General Hospitals across the twenty seven LGAs of the State.
Okorocha rather came with the idea of twenty six bogus General Hospitals that remain under construction until he wounds up office next few weeks.

On socio-contract with the masses, Okorocha left Imo State more divided than he met it.
After Eight years in office, he wanted to foist another Orlu man in office, when Orlu had garnered a total sixteen years, with Okigwe Eight years and Owerri just Sixteen months.
It was his draconian attitude to office, and   disregard to Imo people that pitted him against the masses and a good riddance to Jack Boot Government.

At a period Imo people were begging for meaningful projects that will benefit the poor masses, Okorocha was busy moulding statues of Rogue Presidents facing corruption charges in their home countries.
And these statues took millions of Tax payers money to be erected.
Okorocha spent Hundreds of millions of Naira to put up Christmas Trees, even when civil servants went home without salaries. Certainly this is a frivolity Ihedioha will not engage in.

In the area of security, Okorocha inherited a well-organized Imo vigilante organization that was disciplined and with a civil orientation group of educated forces, with a focus to serve and protect Imo people.

But as Okorocha recedes back home, his successor will be left with a security outfit called Imo security Net work that was moulded in the image of their sponsor, whose orders they only obey.
Unlike the Imo vigilante and Imo orientation corps of yore, the Imo security Network has an ideology tailored towards their financier as a person and individual, and not as a Group working for the State and its citizens. At a point, it became a Gestapo organization terrorizing Imo citizens it ought to protect.

Therefore, when Okorocha's Media office headed by FC Jones and Sam Onwuemedo rants about the humungous achievements recorded by their principal, it only means that they are gauging the out-going Governor based on the opulence they see around him, and what themselves have acquired personally as individuals without putting the ravaged Imo masses into question.

When former Governor Ikedi Ohakim left office, he put it on record that he left behind N26.B for his successor, Okorocha.
Indeed , as Okorocha departs Douglas House on May 29, 2019, Imo people would like to hear how much he left in the coffers of Imo State for his successor, Rt Hon Emeka Ihedioha.

But honestly speaking, Ihedioha has a big task in his hands because Okorocha is leaving Imo worse.
Posted by IfeanyiCy Njoku
Labels: Feature