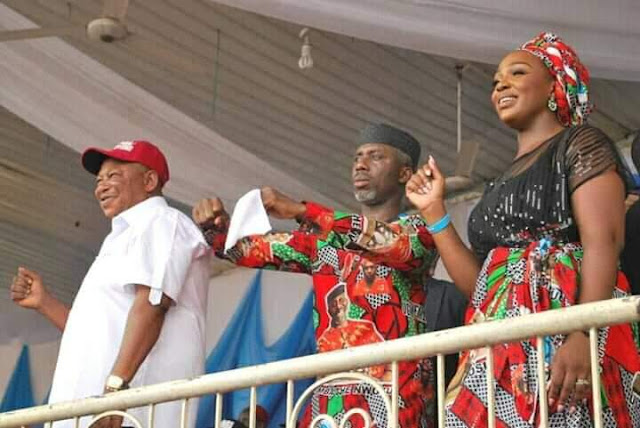 The candidate of the Action Alliance (AA) in the just concluded Imo Gubernatorial election,  Uche Nwosu has rejected the result of the election which placed Emeka Ihedioha, Peoples Democratic Party, PDP, gubernatorial candidate as the winner of the exercise.
In a press statement signed by director of media and publicity Ugwumba Uche Nwosu Campaign Organization read thus:
"EMEKA IHEDIOHA'S VICTORY DANCE SHALL BE SHORT-LIVED
After a careful review of incidents of the last few days, which culminated in the unlawful declaration of Rt. Hon. Emeka Ihedioha as the winner of the Imo State gubernatorial election which held on Saturday 9th of March, 2019, His Excellency Ugwumba Uche Nwosu has come to the conclusion that he will not be congratulating the erroneously declared winner of the governorship election, given the following reasons:
1. While the conduct of the governorship election was to some extent free, fair and credible in most parts of Imo West Senatorial District, except Oru-east and Oguta, and Imo North Senatorial District, there were clear incidences of electoral fraud, viz; vote manipulation, padding, non usage of card reader for accreditation, ballot box snatching, violence, kidnapping of electoral officials and rabid intimidation of voters in the Imo East Senatorial District part of the State, which should render results from these areas as null and void.
2. It is ridiculously curious that in a State, where the general voter turnout was about 30% in 23 LGAs of the State, the turnout in Ezinihitte, Aboh and Ahiazu Mbaise was far higher than 75%, with Aboh-mbaise recording an unprecedented turnout of more than 90%. The total figure of votes registered for the declared winner of the election in these three LGAs alone amounted to about, 133,000 votes out of over 273,000 total votes allocated to him.
3. While Smart Card Readers were used for accreditation in all parts of Imo West Senatorial District and Imo North Senatorial District, manual accreditation was allowed in all the LGAs in Imo East Senatorial District, where Chief Emeka Ihedioha hails from and considers his stronghold.
4. More than 150,000 votes were cancelled in Imo West Senatorial District alone by the Collation officers, acting under the instruction of the Resident Electoral Commissioner for Imo State. These 150,000 votes were 98% in favour of the Action Alliance candidate, His Excellency Ugwumba Uche Nwosu.
5. Our Party agents were harrassed, intimidated and even assaulted by agents and thugs loyal to the People's Democratic Party when they made attempts to draw the attention of electoral officials to the mindless fraud been perpetrated by the PDP.
6. We are disappointed that some officials for this election were clearly partial and boldly partisan during the process of collation of votes, with some top ranking officials overheard barking out instructions that everything about the AA must be demolished.
7. We would be disappointing our numerous supporters and majority of Imolites who put their lives on the line to cast their votes for us, if we accept the outcome of this open robbery orchestrated by the People's Democratic Party with the full connivance of the Independent National Electoral Commission and some of its ad-hoc staff.
8. Even with the declared illegal results, Emeka Ihedioha did not meet the requirements stipulated in the 1999 Constitution of the Federal Republic of Nigeria (as Amended). The legal thing to have done was for INEC to arrange for a run-off election between the two leading candidates; Ugwumba Uche Nwosu and Chief Emeka Ihedioha. This clear Constitutional provision was ignored by the Returning Officer who went ahead to declare Emeka Ihedioha winner of the election against the principles of the law and good conscience.
9. In a few days from now, we shall be inaugurating a legal team that shall ensure that our mandate is retrieved from the current illegitimate holders.
10. We thank Imolites for their support and votes which clearly gave us victory in that election, as we urge them to remain resolute, yet peaceful, as the current illegality will be nullified and their mandate to us, recovered.
Signed,
Onwuasoanya FCC Jones
Director, Media and Publicity
Ugwumba Uche Nwosu Campaign Organization.
12th March, 2019."