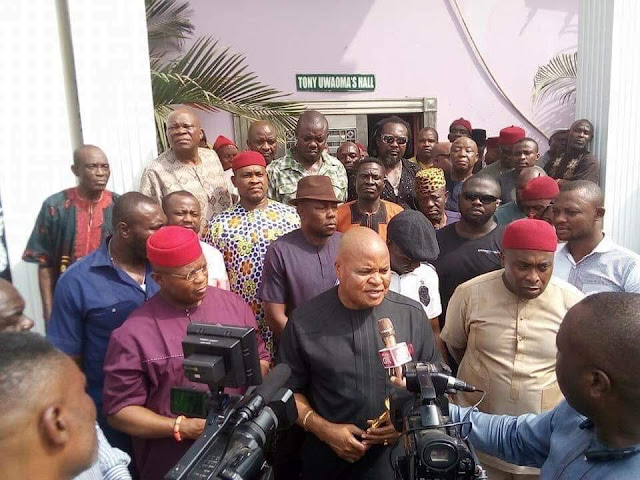 
The Imo State chapter of the All Progressives Grand Alliance (APGA) has rejected the results of the governorship election as announced by the Independent National Electoral Commission (INEC).
The candidate of the People’s Democratic Party (PDP), Emeka Ihedioha was declared governor-elect by the Returning Officer, Prof. Francis Otunta.
But APGA in a statement signed by its state secretary, Eberendu Alphonsus, said that the PDP candidate failed to meet the constitutional requirements of 25% of total votes cast in 2/3 of the 27 Local Government Areas in the State.
The party therefore called for the total cancellation of the election, stating that “it is absolutely unconstitutional to declare a candidate that did not meet with the Constitutional requirement as winner”.
It also accused of complicity in the irregularities that marred the election, especially by accepting the results from the three Local Government Areas of Aboh Mbaise, Ahiazu Mbaise and Ezinihitte, which the party noted were heavily manipulated.
According to the statement, “many INEC officials were compromised and made themselves available for manipulation and doctoring of genuine results in favour of the PDP. The open complicity of INEC officials in the electoral fraud that marred the election, even made the State Returning Officer order the arrest of some of these officials.
“We state without equivocation that this election failed to meet with all known standards in civilised democracy. The substantial noncompliance with the Electoral Act by INEC in the conduct of this election makes it imperative that it should be cancelled. This is the only way to ensure peace and justice in the State”.