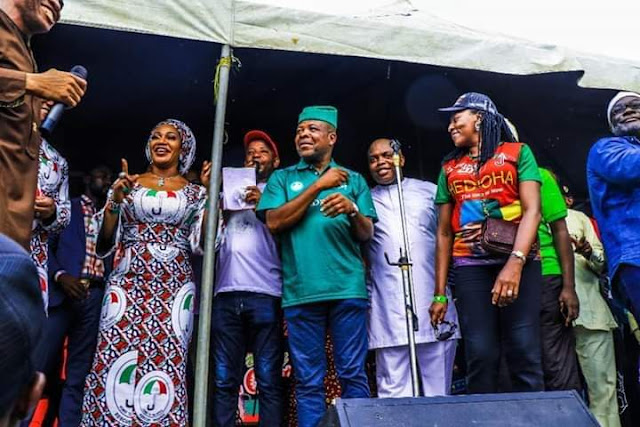 The Peoples Democratic Party Governorship candidate in Imo State, Emeka Ihedioha, has taken the lead in the results from the 11 local government areas so far declared by the state Returning Officer, Prof. Francis Otunta.
The former deputy speaker, House of Representatives, is leading other candidates with over 70,000 votes, having polled 128,732 votes.
His closest rival, Uche Nwosu of Action Alliance, had so far scored 66,852 followed by Senator Ifeanyi Ararume of the All Progressives Congress Grand Alliance who scored 37,107.
The All Progressives Congress candidate, Senator Hope Uzodimma has polled 27,331 while the Accord Party candidate, Ihedi Ohakim scored 2,047.
The result declaration was disrupted at 5 am this morning by the PDP agent, Uche Onyeagocha, the Special Adviser to Governor Rochas Okorocha of Imo State on Electoral Matters, Steve Asinobi, and his associate, Paschal Onwukaike.
Their action followed the opposition of the PDP agent to the declaration of the results for Ideato South Local Government Area.
The PDP agent said no other party agent apart from that of the AA signed the result for Ideato South LGA where he alleged that Imo State Governor Rochas Okorocha’s agents chased out all party agents and switched the election results.
Onyeagocha queried the authentication of the results, insisting that the result should not be presented.
He said the party had submitted a petition to the Resident Electoral Commissioner, Prof. Francis Ezeonu, immediately the incident happened, noting that the REC confirmed the development from the returning officer for the local government.