RIVERS, OGUN, ZAMFARA AND THE POLITIC OF OKOROCHA'S PERFECT ALLIANCE 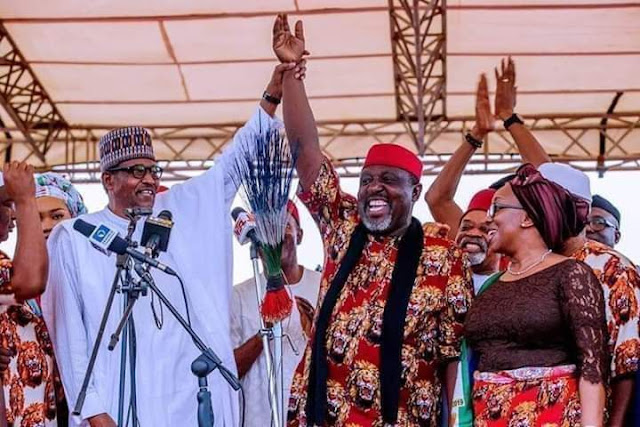 Few hours ago, a panel of the Nigerian Supreme Court led by Justice Aliyu Sanusi drilled the final into the coffin of Rivers State APC, as long as the 2019 elections are concerned. I commented somewhere last week that the optimism or even faith of the Amachree/Amaechi led APC faction in Rivers State is the most frenzied, extreme and unusual I have seen and even my Pentecostal brethren may need to learn from them. There is no critical observer of politics who would be surprised at this outcome. That Amaechi, Oshiomhole and their co-travelers in the new found reckless political impunity ravaging the APC at the moment could retain the slightest hope that there would have been a different outcome gives us a peek into the dark mindset of these individuals, who ironically are among the biggest beneficiaries of democratic rule, but the champions of its derailment. I will not argue with those who insist that Amaechi and his gang of democracy rapists and over ambitious power mongers may have a hand in the current persecution of the Nigerian judiciary. Did they think that they could somehow intimidate these  Supreme Court Justices into cowardice? And I heard Rotimi Amaechi was a lawyer! Of course, having forgotten the most basic principles in the legal confraternity, it is safe to regard him as a former lawyer and a practicing  or wannabe dictator. Amaechi, Oshiomhole and their recruits and sponsors will be held responsible should President Muhammadu Buhari fail to have an easy ride to his second term victory this Saturday. For those who may be confused, the implication of this court judgement goes beyond APC not having a candidate in this election, it also means that most APC supporters will not be coming out to vote for President Muhammadu Buhari on the 16th of this month. For them, they have got nothing to lose or gain. In the real sense of it, Alhaji Atiku Abubakar is the ultimate beneficiary of this court judgement, as he will not only be winning Rivers State but should win it in commanding style.

Had Direct primaries been conducted in Rivers State as proposed by Senator Magnus Abe, Rivers State APC  wouldn't have been in the mess it is at the moment. However, Adams Oshiomhole seemed to have sold off States to different people and power blocs without thinking about the far-reaching implications of his actions, it could also be that he was more interested in annexing some of these States for his laughable ambition of with becoming the next President of Nigeria or producing whoever will be. APC candidates in Kwara State still retains some faith that their nomination will not be quashed by the courts because the benefiting leaders of the Party in that State took the wise path by choosing the direct primaries option. Honorable Minister Rotimi Amaechi was blinded by power or desperation for it that he did not give thoughts to any other ideas outside the ones that came from him. He should learn from the leadership ideas and styles of Governor Rochas Okorocha who is always ready to shift grounds for the common interest. For instance, Governor Okorocha wanted indirect primaries in Imo State but had to accept the option of Direct Primaries when the other group in the Party gave it is an option for peace to reign in the State APC. Owelle's followers won that direct primaries as the other group had and still has no footing in the grassroots.

In Zamfara State, the ruling Party also does not have any candidate. At least, by INEC's stance and communications to that effect. While Governor Yari, who incidentally is the Chairman of the Nigerian Governors' Forum is anxious to have APC candidates feature in the election and has even gone ahead to campaign for the Party in some parts of the State, Senator Marafa working in cahoots with Adams Oshiomhole and the cabal of capons ruining the APC, is behaving like the barren and embittered woman in the Bible who asked that a baby she stole from her neighbour be cut in pieces instead of allowing the real mother have the baby. It is ridiculous rather than curious that a putative national chairman of a Party has no scruples about his Party not fielding candidates in some parts of the country, especially, in areas where they have sitting governors and therefore enjoy an advantage of winning the most votes in a free and fair election. Senator Marafa, who is a known Adams Oshiomhole acolyte goes to court to support any suit seeking to disqualify a Party he claims to belong to, from fielding candidates in a general election and Adams Oshiomhole pats his back. For what really? For destroying the Party and reducing its chances in an election as competitive as the one coming up in a few days time.

Yesterday in Ogun State, Governor Amosun watched as his supporters pelted President Muhammadu Buhari with stones, eggs and water. Even though these stones, eggs and jeers were obviously targeted at Oshiomhole and his acolytes in the demolition of APC in Ogun State, it is inexcusable that such a thing could be allowed to take place in the presence of the President of the Federal Republic of Nigeria. In taking any action, especially, when an election is this close, we should think about how the opposition and media may twist it to gain some miles in the political race.We must avoid equipping our opponents with weapons to hit us with.

While there is no doubt that the APC primaries conducted by Adams Oshiomhole led National Working Committee of the APC is  the most corrupt, most brazen and most ridiculous, but there is no State where the robbery was more pronounced and more disheartening than in Imo State, where the world did not have to wait to be told the story by second parties, but followed events as they unfolded. So, if there is any State where the unfortunate incident in Ogun State should be expected, it is Imo State. Truly, it only took the insistence and deliberate supervision of Governor Rochas Okorocha for a more embarrassing scenario to have been averted. Party members and even ordinary citizens of the State were clearly angry and ready to get their pound of flesh from Oshiomhole, but Governor Rochas Okorocha gave stern warnings against such and threatened to sanction anyone who behaved irresponsibly. The governor did not take these steps to stop outbreak of violence or any form of crisis, because he was happy about what happened , but because he cares about the safety of the people, he has enormous respect for President Muhammadu Buhari and and will d will do anything to ensure that the President is not disrespected, he is also a true Party man and a very sagacious leader who sees beyond the surface.

Ogun, Zamfara, Rivers are not the only States with controversies ravaging the APC and the nomination processes. If all those who were cheated by Oshiomhole and his gang of democratic felons should diligently prosecute their cases in court, then, I will not be surprised if more than fifty percent of those assumed to be candidates of the APC across the country are eventually sacked by the courts. The APC primaries superintended by Oshiomhole is the most brazen robbery of democratic mandate I have witnessed in my entire life or have read of anywhere. Already, the governorship candidates of the APC in Cross Rivers State, Enugu, Abia and Delta States have been sacked by the courts. Also, 90% of APC candidates are facing one litigation or the other in court.

Governor Okorocha is always known for introducing new ideas and new words into our political and even grammatical lexicon, but the most apt in recent times is his coinage of Perfect Alliance in explaining the association between the Action Alliance (AA) and the All Progressives Congress (APC) in the State. Every attempt was made by the Oshiomhole gang to scuttle this arrangement  but Governor Okorocha pushed it through, not just as a maverick that he is but as a man after God's and the masses' heart. The original idea was to push the governor away from the APC or force him to accept the illegality and injustice meted out to APC members in the State. The governor knew that accepting such treatment would have alienated hundreds of thousands of voters who are diehards of Ugwumba Uche Nwosu, thereby exposing President Buhari to a possible defeat in Imo State. In essence, the Perfect Alliance arrangement is actually as much beneficial to the President as it is the governor. If there was no such arrangement, the President would have lost the votes of thousands of fanatical supporters who may either boycott the elections if Ugwumba Uche Nwosu was not on the ballot or gone the other way if there was no arrangement to convince Uche Nwosu's teeming supporters that their support would be appreciated.