PICK UP YOUR PVC, VOTE OUT BAD GOVERNMENT - ARARAUME 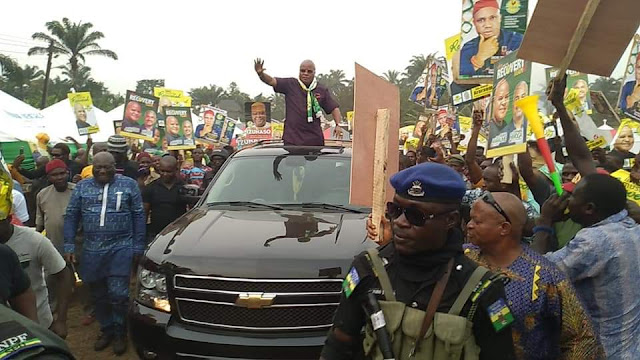 The governorship candidate of the All progressives Grand Alliance Distinguished Senator Ifeanyi Araraume has once again reiterated his resolve to appoint a physically challenge as a member of the state Executive council  in his government if voted into power.
He disclosed this when his Recovery Team berthed Abubu Amiri  Oru East Local Government Council.

He decried the level of falsehood been spread by the APC government in lmo State led by Rochas Okorocha. He cited the case of the unfinished  Hospital project which on the Television and Internet is telecast  as a concluded project by the present  government and asked the  people  of Oru East to take on the spot  assessment of the hospital project which has taken the APC government in lmo state 8years yet not concluded. He promised that APGA government  will rehabilitate the  bad roads within Oru East. He challenged the youths to vote massively for all APGA candidates at all levels in the forth coming  general election  as he assured  that 50%of his appointment will be ceded to the youths.

At Orsu LGA he promised, of the three skill acquisition centers to be built in the three senatorial zones, one will be built in orsu LGA, as his government will build  standard road network  which will be awarded to Julius Berger. Interest free loans will be provided to traders and market women to assist them in their business. He urged all eligible voters who are yet to collect their pvc's to ensure that they pick them as Friday 8th February is the last date given by INEC for the collection.

Also in her speech the wife of the All progressives Grand Alliance governorship candidate Barrister Lady Gladys Araraume thanked the people of Orsu for their show of tremendous support to APGA, she donated a wheelchair to a physically challenged young man whose condition is so pitiable at the campaign ground. Lady Gladys who stated that she is at home at orsu as she is From orsu but married out to Senator Ifeanyi Araraume from Isiala Mbano LGA. she further  assured  the mammoth crowd  that APGA government will not disappoint them like the APC government in lmo but will double  the giant strides  which APGA government in Anambra led by Willie Obiano has achieved.

The APGA senatorial candidate for orlu zone senator osita Izunaso while speaking  emphasized the need for the electorate to vote out the bad government in lmo as they have nothing to offer.
Posted by IfeanyiCy Njoku
Labels: News