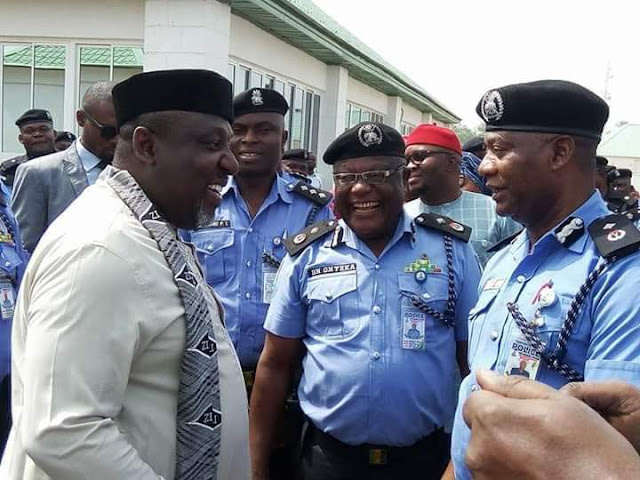 Rochas Okorocha, Imo state governor
Rochas Okorocha, Imo state governor
Sunday night’s melodrama snowballed into a full-blown controversy Monday morning when the returning officer for Imo West Senatorial District, Innocent Ibeabuchi, said he was “detained at the centre for days.”
He said this while announcing the results of the senatorial election for the zone.
Before reeling out figures at the district collation centre in the Independent Electoral Commission (INEC) Office in Orlu, Mr Ibeabuchi, a professor, said he was being held “under duress” to announce the results.
“My name is Ibeabuchi Izuchukwu Innocent, a professor at the Federal University of Technology Owerri (FUTO), the returning officer for Imo West (Orlu) senatorial zone”, the official said.
“My area commander; my P.Os; the party agents here present; members of the press; ladies and gentlemen.
“I have been held hostage here for days so I’m trying to ease off and take my life home back to my children and for the sake of that I am calling these results under duress,” the returning officer said.
He then reeled out the results.
The Drama
After announcing nine out of 12 local government areas that made up the zone, Mr Ibeabuchi paused. The time was 9:45 p.m Sunday.
Three LGA results were being awaited to finalise results for Imo west district. They are Oru West, Ugwuta and Orlu.
The outgoing governor of the state, Rocha Okorocha who ran under the All Progressives Congress (APC) won in eight of the nine local governments announced earlier.
Mr Ibeabuchi said he received an urgent call from the state’s Resident Electoral Commission (REC), Francis Ezeonu, to return to Owerri and continue the process Monday morning.
But Mr Okorocha’s supporters insisted the returning officer “must complete” the announcement, “otherwise, he is not going anywhere.”
They blocked the professor from leaving the building. They refused to yield even when police officers intervened.
For hours, the APC agents who initially hauled verbal threats at the returning officer resorted to pleading. But Mr Ibeabuchi stuck to his guns.
He remained unmoved even after Mr Okorocha and his closest rival, Jones Onyeriri of the Peoples Democratic Party visited the centre at different intervals Monday morning.
Mr Ibeabuchi would later yield and declared Mr Okorocha winner of the election. He said the governor polled 97,762 votes while Mr Onyeriri returned second with 63,117 votes.
Mr Okorocha’s old rival and a former senator, Osita Izunaso, came third with 30,932 votes.
What happened?
It was not immediately clear why Mr Ibeabuchi initially refused to announce the remaining results on Sunday night but later did on Monday “under duress.”
When contacted, INEC spokesperson in the state, Emmanuella Opara, said the commission was following the development and had sent security personnel to bring Mr Ibeabuchi to Owerri.
“Let him come back here with his report and tell us what happened.”
Mr Onyeriri, who is a sitting member of the House of Representatives, later alleged that the returning officer was held hostage throughout the night by Mr Okorocha’s supporters after a directive from the REC to “stop the collation and return to Owerri.”
He said Mr Ibeabuchi stopped the process after observing “the whole results were rigged and inflated in favour” of the outgoing governor.
“Throughout the night, they used several means to compel the returning officer to go ahead with the wrong results.”
He further described elections in the zone as heavily rigged by Mr Okorocha, saying he would not accept the results.
“In Ideeato South, he brought all collation officers to his house and compelled them to write results on his behalf. The number turned out was far behind the number captured by smartcard reader.
“He also colluded with some RAC techs to make the smart card readers not to work to enable him to do normal registration, hence inflation of voters.
“I want that results to be changed because I will not accept them. I am the actual winner. In law, if the returning officer says he can no longer continue, you cannot force him.”
The election was adjudged by observers and participants to be fraught with irregularities such as ballot snatching, invasion of polling units and harassment of voters by thugs.
Shortly before the governor’s arrival, PREMIUM TIMES reported how a journalist, duly accredited to cover the polls, was harassed and briefly detained by the thugs in Mr Okorocha’s polling unit at about 10:14 am.
This happened in the presence of two female police officers at the centre. 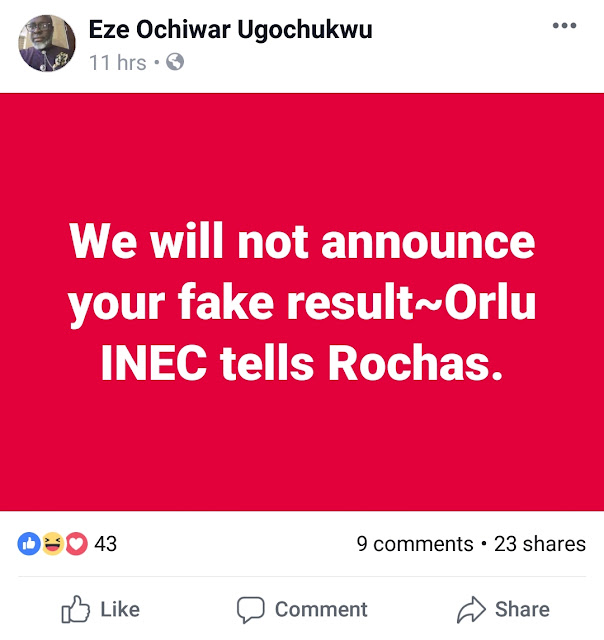 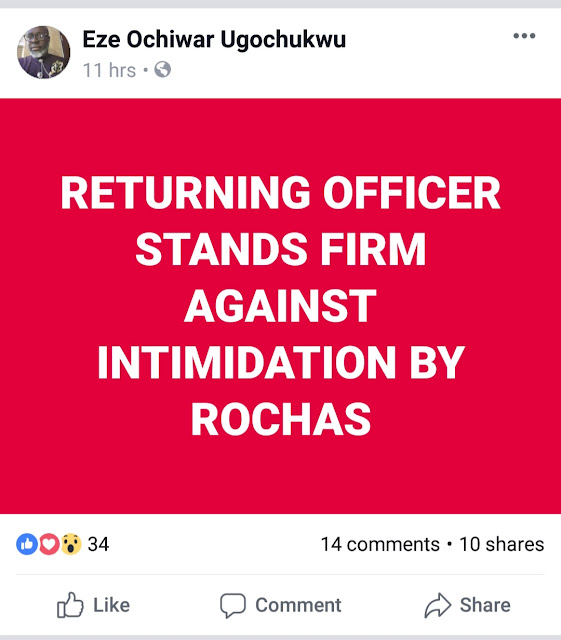 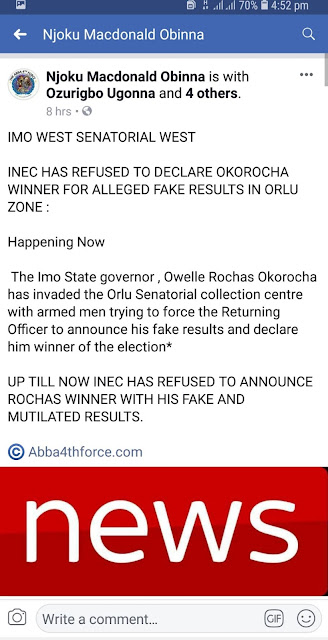 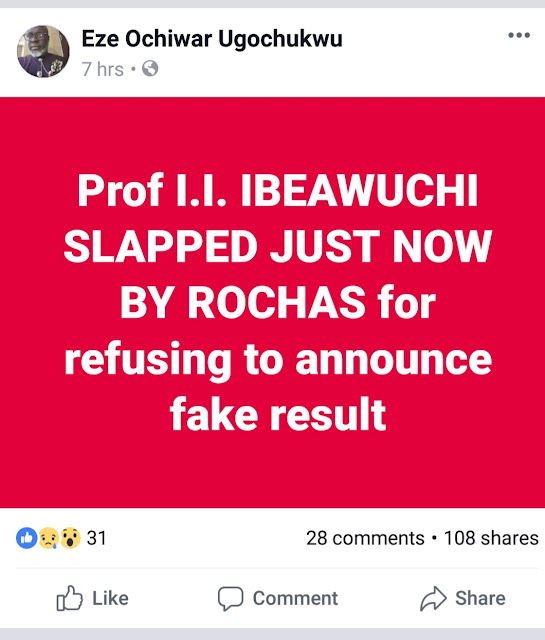 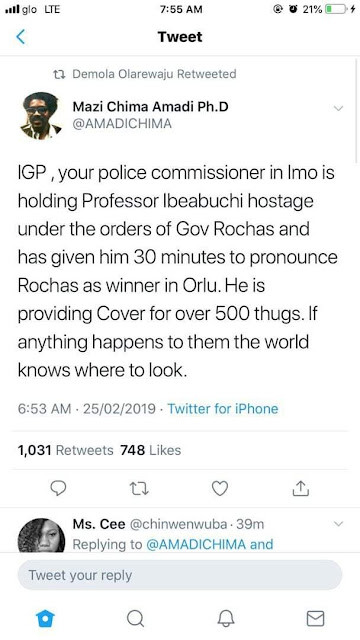 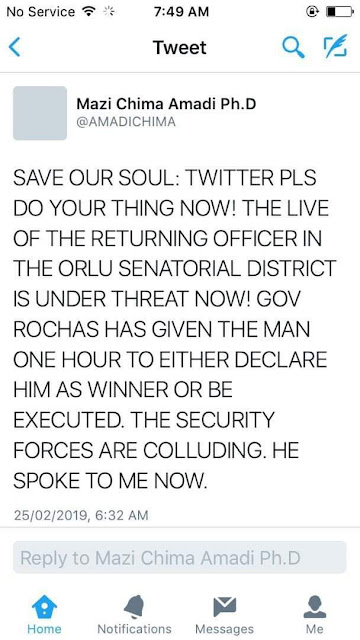