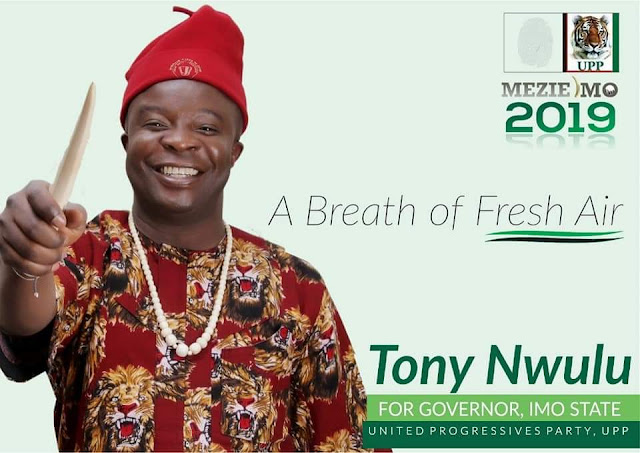 Purveyors of falsehood are at work again. The most recent is a publication in Nigeria Newspoint wherein it was alleged that Hon. Nwulu will compromise the mandate bestowed on him by teeming members of the UPP.

The report is nothing but a figment of the imagination of the writer and another bundle of lies from the pit of hell peddled by desperate politicians.

To set the records straight, Hon Tony Nwulu, the UPP governorship candidate in Imo State has no intentions whatsoever  to compromise the mandate of the party willingly and freely bestowed on him by thousands of UPP members in Imo State.

It is important to state that  Nwulu is a true believer for a new order in Imo State where the lives of the citizenry will be better and enhanced than the present  hunger and impoverishment ravaging the good people of Imo State.


Hon. Nwulu has outlined a comprehensive socio economic roadmap that will restore the glory of Imo State which has been battered in the last twenty years and he will never compromise such noble initiatives  for a pot of porridge or for filthy lucre.

It is important to state that the recent adoption of President Buhari by the national leadership of the UPP led by the indefatigable National Chairman, Chekwas Okorie, was motivated by the conviction that Buhari is the best among others aspiring to lead the country in 2019.

However, the UPP being a political party that has the socio economic and political interest of Igbos at heart deemed it necessary to endorse Buhari in 2019 as a basis for an Igbo to become Nigeria's President in 2023.

It is very clear that only Buhari 's second term in 2019 is the pathway for Igbos to be on the saddle of governance of the nation in 2023 since other geo political zones have one time or the other occupied the presidency.

These were the strong points that shaped and influenced the adoption of President Buhari's second term by the UPP. It has nothing to do with Hon.Tony Nwulu trading off the governorship ticket of the UPP for any other candidate of any political party in Imo State.

Certainly, we believe that those peddling these falsehood against Hon. Nwulu and the UPP in Imo State are those singing their loss song even before the governorship election in Imo State in 2019.

As merchants of deceit, they are scared of the rising political profile and overwhelming  acceptance of the candidature of Hon.Tony Nwulu by millions of Imolites who have come to embrace a new order which Nwulu truly propagates and  represents.

These elements who have been rejected by Imolites know they stand no opportunity to hoodwink and deceive the sophisticated Imo electorate anymore moreso now that they have resolved to embrace Hon.Nwulu's  "Roadmap to Restoration" that will take  Imo State away from the valley of despair and hopelessness to the mountain of prosperity.

Tony Nwulu cannot be compromised. Therefore those  who are in the business of cheap blackmail should look elsewhere.