Menu
Home » Politics » 'OSHIOMHOLE FRUSTRATING MY AMBITION, I WILL NOT LEAVE APC, I STILL REMAIN THE AUTHENTIC CANDIDATE OF THE PARTY' -- UCHE NWOSU

'OSHIOMHOLE FRUSTRATING MY AMBITION, I WILL NOT LEAVE APC, I STILL REMAIN THE AUTHENTIC CANDIDATE OF THE PARTY' -- UCHE NWOSU 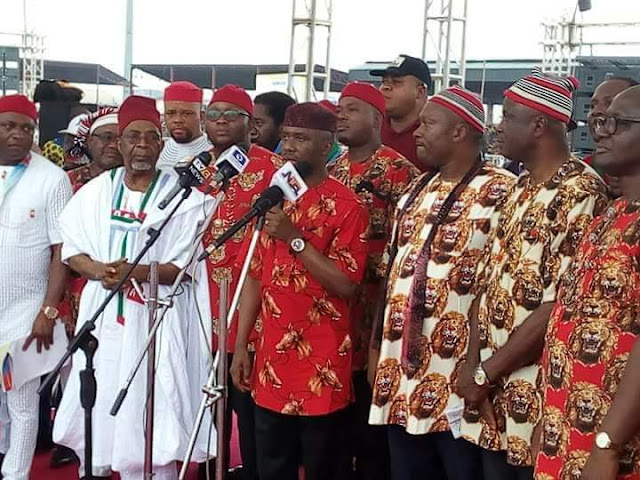 He said this while reacting  to the decision of the national working committee (NWC) of the ruling party to recognise Hope Uzodinma as the governorship candidate in the state.

Nwosu alleged that Oshiomhole was opposed to his governorship bid because his father-in-law picked up the senatorial ticket of Imo west.

He said Okorocha’s senatorial ambition ought not affect his own ambition since Oshiomhole influenced the emergence of his son as a lawmaker in Edo state and is still holding the chairmanship position.

He spoke with Ifeanyicy.com correspondence in Owerri, upon return from Abuja, the nation's capital.

“We are disappointed over Oshiomole’s action, his statements and antics did not give hope to young people who hitherto had always looked up to him,” he said.

“He is saying that Okorocha’s senatorial ambition scuttled my governorship bid… After all Oshiomole’s son is a member of the Edo state house of assembly, who he nominated and he is the chairman of the party.

“He is a man that is supposed to speak rightly and not deceive the people on air. I saw him on the television when he was talking from both sides of his mouth. It is a pity that APC could have such a man as its national chairman.”

Nwosu said it is unfortunate that Oshiomhole is the chairman of APC at a time when the party ought to “concentrate on winning the general election instead of being entangled in intra-party crisis”.

He insisted that he remains the authentic candidate of the party, saying his candidacy cannot be truncated by the national chairman or any other person.

“My mandate is still intact, I still remain the candidate of the APC, I am very much shocked with the national chairman who is speaking from the both sides of his mouth as a man of that age I thought he would have been upright,” he said.

“I am shocked that a man who has attained that age and who we should look up to as our role model has become somebody who many of us can no longer see as a role model again. I am shocked at the attitude of the national chairman which does not give hope to young people that mostly look up to him for years.

“So if they go anywhere and got another court order without knowing that there is a subsisting court order, then that must have been done in error.

“So the fact remains that I am the candidate of APC, it is just for a while and I will take up my mandate, I don’t have in mind to leave the mandate I already have for another party. My candidacy is secured and cannot be truncated by the national chairman or any other person.”
Posted by IfeanyiCy Njoku
Labels: Politics