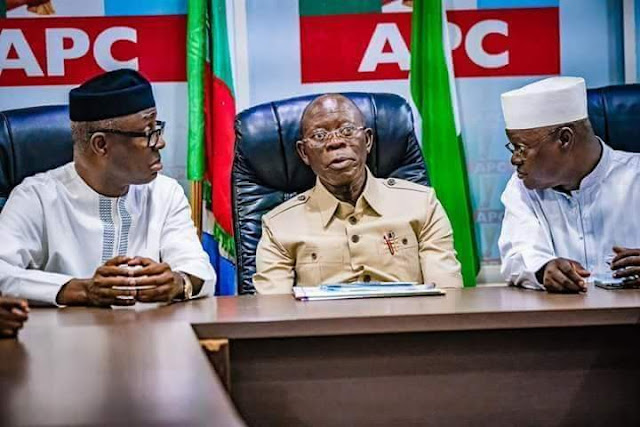 National Chairman of the All Progressives Congress (APC), Comrade Adams Oshiomhole, has apologised to the Christian community, especially the Catholic Church in Imo State, for the “sins” of the state governor, Owelle Rochas Okorocha.
Oshiomhole was however quick to add that the party should not be dragged into the problem of the governor with the Church in the state as it is the governor’s personal problem.
Oshiomhole, who spoke in Abuja, also said that the party will leverage on the past position of former President Olusegun Obasanjo on his former deputy to defeat the candidate of the PDP, Atiku Abubakar, in the 2019 elections
Oshiomhole also apologised to Archbishop Anthony Obinna of the Owerri Arch diocese and the entire Christian community in Imo State over what he described as the lack of respect exhibited to the church by Okorocha.
Oshiomhole stressed that “Governor Rochas Okorocha’s personal battle with the Christian community in Imo State is a matter between him and the Catholic Church. We in APC, we are not party to that. We do not want our party to be dragged into such contestation because it will not be helpful to us. Our road to power is election by the people, we cannot antagonise the people.
“Even the ordinary man in Imo is entitled to respect not to talk of the leaders of the Christian community. And so, we distance ourself from all of those things that Rochas has done which some times has been a source of huge embarrassment to our party which sometimes we have been able to manage in-house. So, I sincerely apologise to Bishop Obinna and Christians in Imo State.”
He said the party will utilise the allegations which bothers on the integrity of the former Vice President, made against him by his former boss, Obasanjo, in nailing Alhaji Atiku at the polls, adding that the former Vice President will be defeated by the APC.
He said “now that we know that our main opponent is Alhaji Atiku Abubakar, we will defeat him again the way we have defeated him before. And I am confident that President Muhammadu Buhari will return because he has a quality which none of them can boast of, which is integrity, integrity, integrity.
“To make statement about the others, we will just generate what former President Obasanjo has to say about Atiku and what Atiku has to say about Obasanjo.
“By the time we read it, you make up your mind if Nigeria is looking for a leader who they can trust, whether it is one with unquestionable integrity, or is the one that there are debates as to whether or not how much we can trust. I am confident that God will give us victory at the end of the day”.
While assuring Nigerians that the APC was at peace with itself, Oshiomhole said that “peace does not mean absence of some murmuring or grumbling. We are not looking for grave yard peace, we want functioning peace. People can have some arguments, some reservations but with time, it will heal.
“So, I want to assure all those who are genuinely aggrieved, I have a duty along with my colleagues in the NWC to work to heal wounds, for reconciliations.
“So, we are setting up various panels, groups of eminent leaders drawn from APC, statesmen and women within our party who we believe can help us to talk to all those who are aggrieved, so that we sort out all the grievances and approach the next coming election as a functioning party and by the special grace of God, we will win”.