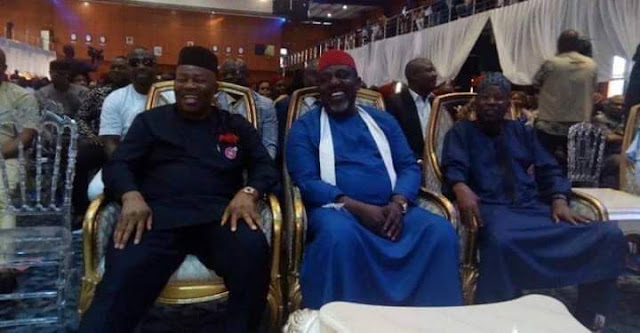 Imo state governor Rochas Okorocha  has said that the reason his rescue mission loyalist are still in the All Progressives Congress,(APC) is to consolidate on the journey they embarked in 2015 to save their face from public humiliation, not because of what they have benefitted from President Muhammadu Buhari.

Speaking during the visit of the  South East Peace and   Reconciliation  Committee of the party led  by Gov. Abdulahi, Okorocha  in lamentations stated  that "if there is any  injustice in the politics of Nigeria,Imo state is the headquarters".

" We run a family government in Imo state, the reason that you see this people here today is not because they've benefitted so much from Buhari's government, but because they don't want to end the Journey they started sometime in 2015 so that they people will not laugh at them".

According to Okorocha his disappointment in the party came from Adams Oshiomhole, whom he said he brought into the APC fold to become the National Chairman of the party.

" Our issue is not against the party or the National working committee the issue we have is with a single person who is called Oshiomhole, because he stole the mandate of the people.

Against all the speculations that I am leaving the party is not true. This people that you have nominated today are in the party not because of Buhari, and I make bold to say that in the next couple of months they will dump APC". Okorocha opined
Posted by IfeanyiCy Njoku
Labels: News