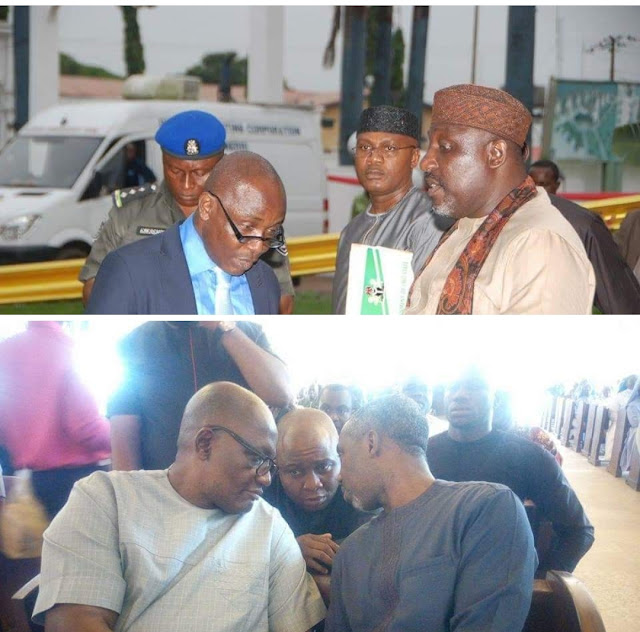 Chief Charles Amadi alias Chavon has only added fibre to the Contention that some of the people we see or regard as bigmen or rich men are in actual fact shoe-shiners. Or, menders of Old Shoes. We had at our expense over-estimated some of these people, and accorded them the kind of respect or honour they never deserved, as a matter of fact. Because we had erroneously believed that they were rich or wealthy, we call them bigmen. We have allowed them to lead us. We have also attended meetings in their houses against the backdrop that they are leaders of the people. And on the premise that something good or enticing or exemplary could come out from their side. In all these, we had misfired . Miscalculated. We had entered one-chance bus. In their Political merchandising, they used the rest of us to advance, negotiate and make their doo. At times, in hard currencies.

The gods are not to blame. But, we. Real bigmen or richmen do not allow their lives to be defined by Political opportunities or naira. They do not get glued to naira and kobo. If Rochas Okorocha had been Conscious of the Politics of the man he would have kept him at arms length. He would have decided to eat with him with long spoon or not eating with him at all. The Chief has a history. Worrisome history, for that matter. The dirty tale of unsteadiness. Very unstable and instable. He does not believe in anything. Featherweight. Political balloon. Or kite, we were using to do “aeroplane” when we were kids. It was “technology” at its best. You bring polytene bag or “water-proof”, bring broom stick and long trade, you construct one. With air, it would go up. But it carried no weight.

Chief Charles Amadi, leaving the Rescue Mission Administration and Uche Nwosu in particular and when it matters most, and forty-eight hours after Adams Oshiomhole had announced Hope Uzodinma as his preferred governorship Candidate for Imo State APC, was never surprising to those who know his story. He has been like that. And he cannot live differently. To him, it is a way of life. And he feels there is nothing bad about that. He enjoys it. And he owes no one any explanation. At meetings in his house for Owerri Zone APC members, he would sit at the Centre of the table as the apex leader. Hillary Ekeh would be by his left hand side. George Eche as the Secretary to the Government of Imo State, SGI then, would sit by his right hand side. And they would be telling us the need to remain where we are. The need to remain steadfast, faithful, committed and what have you. And for us, leaders were talking to their lieutenants. Unfortunately, those who were preaching steadfastness, etal, were the first set to vamoose.

A leader or Commander who takes to his heel when the “war” gets hotter is an accidental leader or Commander. Fuck-up Commander, or “419” leader. Baba Ajasco. Iwere nkea irie nkea. Poor guys masquerading as rich elements. Ten million naira before them, they down tool. Real leaders of their people and real rich men maintain their ground or advance when the battle gets tougher, and when every hope appears to have been dashed. They remain firm, and raise their two middle fingers as sign of Victory. If the Commander runs away when the foot soldiers are still battle ready, he mocks himself. I extend my heartfelt sympathy to Chief Charles Amadi. I regret whatever I must have “eaten or chewed” in his house in the course of all the meetings. I had thought he could do things differently from what he did with OZOPOLF.

In case anyone has forgotten. Chief Amadi was the founder and leader of OZOPOLF – Owerri Zone Political Leaders’ Forum. He made too much noise with that organization. And also issued threats. OZOPOLF was to ensure that an Owerri Zone man or woman becomes the governor of the State in 2015. Few weeks to the governorship election of 2015, he fled like Ahmed Gulak. Abandoning his brain child OZOPOLF. Uptil now he has not told those who care to listen to him his reasons for deserting OZOPOLF. That action would have made Rochas Okorocha to be painstaking, or take heed of Chavon when he ran to the Rescue Mission government for accommodation. But Rochas, as most good men do, took Chavon as he saw him or as he came without taking cognizance of what he did with OZOPOLF. And now, he has acted in the same manner.

In other words, Chavon’s presence in the Rescue Mission outfit was predicated on the Success of Rochas installing a Successor so that he could Continue to stand or pose as a leader of men, women and materials when, in actual fact, he is not. He was not in the Rescue Mission enclave on Principle or Credo. Certain elements do not know what it means to be Principled or to have a Credo. They believe in cash and carry. Money for hand and back for ground. They are harlots in their own right. They see the world from the naira and kobo dimension. Their involvement in Politics is to make money and Continue to pose or parade as wealthy men or leaders. They are the heathens. And Psalm 115 described them to a large extent. Psalm 115:4-6 “Their idols are Silver and gold, the work of men’s hands. They have mouths, but they speak not; eyes have they, but they see not; they have ears, but they hear not; noses have they, but they smell not;”. That’s how they are. At the governor’s lodge, one would think Chavon was looking at Owelle without knowing that his eyes had gone to Omuma.

If you are asked on the face value to choose between Chief Charles Amadi and a Ward Chairman who has remained steadfast, I would opt for the Ward Chairman. There is no point choosing a “bigman” who cannot endure or who shakes or who cannot maintain his Position when the Chips are down. And Owelle had allowed him into strategic meetings thinking that he had a dependable ally without knowing he was arming a hidden opponent. At a point he told those of us from Owerri Zone to submit our membership registers to him and what he had in mind is also left for him and his god or God. There is gods that go with the small “g” and God that goes with big “G”. During the Primary, he had his own Candidate for the Senate against the popular Choice Emma Ojinere. Unknown to me he had drafted some APC leaders from Aboh Mbaise into that unholy deal. He didn’t bring me in because he knew I would have shot that plan down in his presence. When I finally got the hint, I called him to find out whether he was the one behind one Chima. He said no but any of them that wins in the field would become the Candidate. I told him, that was not the agreement. I then called the leaders from Aboh Mbaise he had Co-opted and warned them against dancing to the music of Chief Amadi. The full story will be told another day. Until those in Politics at all levels begin to believe and stand for something in their Politics men like Chavon will Continue to have their way. They will Continue to dominate the Political landscape.

One fact remains Catchy. That, at times, we over estimate some of these men. We lavishly add a lot of value to their real values or worths. I am yet to believe that Chief Amadi can win Councillorship election in his ward in Ikeduru without kneeling to beg his people to allow him win in his booth. The real leaders of their people are not the ones who own houses in Owerri. They are in the villages. They have no access to the Government House. And men like Chavon use them to shine. And owing to the opportunity he has as the one that attends leadership meetings in Owerri, he would go home to tell the people that the governor had asked him to nominate who would be this or that. And because his people see him sitting very close to the governor, they would believe whatever he tells them. That’s how they function and keep moving.

That Chavon deserted Uche Nwosu, Rochas Okorocha and the Rescue Mission family simply because Hope Uzodinma was named APC gubernatorial Candidate, is an alibi that he would have also sold out on the election day. These are not leaders of the people. They are hunters. Or gold diggers. They direct their garri or fufu to the side of the Soup where the fish is. They do not believe in bearing the cross. Someone was a rich man is not a palatable tribute. But he was a Courageous man or a great leader of his people, is an outstanding tribute. The Courage one adds to life is what makes it meaningful. Or, even more meaningful.

Chief Charles Amadi has literarily enrolled as one of the “Conspirators”. And in case you do not know, Conspirators plan their things. They arrive and leave in batches. They do neither come at the same time nor depart as a group or at the same time. That is their characteristics or modus operandi and modus Vevind. The earlier ones had departed. Then George Eche. And now Charles Amadi. I do not think that Chavon is the last to depart. There could be one other or more as the Political drama Continues. They do not love Hope Uzodinma. They want to be part of the government he will form in case he wins the governorship election. But once Chief Uzodinma fails they know what to do to also belong not minding what people would say. Their second name is “I don’t Care” Or Azu anu uka – Back does not hear words. Twenty aggressive supporters of Uche Nwosu in one Polling unit or booth worths more than fifty Chavons that cannot be counted “when the come finally comes to become”. Read my lips. “And the men which Moses sent to search the land, who returned and made all the Congregation to murmour by bringing up a slander upon the land. Even those men that did bring up the evil report upon the land died of plague…. But Joshua and Caleb lived” (Numbers 14:36-38).

Like I had earlier intoned. Conspirators do not arrive and quit or exit at the same time. In the case of Shakespeare’s Julius Caesar, Calpurnia entered first. Then Portia. Decius. Cicero. Cassius; Casca; Ligarius. Cinna. Then Brutus. But at the end of the Conspiracy, when the heat came upon them, Brutus said “the name of Cassius honours this Corruption”. Cassius responded “Chastisement”. Brutus said “Remember march, the ides of march, Remember:” Conspirators or betrayers do not go home with trophies. They hardly enjoy the fruits of their Conspiracy or betrayal. In George Orwell’s Animal Farm, one character SQUEALER is qualified to be the kinsman of Chavon and others. Who knows whether God is reducing the number of the so-called bigmen around Uche Nwosu so that he can prove that he is God. Reason being that with these bigmen around they will share the glory of Uche Nwosu’s Victory with God. And they must have left so that nobody would share the glory with God. The last batch of the godfathers. We shall Continue to clap for Jesus.