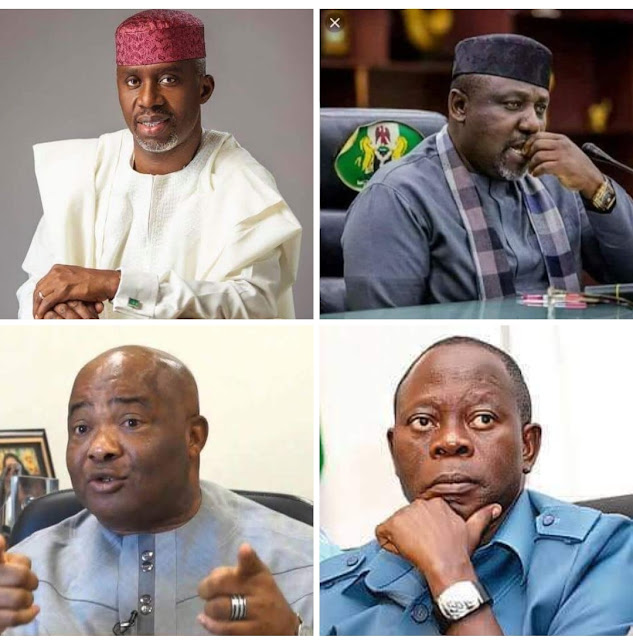 National Working Committee of the All Progressive Congress, NWC has upheld the result of the Ahmed Gulak Imo gubernatorial election committee conducted on the 1st of October, 2018 and therefore has submitted the name of Senator Hope Uzodinma as the candidate of APC in Imo State for the 2019 Imo governorship election to, Independent National Electoral Commission (INEC) .
According to a press conference by the National Working chairman of the All Progressive Congress, APC, Comrade Adams Oshiomole, monitored by Ifeanyicy.com, National Chairman of APC said, Governor Okorocha has brought shame and embarrassment to the the party and we can't continue to allow him kill the image of the party by his actions and words.
Oshiomole noted "we were not able to help him create a political dynasty in Imo State. He wants to create a political dynasty by installing his Son-in-law, Uche Nwosu as Governor after his eight years tenure and himself return to the Senate to represent Imo West Senatorial district. Its against the law of our party, its immoral and against the tenets of democracy. Governor Okorocha wants to create family political dynasty from his privileged position. Our constitution doesn't recognize emperor's."
He said "the chief judge of Imo State in his wisdom through a court order obtained by the Deputy Governor of Imo State, Prince Eze Madumere, directed me, the National chairman of APC not to have anything to do with the second governorship primaries conducted by Rtd General Agbabiyaka led Imo election panel. And I have complied by obeying the court order".
The National Chairman continued "Governor Rochas Okorocha is my friend, in also obeying court order, I rescued him in a congress conducted by my predecessor, Chief John Oyegun, which swept Okorocha completely out from having input or control over the party structure in Imo State. What I am not able to do for Governor Okorocha this time around is to assist him to create Rochas Okorocha political dynasty in Imo State, were Rochas Okorocha take the Imo West Senatorial District ticket for himself and his Son-in-law, Uche Nwosu takes Imo Governorship ticket of our great party with its slogan as change. The change of imposition and godfatherism starts with us at the party leadership and I will lead by example by ensuring that the right thing is done. I will not undermine the wishes of the Imo people who have rejected Governor Rochas Okorocha and his selfish ambition of creating a dynasty. Governor Okorocha has offended not only the members of the party in Imo alone but the catholic church. Everybody in Imo is against him and the party will not help him to be an emperor," the APC National Chairman Adams Oshiomole stated.