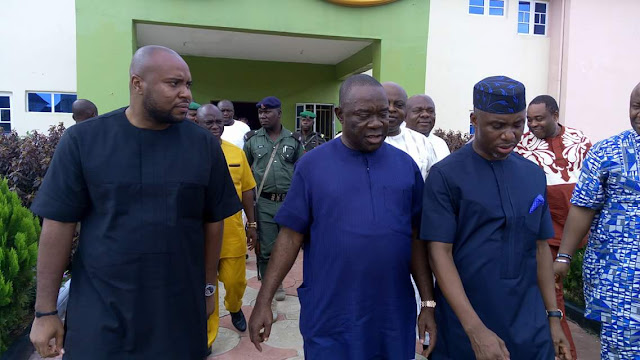 The embarrassments to Imo State, loss of relationships, unnecessary expenses that went down the drains and the emotional trauma that trailed the Imo Governorship contest in the All Progressive Congress (APC), would have been avoided if Governor Rochas Okorocha had listened to the wise counsel of his friend, Chief Tony Chukwu (Onweghi ihe Kariri Chineke).

The Mbano born reputable businessman had earlier mid-year, as a matter of friendly gesture, cautioned the governor to cease from imposing candidates on Imo people because according to him, 'we are not in Military Regime'.

Chukwu specifically advised Okorocha to apply caution in his bid to install Uche Nwosu as his successor against the wish of Imo people.

Assessing the fallout of the All Progressive Congress primaries, Ifeanyicy.com investigation revealed that soured relationship between two friendly persons and groups have been created in many areas.

It noted with regret that so much man hours were lost as governance and all combatants shifted base to Abuja to slug it out. Imo State image dropped sharply as it suddenly became the object of gossip and ridicule before people who ordinarily would have no business discussing the state in electronic and social media.

Besides, millions of resources from the combating groups were lost including those who traded off their personal estate just to raise money to stave off any financial embarrassments.

When contacted on his prediction which played out eventually, Chukwu said that he is still maintaining his stand on his earlier advice to the Governor. But on who wins the Imo governorship, he maintained that that is in the hands of God because according to him, only God can give power.

He spoke to Daily Nigerian Horn on telephone from his Dubai base where he has gone on business trip.

We serve you below verbatim our earlier publication published May 21, 2018 on the warning by Chief Tony Chukwu.

"Ehime-mbano strongman and All Progressives Congress (APC), major stakeholder Chief Tony Chukwu has finally opened up on the current crisis in the party.

"Chukwu popularly called "Onweghi ihe Kariri Chineke" who a few months ago promised to speak on the lingering political instability in the state after the lenten period allegedly opened up when he met with Imo State Governor, Rochas Okorocha at the Imo State Lodge, Abuja, the Federal capital.

"Sources at the meeting informed the Daily Nigerian Horn that the respected chief asked the Governor if he should speak to him as a friend or as governor which the governor opted for to the latter.

"Thereafter, Chukwu according to the source informed the governor that the manner and method through which he endorsed Uche Nwosu, his Chief of Staff preferred as APC governorship candidate come 2019 was wrong, saying not even in military regime was such practice done.

"According to the source, Chukwu informed governor Okorocha that the current crisis in the state is his responsibility stressing that the speed with which he endorsed Nwosu is enough to destroy the blossoming political carrier of the young man.

"He further informed the governor that his style and method of politics is the worst ever in the history of politics in Nigeria, stating that even President Muhammadu Buhari did not impose his wish in native Katsina state but allowed due process to flow.

"Chukwu according to the source further upbraided Okorocha that if truly he has the interest of Nwosu at heart, the method he employed has rendered the whole interest dead on arrival, insisting that the governor cannot impose his wish on stakeholders in Orlu, Okigwe and Owerri zones, even in his native Ideato, saying the governor can only talk about himself if he has any ambition.

The source however said, Chukwu told Okorocha that he still has room to make peace with Imo people before it is too late, saying imposition of aspirants or candidates cannot work in Imo State.

"The business mogul further informed the governor that the real essence of politics is to allow everyone of his aides to try their best on any aspirantion and not to stop anybody, saying by doing otherwise, the governor has succeeded in creating unnecessary tension in the state.

"To avoid further tension and possible bloodshed in the state, Chukwu according to our impeccable source, advised the governor to retrace his steps warning him that opposition within his party is only five percent of what he would witness in 2019 if this trend continues.

"This source told the Daily Nigerian Horn that some of the governor's aides who were in attendance at the parley were happy with the boldness which Chief Tony Chukwu approached the governor, saying others come to tell the governor what he wants to hear.