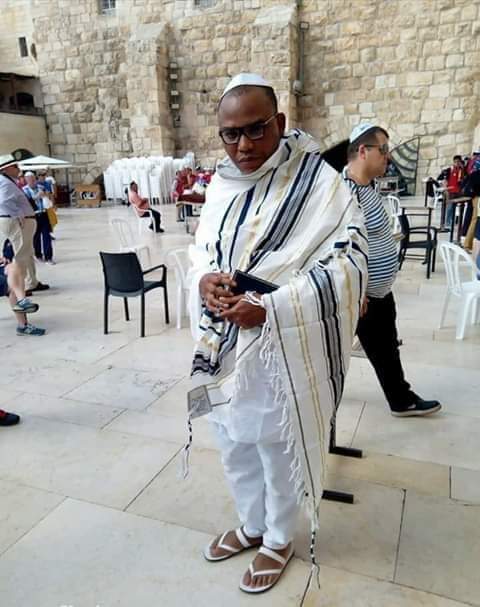 British authorities have briefed the Nigerian government about the temporary travel document they are about to issue to Nnamdi Kanu, leader of the Indigenous People of Biafra (IPOB).

The Biafra leader holds citizenship of Nigeria and UK.
According to information made available to Ifeanyicy.com, a top official of the ministry of foreign affairs, disclosed this in Abuja on Tuesday. He reportedly said the British authorities told Nigeria that they had no ulterior motive.
Radio Biafra had posted a video where Kanu was seen observing religious rites in Israel.
The IPOB leader, who was sighted in Israel last week, had pledged to return to Nigeria soon.
In his first address in 13 months, Kanu said: “I have returned full-time and I am coming home and I will bring hell with me.”
However, the presidency has dismissed Kanu’s outburst, assuring Nigerians that there is no reason to worry.
Garba Shehu, senior special assistant to the president on media and publicity, gave the assurance in a statement in Abuja on Tuesday.
“Instead, we see the re-enactment of his bizarre, episodic threat as a mere distraction which will not be allowed to detract from the existing cordial relationships between Nigeria and other countries,” he said.
He added that the Buhari administration is in constant touch with other friendly nations and has the best assurances that they would continue to reciprocate the respect Nigeria has for the sovereignty of their nations.
Posted by IfeanyiCy Njoku
Labels: News