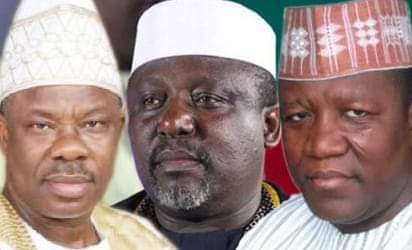 The national leader of the All Progressives Congress (APC), Mr Bola Ahmed Tinubu, says he is not in support of the calls for the removal of the Party’s Chairman, Adams Oshiomhole.

He said this on Wednesday while addressing journalists after he met with President Muhammadu Buhari at the Presidential Villa in Abuja.

Tinubu, therefore, appealed to aggrieved members to respect the party’s supremacy and channel their grievances through its appeal committee.

He said, “We all have to respect the party’s supremacy. “You were all here when we had the Congress and we elected the new executives. We had the convention.

“We surrendered to avoid conflict, to avoid domination and abuse of power.

“We surrendered our rights, all rights, to the National Working Committee headed by Adams Oshiomohole, that the NWC will set up electoral bodies to supervise various state congresses and elections. We signed up for it.

“So, if it is not in our individual favour, so be it. We gave three options: Consensus. Where there is no consensus because you are more than two or three and you cannot agree to one candidate, you go to the next level.

“Or the freest option, the less cumbersome is direct primary – you line up and count… 1,2,3.  If you win, you win and if you fail, go home.

The former Governor of Lagos State further stated that the party is not threatened by any move or meeting by the opposition party as he believes Nigeria will not go back to her past
Posted by IfeanyiCy Njoku
Labels: News