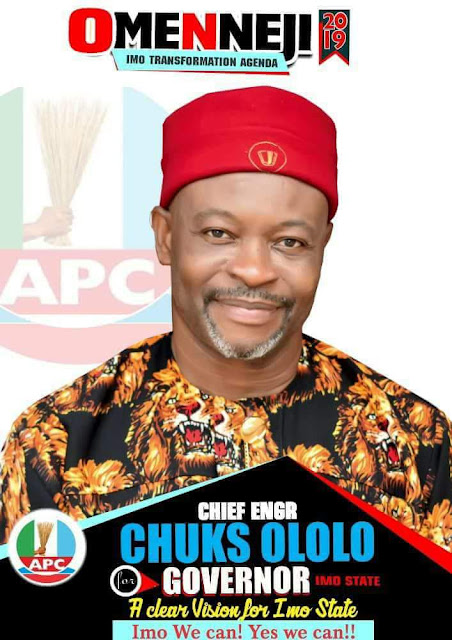 One of the governorship aspirants of the All Progressive Congress, APC in Imo State, Chief (Engr) Chuks Ololo, has spoken on the repeat guber primary of the party in Imo State held on Saturday, October 6, 2018.
Speaking to newsmen in Oweri, Ololo said he ordered his supporters to withdraw from the exercise when he observed that in some wards and local governments there were no officials and materials in sight.
According to him, he said there were also in some areas violence broke out.
Ololo who is Governor Rochas Okorocha brother in law, said as at 3pm those assigned to distribute the materials were unknown persons.
He however said he remains a member of the party and he has not backed out of the governorship race despite ongoing challenges undergone by the party.
Ololo added that whatever way the party resolves it’s issues, he will abide by it. He said he remains committed to the APC winning elections in Imo State and in the country but warned that he will not be party of a fraudulent process.
Posted by IfeanyiCy Njoku
Labels: Politics