Menu
Home » Politics » 'One Governor has Publicly said he will ensure that I am removed, that is fine'-- Says Oshiomole

'One Governor has Publicly said he will ensure that I am removed, that is fine'-- Says Oshiomole 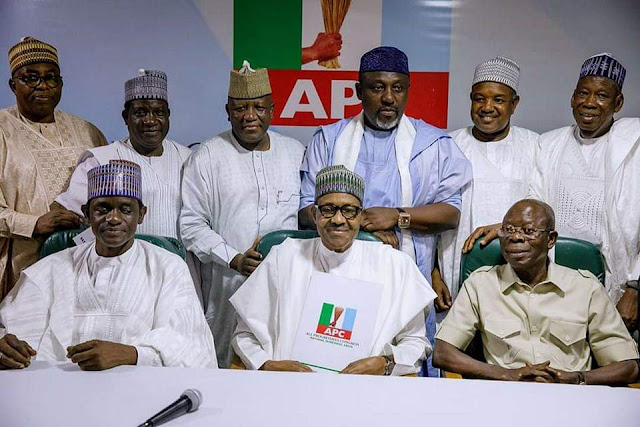 National Chairman of the All Progressives Congress (APC), Adams Oshiomhole yesterday said there is no cause for alarm on the speculated moves to remove him from office.
He told State House reporters after a delegation of APC politicians from Kwara State met with President Muhammadu Buhari.
Oshiomhole said apart from “one or two” out of the 23 APC governors, 90 per cent of APC members are happy with his leadership.
He said that those not happy with him were aggrieved because he insisted on following the due process.
He said he could not watch people with power suppress the powerless.
He said: “ I just want to clarify it that I have seen banner headlines, people are just calling me, there is crisis in APC, that my office is under threat, some APC persons are very angry and all that.
“I just want to say that this is my finest hour. I am being encouraged by the level of participation in our primaries and of course the more open, the more the democratic process is.
“Most people today who are actively involved in politics that we might describe as not too young to run, the only model that they have seen was the PDP model which ran for 16 years.
“So understandably, the culture of opposition, the culture of cheating, the culture of power determining outcome has been so well entrenched.
“And what we are trying to do under my leadership of the APC is to work consciously to entrench the core values of progressive politics which is that the people must necessarily lead, the members should not be distant spectators, the party members should be the drivers of this process.
“Yes we recognize power, yes we recognize protocol but at the end of the day, power must flow from the membership when it comes to primaries and it must flow from the Nigeria people when it comes to the popular election.”
“Somehow it has been my lot to be on the side of the oppressed whether that oppressed is a worker, whether is a senator or House of Reps, whoever you are that I think that my job is simply well cut out for me so that we uphold the rule of our party and the Electoral Act and the spirit of progressive politics and I think that I can say comfortably that about 90 per cent of APC members are happy, it is not possible to have 100 per cent.
“So, on the whole I am a very happy person, it has been quite challenging but I can say tough time doesn’t last, but tough people will always do. And I think we have been toughened by our history of struggle. And I’m humbled by the amount of support we are getting from critical stakeholders of the APC
“There maybe one or two governors who have issues and those issues can only be resolved democratically within the spirit, the letter and all the relevant provisions of APC Constitution, Electoral Guidelines and of course the Electoral Act.
“The Electoral Act is completely blind and our party rules too are completely blind to power that it is sensitive to procedures, it is sensitive to processes.
“The good news is that the overwhelming majority, we have about 23 governors, I think we are very much happy, I don’t have issues with anyone, only one or two may have some situation that they may want to see differently but that how the world is.
“It is not correct to suggest that there is a move, though, one governor has publicly said he will ensure that I am removed, that is fine, the beauty of democracy is any one or two could say something, but the majority is what matters.
“But I think even those two, when they have deeper reflection, they will recognize that all I have done is to stubbornly insist that the rules must be obeyed, nothing more, and nothing less.”
Also yesterday, media adviser to Oshiomhole denied been authorized to issue his statemt on Sunday whch indicated that some leads of the party were up in arms against the party leader.
In a statement he personally signed, Simon Egbebulem said the APC chair enjoys a cordial relationship with all stakeholders of the party.
Posted by IfeanyiCy Njoku
Labels: Politics