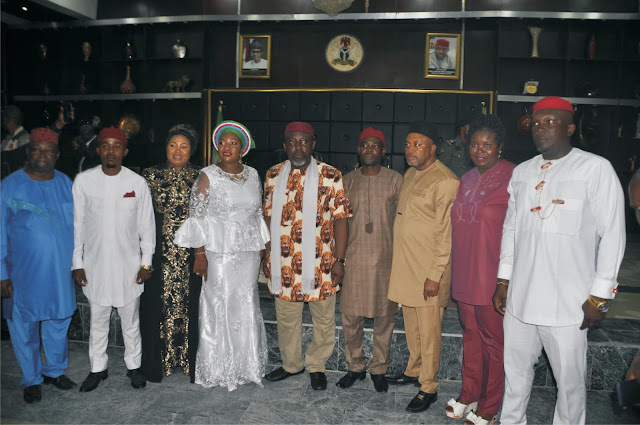 -SAYS N5B WOULD BE USED FOR THE PAYMENT OF PENSIONS

Governor Rochas Okorocha has disclosed that the State has received N12.6billion Paris Club refund and explained that N5billion of the money has been mapped out for the payment of Pensions, stating that Imo is a healthy State.
The governor also said that although the State is not owning workers any outstanding salary, N9billion will be set aside for the payment of salaries and informed that the State would now be paying salaries in advance. He said the government will source for fund to add to what remains of the Paris Club fund after removing the Pension money, to make-up the N9billion for the payment of salaries in advance.
The governor spoke weekend while swearing-in eight new Commissioners at the Sam Mbakwe EXCO Chambers, Government House, Owerri, explaining that the October and November salaries would be paid at the same time and that N2b has already been set aside for that purpose, while the State Government would inject N20billion into the economy of the State.
The governor also used the opportunity to call on the National working Committee (NWC) of All Progressives Congress, APC, led by Comrade Adams Oshiomhole to submit the name of Ugwumba Uche Nwosu who won the party’s first and second primaries, to INEC to protect the high integrity of President Muhammadu Buhari who is the leader of the party and the integrity of the Party.
His words, “This may be my last swearing-in of Commissioners before I exit as the governor of the State. But I assure you that I will exit strongly. For some time now, I have been in Abuja fighting for the soul of Imo State from possible kidnap and subsequent destruction by Political thieves. When a good leader is in Power, some people may not appreciate it until a bad one comes”.
He continued “May I announce to all of you that God is going to do a great thing for Imo State and that is why you can see the quality of people that have emerged in the parties. The Candidate of APGA, you can see he showed his nature in the way he emerged. When he came to APC, he came with the same manner but we chased him away and he went to APGA and destroyed APGA. This is their system. You see the one that emerged from PDP, it is also crisis, overturning and cheating. They don’t come from the right door but from the back door”.
He added, “The only hope left for Imo State now is for Uche Nwosu to emerge as a Candidate, if not there will be total economic catastrophe when I leave as governor. Though they have spoken falsely and badly about our Candidate but nobody could say that he did 419 in Lagos or that he was an armed robber in Benin or an arrogant man or a criminal. They have actually nothing to say about him except that he is my son-in-law.”
He charged the new Commissioners to live above board and work hard to contribute to the development and growth of the State and her people, while Mr. Sunny Chiadi who spoke on behalf of the new Commissioners assured that they would not disappoint the State and the governor who gave them the opportunity to serve the State as Commissioners.
The sworn-in Commissioners are; Mr. Sunny Chiadi (Market Development), Bonaventure Akwaiwu (Special Duties & Trade & Investment), Mrs. Esther Eburuche (Housing), Mr. Patrick Nze (Information), Lady Chinyere Uwandu (Environment), Mr. Kelechi Azike (Public Safety), Mrs. Edna Okorie (Gender Development), and Engr. Chika Ezeji (IGR & Pension Matters).
The governor also moved Lady Mrs. Ugochi Nnanna Okoro from the Ministry of Agriculture to the Finance Ministry.