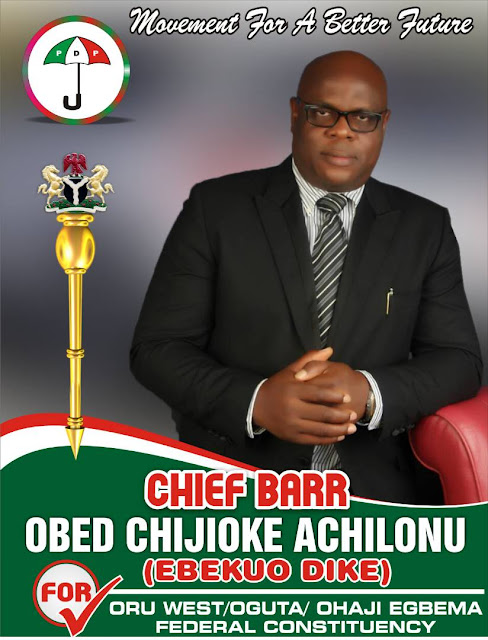 As part of his determination to add value to the lives of Oru West, Ohaji-Egbema and Oguta federal constituency indigenes, a philanthropist and renowned lawyer Barrister Obed Chijioke Achilonu has emerged successfully as the candidate of the Peoples Democratic Party, PDP after a keenly contested primaries election.

Barr. Achilonu, who was excited winning the ticket of the PDP disclosed that since the history of democracy , this is the only time somebody from Aji autonomous community in Oru West is contesting for any seat. He assured that Oru-West will represent the constituency very well and salvage the people of the constituency from the bad leadership.

He pointed out that, he had no interest in politics over the years because he really disliked the Nigerian style of politics, adding that he had no intention to contest for any position because the politics of the country does not portray the vision and ideology of which democracy stand for.

He described Nigeria politics as; cash and carry, kill and bury and winner takes it all, saying that these reasons put him off from politics. But he explained that after a long period of time he asked himself questions, about his efforts to correct the system that it was what motivated him to come out and make an impact no matter how small, so that posterity will remember his positive measures to correct a bad system.

He stressed that everything has absolutely gone wrong in the country and  that nothing is working, saying we don’t have leaders who have the people at heart, stressing that as big as Nigeria, people still lack important amenities and citizens of this country keep suffering. He therefore noted that the essence of his coming into politics is to put his little effort to ensure that the system is changed for good.

Barr. Achilonu, described himself as a youngman who has the capacity to win federal seat under PDP, promising to tackle the decay in the present living condition of the people of his constituency, assuring that if he wins the position of the federal House in the 2019 general election , it will be to continue his philanthropic gesture which he said he has been doing as a private individual, given people scholarship to university level. He also added that his agenda includes “to be the voice of the people, pass bills that will be meaningful to the citizenry, create job opportunities and also to create health programmes to uplift the health status of the people especially the old people in the area.

Congratulating Hon Achilonu, his friend and associate, Mr Chijioke Nwachukwu thanked the Peoples Democratic Party Delegates, party officials and faithfuls for their trust and confidence on his friend, Obed . He assured that Bar Achilonu whom he knew for along time will not disappoint rather would put smiles on the faces of his constituents.
Posted by IfeanyiCy Njoku