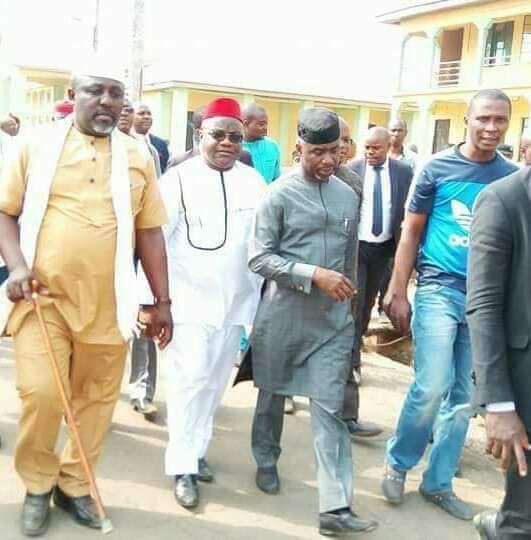 The raging battle of supremacy between Senator Hope Uzodinma and Rochas Okorocha on behalf of his son-in-law, Uche Nwosu over who flies the APC's gubernatorial flag in Imo has raised so much dusts that have refused to settle. While Senator Uzodinma ' s camp claims win of the highly coveted treasure, Okorocha's camp counterclaims and vice versa. This ugly situation has brought governance of the state to a standstill as the governor who has been so much embattled in the entire episode chose to relocate temporarily to Abuja which has become the theatre of the conflict. In other words, the state has been on autopilot and more so because the deputy governor, His Excellency, Prince Ezemadumere who is supposed to stand in is no more in good graces with the governor.

A journey into the retrospect cannot but call to the memory certain trenchant utterances made by the governor designating himself as the only cock that crows in the entire state of Imo. I mean a giant that has reduced every other heavyweight politician of repute to mere dwarfs and liliputians better described as inconsequential in political affairs and power brokerage in the state. Imolites cannot forget in a hurry such utterances ascribable to Owelle as "I have retired all the politicians in Imo", "I will make Uche Nwosu the governor of Imo State with the last drop of my blood" and many others. (Please Pardon any paraphrase in the quotes above).

By insightful analysis, it is deducible that "my governor, my governor" whose charisma could electrify any audience must have beat his chest in all conclusion that his pet project which is to produce a successor in his own son-in-law is sacrosanct, a forgone conclusion and a product of an irreversible reaction having tightened every loose end and stopped every loophole perfecting the formula that would birth the dream. Otherwise, I don't think anyone without the state on his palm or at least the reassurance would imagine such a lofty project that lacks taste, merit and popularity whose conception attracted unimaginable backlash let alone declaring it an end in waiting without recourse to counter plans that might arise to abort it.

And almost true to claims, his assertions began to play out accordingly. One couldn't have imagined that a fierce and much dreaded gladiator like Araraume could favour the option of quitting the APC for APGA after a hot battle for the control of the party structure in the state. The "retiree" of the Owelle political dynasty took that line of least resistance having seen that winning the gubernatorial ticket of Imo APC would be another herculean task that might bench him for the next four years as all odds began to favour "Hero the Hero". Hence nwa guy ejikwa nganga gbaara ehi oso o! (The smart one had to run from the bull tactically). In a similar vein, the governor took two dangerous swipes that left the deputy governor, Prince  Mmadumere and the national organising secretary, Senator Izunaso staggering with dizziness due to impeachment and defeat at the national convention respectively. While Mmadumere regained his balance after impeachment through court, Izunaso lost out and of course had to toe the line of Senator Araraume by joining APGA whose senatorial ticket for Orlu zone he clenched.

While the governor was gloating and basking in the euphoria of victory as the only emperor who decides who gets what, hope came the way of those aversed to his pet project as Senator Hope Uzodinma intercepted and hey presto clinched the coveted trophy. O wee tinyezie Eze ka Ibe na gbagharia ( Thus he took hold of the emperor's jugular and scrotum). For two weeks now and counting, the Imo seat of power has been relocated to Abuja for an elusive ticket. And back home in the state, Imo people have been polarised between the pro-Uche and pros-Uzodinma groups. Moreover,  the saga has assume a discourse of sort everywhere- at any clusters, inside the taxis, at newspaper stands and so on.

The media, both social and conventional are feeling the heat as well. The spheres have been so inundated and awash with conflicting reports that one could hardly identify those that are authentic. The social media being a free space accessible to every tom, duck and harry has been turned into the epicentre of unprofessional reports and petty press releases geared towards creating the impression of having upper hands. Amidst all these, pundits and analysts have been reading the thoughts and lips of the APC. 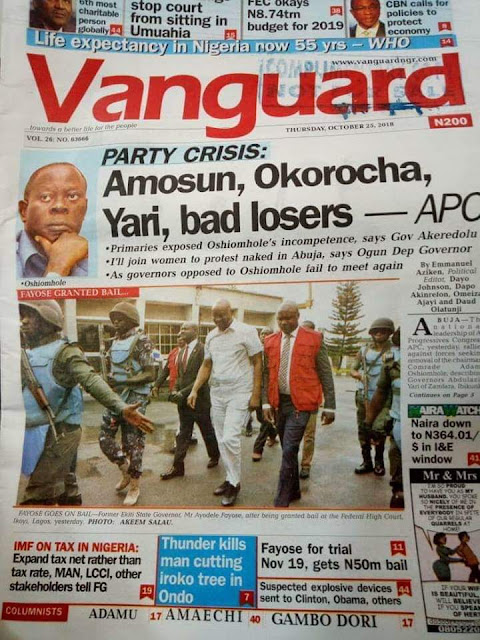 READING THE LIPS OF THE APC
From the look of things, it is becoming obvious that the battle is becoming a lost one to the self-acclaimed emperor. The thoughts, lips and body language of the ruling party and her national working committee seem to agree with the assertion. At first,  the faction of Imo APC loyal to the governor placed a demand for an indirect primary for the emergence of her governorship flag bearer. This demand however was turned down by her superior which recommended and insisted on a direct primary ostensibly to ensure the exercise would be done in the most credible and transparent manner. Isn't it any wonder that a heavyweight stakeholder in APC of Owelle's standing would have his request snubbed so coldly while favouring an option that was likely to Mar and spell doom to his chances? That was when the handwriting on the wall began to get clearer.

Moreover, after the exercise that produced Senator Hope Uzodinma as the Imo APC gubernatorial standard bearer, the court injunction allegedly sponsored by him restraining APC from conducting another APC gubernatorial primary in Imo and the counter exercise  from which Hon Uche Nwosu emerged for the same position in violation of the court order, Hon Uche Nwosu wrote an open letter of petition to the national chairman of APC, Comrade Adams Oshiomhole urging him to administer appropriate sanction on Uzodinma for dragging the party to court. The letter was signed by his media aid, Hon Nwadike Chikezie. By this letter, Hon Nwosu acknowledged that there was indeed an injunction issue by court against another governorship primary election after the one that produced Uzodinma. The lips of Imo APC by that indicated that all was not well with the camp of the governor regarding the controversial ticket.

That injunction from court restraining the October 6th gubernatorial primary was a masterstroke from the camp of Senator Hope which delt a massive devastation and earthquake to the territory of the emperor as it seems to render the exercise null and void. In fact it was reported that the party admitted to have erred by going ahead with the exercise without first and foremost vacating the injunction. What is the implication of the admittance if one may ask? Is it not an indictment on the credibility and legality of the exercise by APC? Read the lips and guess as I am doing!

The last straw that broke the camel's back is the publication on the front page of Vanguard newspaper today, Thursday, 25th October 2019. The national daily quoted the APC as saying that Governor Rocha Okorocha was a bad loser. According to the caption, "Amosun, Okorocha, Yari, bad losers-APC". Even a layman can read their lips in this regard. In a contest of this sort for a party ticket, there is no draw. You either win or lose. And you can't win and be addressed as a bad loser. You must be a looser first before being addressed as a bad one. The adjective "bad" comes in to qualify one comfirmed as a looser but can't manage his lose with sportsmanship.

Has the emperor lost the battle having been addressed as a loser by his own party? Do we still have any reason to believe any reports to the contrary? May be we should wait for court to deliver their final judgement on the matter. But the lips of the APC seems to have betrayed our governor. In any case, the survival of the onslaughts would better be described as a pyrrhic victory!