EMEKA IHEDIOHA VS SAMUEL ANYANWU :RE: SAMDADDY HAS A GOOD CASE 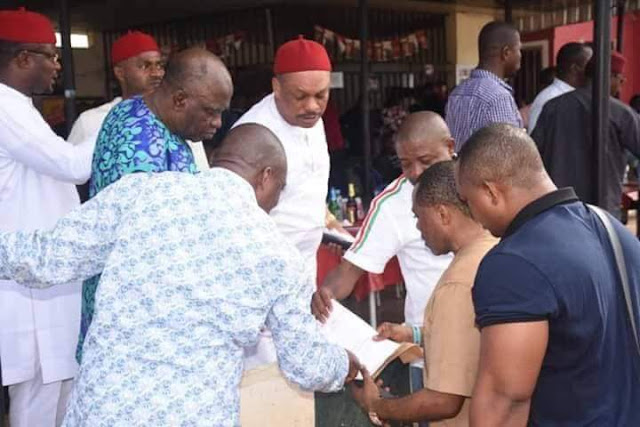 I decided not to comment on the recent happenings in the Imo PDP Because of my closeness to both gladiators. But I am constrained to do so now that the matter relates to Law and legal matters. In commenting also, I would be guided and advice Senator Samdaddy as I would have advised Rt. Hon. Emeka Ihedioha if he Samdaddy had defeated the later by even a single vote margin. I know how difficult it can be to lose, especially in this regard where there is no second place trophy. But we must allow common sense to prevail. That Senator Samdaddy participated from the start to the end of the polls and  polled over 1,200 votes at the primaries shows the polls was largely credible and substantially.

I have read in certain quarters where people opined that Senator Samdaddy Anyanwu has a very good case. And I ask how does Samdaddy have a good case? What makes Senator Samdaddy's case a good case? To break this suit down to A, B C, Senator Samdaddy's suit is challenging the entire result. In doing so, Senator Samdaddy is not asking that he be declared the winner. Far from it. Senator Samdaddy is seeking that the entire Primaries conducted on the 2nd day of October, 2018 be nullified and a fresh one ordered. The question is how? Is that a sincere demand going by the fact that the period INEC stipulated for Party primaries have elapsed and parties are now within the window of submission of candidates which shall also elapse in a mater of days? Another question is that if Samdaddy got the same results and Emeka Ihedioha with his own result, would he go to Court seeking nullification of an election victory of over 300 margin for reason of 80 votes in over voting?

As long as Senator Samdaddy is not seeking to be declared the winner and his name be submitted in place of Ihedioha, no reasonable and well meaning PDP member should see or expect that the suit would bring progress. Therefore unless there are some personal benefits derivable from the suit to Senator Samdaddy alone and not PDP at large, that suit is everything in bad for PDP and Imolites who hope on PDP as their brightest chance to Imo liberation. To me, the only benefit I believe anybody can derive from this suit is that it would bring all parties to a negotiation table or to rock the boat of PDP and benefit other parties. In all PDP has no benefit in this case should Samdaddy emerge victorious.

On a general not, PDP is Imo people's brightest chance chance of recovering Imo from the grip of the emperor Rochas Okorocha. Therefore anything make PDP not to have a governorship candidate for the 2019 polls is not in the best interest of the citizens of Imo State.

I had already sued for peace in this matter. But this post is targeting the segment of PDP members who are cheering on the case as if it would take the ticket from Emeka Ihedioha and give it to Samdaddy.

Kissinger Ikokwu is a legal practitioner based in Imo State.
Posted by IfeanyiCy Njoku
Labels: Opinion