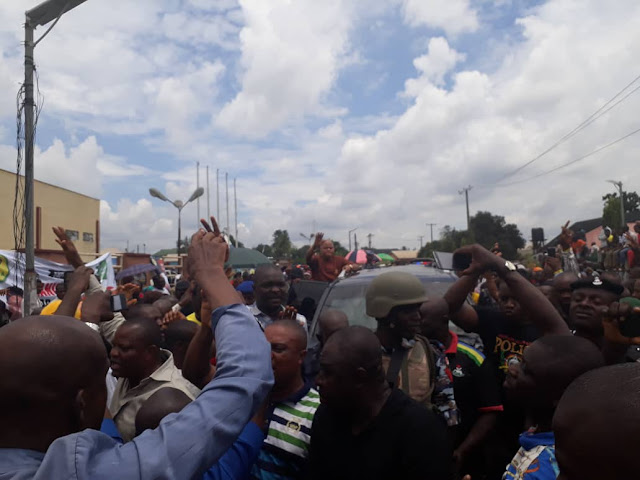 Rising from a crucial meeting of the Expanded Executive of the All Progressives Grand Alliance (APGA) IMO State chapter, held at the State secretariat of the Party in Egbu road, the Chairman, Barr Ezeobi told the members that the Primary of the Party in relation to the gubernatorial position had been conducted and a winner emerged in the person of Most Distinguished Senator Ifeanyi Godwin Araraume.
He told the Party Executives that he has the clear directives and instructions of the National leadership of the Party to pass this information and ensure that the Party gives him the maximum assistance and cooperation to enable him win the forthcoming general election.
Barr.  Ezeobi pleaded that those who are in any way aggrieved by the outcome of the Primary should Shealt their sword and work for the progress, overall interest and victory of the Party in the general Elections.
The Chairman employed all the Executive members to carry this message to their various booths, wards and local governments and ensure that frayed nerves are softened.
Barr. Ezeobi used the opportunity to appeal to the other Aspirants not to abandon the Party at this critical time ensuring that they will all be accommodated by the Grace of God if APGA form government in 2019.
The Executives made up of State Executives, Women Leaders from the 27LGA's Youth leaders from the 27LGA's and the LGA Party Chairmen, in their response they promised to work with the Candidate and ensure victory for the Party come 2019.