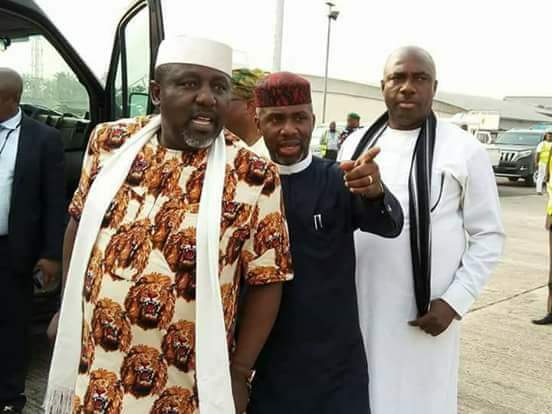 We have read media interviews by the duo of the former Governor of the State Chief Achike Udenwa and Dr. Ezekiel Izuogu and in the interviews they berated Governor Rochas Okorocha and spoke in manners that showed support for Chief Hope Uzodinma.
We are also aware of the roles of the Archbishop of Owerri Catholic Diocese, Bishop Anthony Obinna and that of the Former Chairman of the State Council of Traditional Rulers, Cletus Ilomuanya in the Imo APC imbroglio with Chief Hope Uzodinma at the centre.
These people can never love APC and President Muhammadu Buhari and would not also love Governor Rochas Okorocha who worked for the APC victory in Imo in 2015 and made President Buhari to have the highest number of votes in Imo in the South-East against their wish. They do not wish APC and President Buhari victory in 2019. That is the meaning or interpretation of their both open and tacit support for Hope Uzodinma
Chief Achike Udenwa is indeed envious of Rochas Okorocha because for the eight years he was governor on the ticket of PDP he could only talk about the State Secretariat as achievements which Governor Okorocha also rebuilt. Let him publish any other achievement of his administration and let Rochas publish his own achievements. How was Owerri when he was governor and how is Owerri today.
For Dr. Ezekiel Izuogu who is from the same Ideato South with Governor Okorocha. He has been contesting for the governorship of the State since the time of DPN in the late eighties. Ran again under SDP. Ran equally on the platform of APP. Ditto ANPP. And he has been contesting and has not been able to win any. At a time, he came up with Z6oo with the story that he has built a local car, with the hope too that such gimmick could win the governorship for him but all to no avail. But Rochas is today completing his second term. That is the reason for his own anger. Otherwise he would have been happy with his junior brother and who has done very well as governor.
In the case of Archbishop Anthony Obinna, he has never hidden his sympathy for APGA. He said it openly in 2015. And in 2015, he backed the governorship Candidate of APGA, Captain Emmanuel Iheanacho and the PDP Presidential Candidate Dr. Goodluck Jonathan. He does not like APC or President Buhari.
It is also not true that the Catholic Church in the State is not happy with Governor Okorocha. Rather, the members of the Catholic Church in the State had voted massively for him in 2011 and 2015 respectively. And he has done a lot to appreciate that Church.
In 2015, Governor Okorocha took President Muhammadu Buhari to Archbishop Obinna when he came on campaign. They met privately for hours. But two days after, his newspaper THE LEADER came up with the caption “Alhaji in Government House”, and told the false story of how Governor Okorocha was taking Igbo youths to the North to be Islamized. The medium uptil today has never seen any reason to give APC and President Buhari a chance.
Hope Uzodinma does not attend Church Services. But Uche Nwosu is an ardent member of the Catholic Church and he has done so much for the Catholic Church which has earned him awards and recognitions. Why would the head of the Owerri Diocese prefer someone who does not attend Church to someone who is a disciple in that Church. This is one million naira question.
For Cletus Ilomuanya, he is a product of PDP. Governor Okorocha removed him as a traditional ruler and as the Chairman of the State Council of Traditional Rulers because he was PDP personified. So, one does not expect him to love Okorocha or APC or President Buhari. His wish is to see PDP back to Power.
So their working together now in support of Hope Uzodinma whose claim of being a member of APC is not upto six months is very strange. And PDP Chieftains like Udenwa also supporting the Senator. These people cannot love APC or President Buhari.
That is to say the mission of these people is one. They want to destroy Imo APC and close the Chapter of the Party in the South-East because Imo as the only APC State in the South-East is the gateway of the Party to the rest of the geo-political zone. And it is also to be seen what will make these people to support APC and President Buhari in 2019.
They know that even one hundred Hope Uzodinmas cannot win Imo for APC. They also know why they have joined him against Rochas Okorocha. Rochas has been defeating them and will continue to defeat them by the grace of God.
The National Working Committee (NWC) of APC led by Comrade Adams Oshiomhole should know that these people do not love APC and its Candidates. And they know that with Rochas Okorocha, Imo would remain APC State. It is not negotiable.